A Romantic Boom and Bust 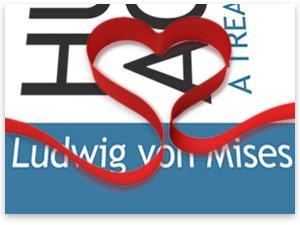 As a single, 21-year-old guy living in north Florida, I have found it hard to pick up girls by talking about economics. Perhaps it was an overdose of supply-and-demand charts in high school, but any mention of the E-word typically brings with it glassy eyes and the need to answer a phone that never rang. This is unfortunate. Everyone uses economics on a daily basis, and not just at the store or when you write a check. Our understanding of economics influences every aspect of our lives, whether we realize it or not. Valentine's Day gives me an excuse to demonstrate this truth in regard to romance.

When asked to define economics, I say it is the application of philosophy to the social issue of finite resources. One resource that is both finite and common to all people is time. Any action we take equates to a personal investment of the capital of time. Though time is often overlooked in economic calculation, it has always been a point of emphasis for economists of the Austrian School. It is not surprising that the economics of romance lends itself to Austrian interpretation. In fact an "Austrian romance cycle" would be very similar to the Austrian business cycle.

Romance starts with a first move. Just as Austrians understand that it is the role of the entrepreneur to shoulder the risk of capital investment in order to potentially achieve profit, we can understand that it is the role of an instigator to take the risk in the hope of finding romantic success. Without an entrepreneur, economic growth is unobtainable; without someone making a first move, romantic growth is unobtainable.

So lets take a guy, Adam, who walks into a party looking to find the girl of his dreams. Adam finds a girl, Betty, and instigates a conversation. If Adam has invested enough time in pursuing Betty that she is already interested in him, like an investor who has the money up front to start a business, Adam needs no credit to close the deal. But what if Adam hardly knows Betty? Like an investor using his business plan to earn a bank loan, Adam must now convince Betty that he is worth the risk of everything involved in matters of the heart.

If Adam behaves according to the philosophy of liberalism, if he represents himself honestly and allows his success or failure with Betty to come organically, then he may or may not connect with her, but his romantic life will be (relatively) drama-free; and when he does find a girl interested in him, the interest will be genuine.

But Adam has become frustrated by romantic failure. Fed up with his lack of success in romance, Adam begins to tell every girl who will listen that he saved orphans from the rampaging cannibals of Rojinda, climbed Mount Everest, and once out debated Ron Paul on the House floor. Adam has decided to manipulate his "interest rate."

All of a sudden Adam finds himself as the center of attention. Betty and Chelsea are fighting to get with him; Eve even starts trying to stake her claim when she hears that Adam grew up next to Justin Bieber! Adam finds himself in a romantic boom. As long as Adam can keep spitting out lies, and as long as people believe them, Adam's romantic success will continue.

At some point, however, Adam is going to have to pay the piper. Justin Bieber doesn't accept his Facebook request. No one can find the C-SPAN clip of him and Ron Paul. Wikipedia shows no island of Rojinda. Chelsea's brother was at church camp with Adam the summer he was suppose to be climbing Mount Everest. Adam's bubble has burst.

Betty slaps Adam. Chelsea tells all the girls at school, ruining his chances with all of them. Perhaps worst of all is that Eve, for whom Adam has since developed real feelings, and with whom he actually has a lot in common, never talks to him again. Adam's short-term gain has created long-term consequences far greater than he would have ever encountered by being honest in the first place.

Beyond simply demonstrating the natural fallacies of arbitrary manipulation of interest, economics also allows us to best manage our romantic life. I see firsthand the number of relationships that are based less on love and more on comfort — people staying together not because of how they feel about each other but because they dislike the feeling of being alone. This is once again an issue of long-term consequences for short-term gain. It is also an economic issue.

Time is finite. So every day spent in a relationship of comfort is another day lost that could have been spent in a relationship of love — there are opportunity costs here. In NBC's sit-com The Office, Pam spends the first two seasons engaged to her long-time and incompatible fiancé, Roy, rather than accepting the advances of her best work friend, Jim. Pam's refusal to risk the comfort of her passionless relationship with Roy doesn't change the fact that the two aren't meant for each other. A willingness to settle isn't the same as love. Pam eventually breaks up with Roy and later marries Jim in season six. While Pam and Jim may spend the rest of their fictional lives happily ever after, that happy life lost four years in the process.

Every action we take represents an economic decision. The old phrase "time is money" takes on a new meaning when you start applying economics to all aspects of life. It is also only an Austrian perspective of economics that is consistent with these out-of-the-box applications. And it is this realization that has made me an evangelical Austrian.