Rise of the Free-Market Zombies 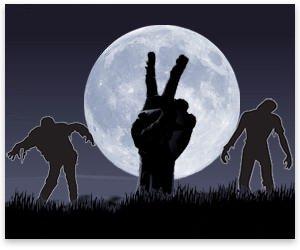 For his Sunday column, Paul Krugman wrote a piece titled "When Zombies Win." Krugman claims that "free-market fundamentalists" — including Ron Paul — have been successful politically, despite being thoroughly discredited by recent events. As we'll see, it's a good thing that these ideas of shrinking government refuse to die, no matter how often Krugman attacks them.

The opening paragraph explains the title given to Krugman's article:

When historians look back at 2008–10, what will puzzle them most, I believe, is the strange triumph of failed ideas. Free-market fundamentalists have been wrong about everything — yet they now dominate the political scene more thoroughly than ever.

Before moving on to Krugman's specific claims, we need to stop and remark on just how warped the above opening really is. For one thing, "free-market fundamentalists" have not been wrong about everything. It is true — as we'll get to shortly — that many opponents of fiscal stimulus and quantitative easing were warning of high interest rates and price inflation. Those threats have not materialized (at least yet), and on that score Krugman understandably can pat himself on the back.

But the free-market fundamentalists were certainly correct when they said that the Obama stimulus package would not pull us out of recession. It was not just Austrians but many Chicago School economists who were reminding the public of basic observations such as "the government can only spend what it first takes from the private sector."

At the time, Keynesians such as Brad DeLong and Krugman went ballistic at such crude thinking, but if anybody has been vindicated by what happened to employment and GDP in the last two years, it has been those who said the Obama stimulus would just make things worse.

It was not merely Christina Romer who famously predicted that unemployment without the stimulus wouldn't rise as much as it in fact did with stimulus. It was also Mark Zandi (whom Krugman later credited for his wonderfully accurate Keynesian models) who predicted in November 2008 (see page 21 of this pdf

) that real GDP without stimulus would fall by 2.2 percent in 2009. Then, with the Obama stimulus, the economy in fact fell by 2.6 percent that year.

As far as the free-market fundamentalists dominating the political scene "more thoroughly than ever," I suppose Krugman is right, in the sense that two French poodles could dominate a pit bull more than one French poodle could. But as the Fed discloses its cumulative $9 trillion in backdoor loans, as the FBI raids hedge funds, and as federal spending as a share of the economy is at its highest level since World War II, I hardly think that DC is being overrun by laissez-faire shock troops.

Nullificiation: Interview with a Zombie

To prove that free-market fundamentalists have seized power, Krugman's Exhibit A is Ron Paul:

How did that happen? How, after runaway banks brought the economy to its knees, did we end up with Ron Paul, who says "I don't think we need regulators," about to take over a key House panel overseeing the Fed?

Of course, if we look at the actual context of what Paul is saying, we find that he means it is foolish to trust government regulators to nip asset bubbles in the bud, while the Fed and other government programs do their part in fueling such bubbles. Ron Paul was not saying, "Let the banks do whatever they want," instead he was saying that we shouldn't be bailing them out when they screw up. Instead, let them go bankrupt just like any other business would after making horrible investment decisions.

In his article, Krugman has some good examples of "right wingers" who made predictions that, in retrospect, made them look foolish. But it's not as if the conventional Left is lacking in this category, even if we focus just on the housing bubble and bank crisis.

For example, Fed economists and Ben Bernanke himself denied that there was a housing bubble. Barney Frank — hardly a Jedi Knight of libertarianism — infamously defended the solvency of Fannie and Freddie up until their seizures.

And let us not forget Paul Krugman himself, who — it must be admitted — did indeed recognize the housing bubble before many others did. But, ironically, he praised Greenspan for creating it. Many people have pointed to Krugman's 2002 call for Greenspan to create a housing boom, but not as many saw Krugman endorse it after the fact, as this October 2006 exchange with one of his readers illustrates,

NEERAJ MEHRA, AMRITSAR, INDIA: Mr. Greenspan has done a disservice to the nation by creating the housing boom. As a layman-observer, that's the lingering thought I've had. Your article reaffirms it.

The question I have is this: Did he do the right thing — acting morally by engineering a housing boom, more as a bridge loan, until something else showed up at the horizon to shore up the economy — because he didn't have a choice, or did he undertake a path of mere political expediency? And, that's a question that's nagging me for a while.

Would appreciate it if you could shed some light.

PAUL KRUGMAN: As Paul McCulley of PIMCO remarked when the tech boom crashed, Greenspan needed to create a housing bubble to replace the technology bubble. So within limits he may have done the right thing. But by late 2004 he should have seen the danger signs and warned against what was happening; such a warning could have taken the place of rising interest rates. He didn't, and he left a terrible mess for Ben Bernanke.

Turning from monetary policy to other government efforts to spur the housing boom, Krugman's story — in which he tries to exonerate Freddie and Fannie, and pin the blame entirely on private-sector villains — keeps changing, as others constantly correct his facts. Raghuram Rajan gives the blow-by-blow account here.

Finally, regarding bank bailouts, many Austrian economists (not so many among other free-marketeers, unfortunately) were vehemently opposed to them, as the issue was being debated.

In contrast, Krugman was for the bailouts (though of course they were not the textbook ideal, in his opinion). Interestingly, when Krugman recently tried to argue that he and his heterodox peers were in favor of letting the Iceland banks go under, while the orthodox fuddy-duddies were in favor of bailing out Ireland's banks, this caused such cognitive dissonance among Krugman's readers (who remembered his support for TARP) that he had to explain his way out of the contradiction.

In sum, regarding the worldviews of Ron Paul versus Paul Krugman, here's what we can say:

Ron Paul thought it was a terrible mistake for Greenspan to fuel the housing bubble, for government agencies to encourage banks to lower their lending standards, and then for the Treasury (as well as the Fed) to bail out the big banks from their mistakes.

Krugman, in contrast, recommended that Greenspan blow up the housing bubble, and his only criticism was that Greenspan began raising interest rates to quell it, rather than simply jawboning the speculators. Krugman continues to downplay any role that the government had in encouraging reckless lending. Further, Krugman was in favor of bailing out the banks, who he thinks acted recklessly.

So if we are going to look at the current, dismal economy and blame somebody's policies for it, surely we can acquit Ron Paul. That doesn't by itself prove that Ron Paul's views are correct, but it certainly casts doubt on Krugman's constant claims that he himself has been a beacon of clarity over the years with his accurate Keynesian modeling.

Finally, let's turn to the one legitimate point Krugman makes in his article:

It's also worth pointing out that everything the right said about why Obamanomics would fail was wrong. For two years we've been warned that government borrowing would send interest rates sky-high; in fact, rates have fluctuated with optimism or pessimism about recovery, but stayed consistently low by historical standards. For two years we've been warned that inflation, even hyperinflation, was just around the corner; instead, disinflation has continued, with core inflation — which excludes volatile food and energy prices — now at a half-century low.

It is true that many opponents of massive deficits and money printing gave warnings of interest rates and price inflation that at best were premature; I myself fall into this group. This is unfortunate, because our mistaken warnings now give Krugman a convenient target when trying to distract people from the failure of Keynesian pump priming.

To tackle this issue would require another article in itself. For now suffice it to say that there are indeed plenty of signs that the Fed's inflation is distorting the economy, not least of which is the record price of gold. Even using the government's own numbers, producer prices are rising in proportion to how far removed they are from the unemployed, debt-ridden consumer. I have been a faithful reader of Krugman over the last two years, and I don't remember his predicting in early 2009 that oil prices would double in 15 months.

Paul Krugman is speaking nonsense when he argues that the last two years have demonstrated the failure of free-market policies. Despite his claims, it is encouraging to watch the growing respect given to Ron Paul and others espousing small-government rhetoric. If these rising stars of the liberty movement be zombies, we can only hope they have enough brains to get the job done.