Iceland lapsed into the largest recession of the new millennium more than two years ago. As Philipp Bagus and I argue in our new book, Deep Freeze: Iceland's Economic Collapse, the obvious culprit is an oversized banking system, which at its peak had assets amounting to 11 times the size of the small island's economy. But like many economic events, the key lies not in what is immediately apparent but in those causes and conditions that are veiled. Politicians, pundits and the population of the Icelandic nation have had a difficult time explaining how such a large financial sector could develop in the first place.

Like in many other countries of the world, Iceland's large, unstable banking sector developed with the advent of deposit insurance. While the fractional-reserve banking system has a tendency to lead to unstable consequences, this day of reckoning is thought to be offset by ensuring depositors that a backstop exists in times of turmoil. Banks that overissue fiduciary media and face reserve-draining runs are "saved" by an insurance scheme guaranteeing depositors their quickly disappearing funds.

While this guarantee may delay a damaging bank run, it also fosters an environment that breeds increasingly risky bank activity.

On the one hand, banks can take comfort in knowing that added risks will result in higher profits. Normally the profit-and-loss system limits risk-taking behavior by burdening market participants with any losses of their risky activity. Deposit insurance effectively socializes losses while leaving profits private. This allows banks to seek higher profits through increased risk taking while simultaneously alleviating their fear of losses.

On the other hand, a deposit-insurance scheme removes an important monitoring mechanism that disciplines the banking sector. A depositor who is threatened with losses on his deposits in the event that his bank goes bankrupt is keenly interested in its solvency. By removing the possibility that the depositor will not be paid out fully in such an event, there is little reason for a depositor to assess the solvency of a prospective bank.

As we outline, the Central Bank of Iceland (CBI) offered a unique deposit-insurance scheme to protect its domestic banking sector. This uniqueness is evident in two ways.

The first is that the CBI itself is the provider of this insurance. In many other countries this role is not given to the monetary authority, but is rather undertaken by the fiscal authority. Hence, in the United States, the Federal Deposit Insurance Corporation (FDIC) is a government corporation. In the eurozone, it is not the European Central Bank that provides deposit insurance but the national governments comprising the monetary union.

"The era of the omnipotent
central bank is coming to a close."

Leaving aside the question of whether the government has a role at all in providing deposit insurance, we can see a key difference. The government is under a budget constraint (at least in theory) whereby if it needs to fund its insurance scheme it must do so from taxes or debt issuance. In contrast, the central bank has the ability to monetize its own insurance funds as the need arises. We would expect that the government will feel some pain from having to allocate tax dollars to the insurance scheme, or in any case, more pain than the central bank will from monetizing this spending. Indeed, in 2008 the FDIC debated allocating additional funds to its reserves through increased premiums as bankruptcies in the United States mounted. No such debate occurred within the walls of the Central Bank of Iceland.

The second difference of Iceland's deposit insurance scheme is that it guarantees not only domestic Icelandic krónur deposits, but also those denominated in foreign currencies. The Central Bank of Iceland's website makes clear that regardless of the denomination of their deposit, a depositor can rest assured that their savings are safe:

Does the Fund guarantee deposits in foreign currency?

Are deposits in foreign branches of Icelandic banks guaranteed by the Fund?

Herein lays one of the main problems that Philipp Bagus and I discuss in chapter 4 of Deep Freeze. As an increasing amount of funding was made in foreign denominations, the CBI was increasingly unable to honor these obligations should they come due. Any central bank has the ability to inflate only the domestic money supply. While it's easy, then, to honor domestically (and nominally) denominated debts, a significant failing occurs when foreign liabilities are added to the mix.

Unable to cover its foreign liabilities during the liquidity crisis of 2008, the Central Bank of Iceland effectively went bankrupt. Only bailouts from friendly countries and the IMF staved off a more serious fate — the complete elimination of a central Icelandic monetary authority.

While Iceland's reemergence over the last two years has been mostly strong, there are still two unfortunate consequences to address.

First, by focusing on consequences and not root causes of its crisis, Icelandic authorities have missed an opportunity to correct one of the crisis's primary causes. The moral hazard of deposit insurance — especially a deposit-insurance scheme that was impossible to honor — allowed for the oversized banking system to develop. Removing such an insurance scheme would do much to rectify this issue. 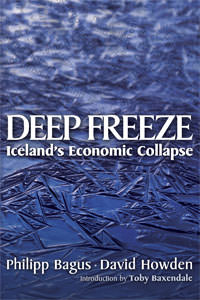 Second, Iceland is not alone in this regard. Several other countries of the world are also at a juncture where large amounts of foreign-denominated liabilities are unable to be funded by the domestic central bank. This in itself would not be a large problem, except for the fact that so many do think that they central bank will be able to solve the eventual funding gap.

The era of the omnipotent central bank is coming to a close, as their impotence in staving off these types of crises is exposed.

Deep Freeze: Iceland's Economic Collapse provides a case study in one country facing a banking crisis at the hands of its central bank. It provides a roadmap to anyone who wants to understand where these crises stem from, and how to avoid them in the future.