The Reality of Political Momentum 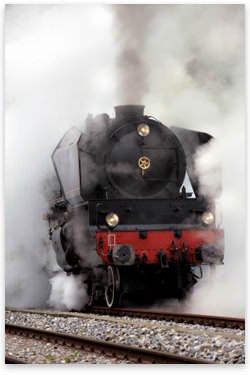 [Excerpted from The Man versus the State, 1884]

It is said that when railways were first opened in Spain, peasants standing on the tracks were not unfrequently run over; and that the blame fell on the engine drivers for not stopping — rural experiences having yielded no conception of the momentum of a large mass moving at a high velocity.

The incident is recalled to me on contemplating the ideas of the so-called "practical" politician, into whose mind there enters no thought of such a thing as political momentum — still less of a political momentum that, instead of diminishing or remaining constant, increases. The theory on which he daily proceeds is that the change caused by his measure will stop where he intends it to stop. He contemplates intently the things his act will achieve, but thinks little of the remoter issues of the movement his act sets up, and still less its collateral issues.

When, in wartime, "food for powder" was to be provided by encouraging population — when Mr. Pitt said, "Let us make relief in cases where there are a number of children a matter of right and honour, instead of a ground for opprobrium and contempt,"1 it was not expected that the poor rates would be quadrupled in 50 years, that women with many bastards would be preferred as wives to modest women because of their incomes from the parish, and that hosts of ratepayers would be pulled down into the ranks of pauperism.

Legislators who in 1833 voted £30,000 a year to aid in building schoolhouses never supposed that the step they then took would lead to forced contributions, local and general, now amounting to £6,000,000;2 they did not intend to establish a principle that A should be made responsible for educating B's offspring; they did not dream of a compulsion which would deprive poor widows of the help of their elder children; and still less did they dream that their successors, by requiring impoverished parents to apply to boards of guardians to pay the fees which school boards would not remit, would initiate a habit of applying to boards of guardians and so cause pauperization.3

Neither did those who in 1834 passed an act regulating the labour of women and children in certain factories imagine that the system they were beginning would end in the restriction and inspection of labour in all kinds of producing establishments where more than 50 people are employed; nor did they conceive that the inspection provided would grow to the extent of requiring that before a "young person" is employed in a factory authority must be given by a certifying surgeon, who, by personal examination (to which no limit is placed) has satisfied himself that there is no incapacitating disease or bodily infirmity — his verdict determining whether the "young person" shall earn wages or not.4

Even less, as I say, does the politician who plumes himself on the practicalness of his aims conceive the indirect results which will follow the direct results of his measures.

Thus, to take a case connected with one named above, it was not intended through the system of "payment by results," to do anything more than give teachers an efficient stimulus: it was not supposed that in numerous cases their health would give way under the stimulus; it was not expected that they would be led to adopt a cramming system and to put undue pressure on dull and weak children, often to their great injury; it was not foreseen that in many cases a bodily enfeeblement would be caused that no amount of grammar and geography can compensate for.5

Legislators who, some 40 years ago, by act of Parliament compelled railway-companies to supply cheap locomotion, would have ridiculed the belief, had it been expressed, that eventually their act would punish the companies which improved the supply; and yet this was the result to companies which began to carry third-class passengers by fast trains, because a penalty to the amount of the passenger-duty was inflicted on them for every third-class passenger so carried.

To which instance concerning railways, add a far more striking one disclosed by comparing the railway policies of England and France. The law-makers who provided for the ultimate lapsing of French railways to the state never conceived the possibility that inferior travelling facilities would result — did not foresee that reluctance to depreciate the value of property eventually coming to the state would [prevent] the authorization of competing lines, and that in the absence of competing lines locomotion would be relatively costly, slow, and infrequent; for, as Sir Thomas Farrer has lately shown, the traveler in England has great advantages over the French traveler in the economy, swiftness, and frequency with which his journeys can be made.

But the "practical" politician, who, in spite of such experiences repeated generation after generation, goes on thinking only of proximate results, naturally never thinks of results still more remote, still more general, and still more important than those just exemplified. To repeat the metaphor used above, he never asks whether the political momentum set up by his measure, in some cases decreasing but in other cases greatly increasing, will or will not have the same general direction with other like momenta — and whether it may not join them in presently producing an aggregate energy working changes never thought of. Dwelling only on the effects of his particular stream of legislation, and not observing how such other streams already existing — and still other streams which will follow his initiative — pursue the same average course, it never occurs to him that they may presently unite into a voluminous flood utterly changing the face of things.

Or to leave figures for a more literal statement, he is unconscious of the truth that he is helping to form a certain type of social organization, and that kindred measures, effecting kindred changes of organization, tend with ever-increasing force to make that type general, until, passing a certain point, the proclivity toward it becomes irresistible.

Just as each society aims when possible to produce in other societies a structure akin to its own — just as, among the Greeks, the Spartans and the Athenians struggled to spread their respective political institutions, or as, at the time of the French Revolution, the European absolute monarchies aimed to reestablish absolute monarchy in France, while the Republic encouraged the formation of other republics — so within every society, each species of structure tends to propagate itself.

Just as the system of voluntary cooperation — by companies, associations, unions, to achieve business ends and other ends — spreads throughout a community, so does the antagonistic system of compulsory cooperation under state agencies spread; and the larger becomes its extension, the more power of spreading it gets. The question of questions for the politician should ever be "What type of social structure am I tending to produce?" But this is a question he never entertains.

This article is excerpted from chapter 1 of The Man versus the State, 1884.

Herbert Spencer was one of the leading 19th-century English radical individualists. He began working as a journalist for the laissez-faire magazine The Economist in the 1850s. Much of the rest of his life was spent working on an all-encompassing theory of human development based upon the ideas of individualism, utilitarian moral theory, social and biological evolution, limited government, and laissez-faire economics.

The image comes from "The Warren J. Samuels Portrait Collection at Duke University."