QE2 and the Alleged Deflation Threat 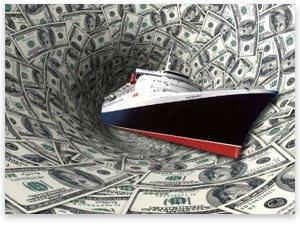 The markets and financial pundits are all abuzz over the prospect of another round of quantitative easing — "QE2" — in which the Fed may start buying yet another trillion dollars in assets after the elections. The justification for this massive bout of new inflation is, of course, the threat of deflation.

But if we actually look for ourselves, we see that prices are not falling. The Fed has already fueled another boom in various asset prices, just as it did when trying to provide a "soft landing" after the dot-com crash. The economy will never truly recover until the government and central bank let the market process take its course.

It is curious that the financial press and many major economists are so convinced that the United States is on the edge of a deflationary cliff, by which they mean that various prices are about to tumble. On his blog, Paul Krugman has been beating this drum for years, and to prove the case he'll cite graphs like this:

Now I have not studied the case of Japan and its "lost decade" (and counting) so I can't responsibly comment on its experience. However, if Krugman's treatment of the "lessons" of Herbert Hoover is any indication, I am skeptical that the Japanese episode really means what Krugman and other Keynesians keep telling us that it means.

There are several problems with the exclusive reliance on "core CPI" as a gauge of the tightness of monetary policy. First and most obvious, it is absurd to focus on the "core," which excludes food and energy prices. It is precisely these prices that are the most important for struggling households — and they are certainly not falling. According to the government's own figures, from September 2009 to September 2010, consumer food prices were up 1.4 percent, while consumer energy prices rose 5.4 percent.

Given that many households are either in financial distress or are terrified that they soon will be, is it really so surprising that consumers aren't spending gobs of money on things besides food and energy?

Another problem is that the Bureau of Labor Statistics can't very well document changes in product quality, which tend to mute price increases. To take an example offered by Silas Barta, the next time you open a cereal box, check out how flimsy the cardboard is; it was sturdier several years ago. I doubt that the government CPI figures take this sort of thing into account when telling us how weakly prices have responded to Bernanke's incredible bouts of money creation.

Looking at Other Prices

Besides nitpicking the construction of CPI data, there is the problem of focusing just on consumer prices in the first place. For example, according to the latest report of the Producer Price Index, in the last year prices for finished goods are up 4.0 percent, the prices for intermediate goods are up 5.6 percent, and prices for crude goods are up a whopping 20.3 percent.

But wait — there's more! According to economic theory, there's actually a very sensible reason to include asset prices when trying to determine the "cost of living." This is because most people don't want to live for a single day on milk and bread that they just bought at the grocery store. In principle an ideal price index would include prices for both present and future goods. As a convenient proxy, it makes sense to include asset prices when wondering whether monetary policy is causing the dollar to strengthen or weaken.

On that score, it certainly seems as if Bernanke's policies have been a "success," and that the United States is not heading into a "deflationary trap" as the pundits keep warning us. Gold keeps hitting new highs, and look at what happened to the stock market as Bernanke first bailed out the banks in late 2008, and then embarked on the first round of quantitative easing in early 2009:

The above chart should be frightening to anyone who believes that Greenspan's easy-money stance after the dot-com crash merely fueled the housing and stock bubbles. Bernanke is simply setting us up for another collapse.

Before closing, let's look at just one more graph. This time, it shows the strength of the US dollar compared to a basket of other currencies:

As the chart shows, the dollar briefly surged after the global financial panic in the fall of 2008. But since early 2009, the dollar has resumed its nearly decade-long slump. From its peak in 2002 to the present, according to this measure, the dollar has depreciated by more than 20 percent against other currencies.

It's true that some Austrian economists — including me — were warning that consumer prices would begin rising more quickly than they have so far. Even so, it is still hardly the case that the economy is on the verge of a "deflationary trap."

In any event, a free people have nothing to fear from falling prices. The market economy is quite resilient, if only the politicians and central bankers would let it operate. Nobody would be so foolish as to claim that the computer industry is stagnant because of constantly falling prices, and nobody breathes a sigh of relief that medical care keeps getting more expensive.

It was a futile attempt to evade a bad recession that led Alan Greenspan to blow up the housing bubble. Now Ben Bernanke is doing the same thing, only with far more intensity. If he really wanted to help the economy, Bernanke would stop debasing the dollar and would allow market prices to tell the truth.