The Progressive Theory of History 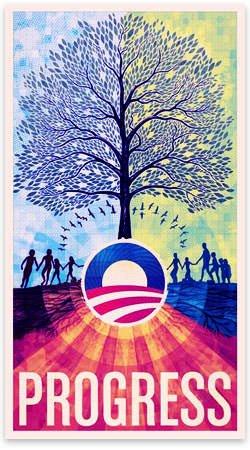 [Excerpted from an edited transcript of "Ideology and Theories of History," the first in a series of six lectures on the history of economic thought, given in 1986.]

The Whig theory of history began in the early to mid-19th century, and it has taken over: it's still with us. It's still dominant despite criticisms in the 1930s and '40s.

Basically, what the Whig theory of history says is that history is an inevitable march upward into the light. In other words, step by step, the world always progresses, and this progress is inevitable.

Now, the Whigs themselves were kind of lovable. They were moderate classical liberals. And when they coined the theory in the 1830s, '40s, and '50s, there was a certain amount of justification for it: indeed, if they looked back on the past, things seemed to be getting better and better. There was an increase in freedom, an increase in civilization and standard of living and science and knowledge, and so forth and so on.

And so, unfortunately, they made this impressionistic conclusion into a doctrine, saying, "This is inevitable." If this is 1870, we're better off in every way than in 1860, etc.

This is essentially determinist, this belief in inevitability, and it also puts the stamp of approval on everything in the past and present, because it says things like, Well, slavery now, of course, is bad from our perspective, but slavery in the old days was good because it was better than whatever the preslavery thing was.

Now, of course they had a problem with the Dark Ages, where everybody admits things got worse, from about the 5th to the 10th century AD, after the collapse of the Roman Empire. But they said, Well, that was one nonrepeatable glitch in the onward and upward march of progress.

Looking at it from the perspective of 1986, the idea that everything's always getting better is much shakier, obviously. The 20th century in many ways is the century of genocide. But the Whig theory of history is still flourishing — and has gotten even more hard nosed, so to speak, more locked in.

And getting to economics, we see this, unfortunately, among what we can call the Friedmanite or Buchananite theory of history, which is explicitly Whig to the core. The idea is that everything that existed was good to have existed, because it performed an important function. For example, in the famous Parsonian view of sociology, everything's got a function — everything fits in.

Well, I suppose you can look at things as having a function. I guess the slave master had a certain function. But the point is, was it a good function?

That's never asked, you see, because it's assumed that whatever existed should've existed. Ethics is not really mentioned, but it's implicitly derived from the fact that a given practice existed, and it existed for a certain period of time. It's sort of like an existence theory of ethics. Because if it lasted for a while, it must've been okay.

The fact that murder has lasted since the beginning of mankind (and theft, slavery, etc.) doesn't necessarily make it good, of course; it doesn't make it even functional.

Or we can look at it this way: Functional from whose perspective? From the perspective of the robber or the robbed?

At any rate, this Whig theory of history permeates economic history in particular. The worst example I know of is a book by Ekelund and Tollison — distinguished public choicers, Buchananites. The book is called Mercantilism as a Rent-Seeking Society.

Now, they don't pretend to do any historical research at all, and they're up front about that. They take Eli Heckscher's great book on mercantilism and simply engage in exegesis of it. Heckscher was magnificent. He wrote this book about 80 years ago, and there have been some advances since then, but we don't have to deal with that here.

What I'm interested in here is the Ekelund and Tollison method of analyzing stuff. They say that mercantilism is essentially a rationale for seeking monopoly privileges on the part of the merchants and the bureaucrats, etc.

I agree with that, except for the fact they use the word "rent-seeking," which I'm extremely critical of. This is something I hope to get back to later on, but it derives from the Ricardian theory of "rent," which is still extant, is still permeating, is still unfortunately dominant, based on the idea that rent is a differential, which can be easily taxed away: it's a nonproductive surplus, so to speak, and therefore can be taxed. That's like saying if Dustin Hoffman is making $1 million a year and Joe Zilch, another actor, is making $10,000 a year, the differential — Hoffman's $990,000 — can be taxed away without decreasing his productivity or our enjoyment.

But the important thing is that Ekelund and Tollison obviously interpret history according to the theories of Buchanan (and perhaps Stigler) who now believes, even though he's a historian of economic thought, that economic theory has had no influence whatsoever on events. Again, none whatsoever.

This is a behaviorist interpretation: ideas have no influence on history at all; it's purely economic interest.

Interpreting mercantilism works fine with this approach. But then Ekelund and Tollison have a question: How did mercantilism disappear? Why did free trade come in? If everybody's seeking monopoly privilege, and we accept the usual public-choice stuff about how consumers are not interested, and privilege seekers are always interested, then how did they get rid of mercantilism? Why isn't it locked in forever, as Stigler claims statism is locked in forever now?

The obvious explanation, for anybody who thinks that ideas are important, is the free-trade movement: a mass movement, consisting of merchants, lower classes, intellectuals, etc. The free-trade movement swept the board. It was a mighty ideological movement that got rid of this web of privilege.

But Ekelund and Tollison can't say that because they think ideology is unimportant. So what they say is they base it all on transaction costs!

The king is just one guy — I'll lobby him, and it's easy; transaction costs are low. To lobby 500 guys in Parliament becomes too expensive, and therefore they stopped lobbying and fell back on free trade as a faute de mieux, so to speak.

Any sillier explanation of any historical event I don't know of. This reaches rock bottom.

In the first place, there's no evidence that there's cheaper transaction costs. They seem to assume there's one king, and it's very simple to lobby him. But there's a whole court. Even if you have an absolute king, he's got lots of dukes and earls and mistresses and everybody else vying for power. It's probably just as expensive, just as high transaction costs, to lobby the king as it was Parliament.

And Ekelund and Tollison certainly present no evidence that it was cheaper.

But of course all this misses the fact: the real point is ideological; the thing that sweeps aside special privilege in history is ideology, despite the fact that these public-choice people claim that the ideological explanation is irrational because you're not devoted to it 24 hours a day — it's only ideology.

And yet some people are devoted to ideology, as we know full well right now with Ayatollah Khomeini. Obviously, the Khomeini movement was not founded out of cost-benefit analysis and economic interest. It was founded out of deeply felt, passionate ideology, which swept aside all vested interests. (Not that I'm in favor of the result of the Khomeini movement; I'm simply saying that ideology is extremely important in history.)

This is where I think Hayek of course is far superior. I think one of the best things Hayek ever wrote was "Intellectuals and Socialism," which I recommend to everybody here. This is how ideas influence history: they start out with theoreticians, and they permeate down to what Hayek calls "secondhand dealers in ideas," which I think is a very good term — journalists and activists — then they start permeating through the general public.

If you put it into cost-benefit terms, you can say that ideology then becomes a deeply held value on the part of people, superseding even transaction costs, something which you're devoted to, you devote your life to.

(Can you imagine anybody devoting their life to minimizing transaction costs?)

Then the Marxists, too, fall back on this historicist viewpoint. Marxists are very antislavery now (some forms of slavery, not their own), but slavery in the old days was good because it was better than whatever the other thing was. Serfdom was better than slavery.

So they too have this Whig theory, this historicist theory, and the revolution becomes inevitable.

By the way, this is why Marxists and semi-Marxists always use the terms "progressive" and "reactionary." I don't know if any of you have ever thought about the use of those terms.

To Marxists, the highest moral or the only moral truth is when you're in favor of the inevitable revolution, being in tune with the inevitable laws of events.

Progressives, then, are the people who are in tune with the next phase of the inevitable historical development, like the proletarian revolution. Reactionaries are those who are opposed to it.

In other words, the whole terminology of "progressive" and "reactionary" is one that is used on an implicitly ethical basis: it's really a question of who's in tune with the coming event and who isn't. Who's in touch with the zeitgeist (or the coming zeitgeist) and who's not in touch with it? That's the only standard.

Schumpeter, in his introduction to Capitalism, Socialism, and Democracy, claimed that socialism was inevitable, but for very different reasons than the Marxists did. He claimed it was inevitable for one reason: because capitalism breeds intellectuals who subvert it.

He said, People say that because I think that socialism is inevitable means I'm in favor of it. Quite the contrary. Why can't you say that if your boat — we're in a canoe and the canoe is leaking — if you think sinking is inevitable, it doesn't mean you're in favor of it. You can try to fight against it and postpone it as long as possible.

(According to the Marxists, if it's inevitable it means it's good.)

To conclude about the Whig theory of history, the major, deeper underlying problem is that if people have free will and have freedom to make choices, then there are no determinist laws of history. The Whig theorists ignore free choice and ignore the great moral problems, because free choice involves moral choices. They do not realize that history is a great moral drama, a drama of advance, of conflicts, of retrogression, of good versus evil.

And to wind up at my own doctrine about history, following Albert Jay Nock, history is essentially a race or a conflict between state power and social power, as Nock put it. Social power is a network of voluntary interactions: the economy, civilization, everything that is voluntarily interacting. Nock calls that social power.

And state power, of course, is the State. It's always trying to repress social power, cripple it, tax it, loot it, etc.

So history becomes a race between these two forces.

This article is excerpted from an edited transcript of "Ideology and Theories of History," the first in a series of six lectures on the history of economic thought, given in 1986.