Professor Klein on Beating the Odds 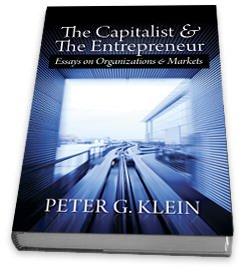 [Foreword to The Capitalist and the Entrepreneur: Essays on Organizations and Markets]

Is it that simple? If more classes, websites and conferences are offered will we really have more Ewing Kauffmans? Kauffman as a child was bedridden for a year with a heart ailment but used the time to read 40 books per month. After WWII he worked as a pharmaceutical salesman until, with a $5,000 investment, he started Marion Laboratories. Company sales were just $39,000 in the first year of operation but four decades later Kauffman's company would have revenues totaling $930 million. In 1989, Kauffman merged Marion with Merrell Dow Pharmaceuticals, making more than 300 millionaires of Marion investors and employees.

Kauffman himself would likely have not stepped into the role of entrepreneur if not for the stupidity of his employer, Lincoln Laboratories. A natural salesman and hard worker, Kauffman in just his second year earned more in commissions than the company president did in salary. In response, the president cut Kauffman's commissions. Despite the reduction, Kauffman still out-earned the Lincoln head man the following year, so "he took away some of my territory, which was the same as taking away some of my income," Kauffman related later. "So, I quit and I started Marion Laboratories in the basement of my home."

The government can talk about entrepreneurship and act like it is promoting it, but all of what government does by taxing and regulating impedes the entrepreneur. It's hard to imagine that even Ewing Kauffman could make a similar initial investment today (roughly $44,000 adjusted for inflation), start a firm in his basement, and build it to a billion-dollar company. The local authorities in Kansas City were not all that concerned about a fledgling pharmaceutical company operating from Kauffman's home in 1950. Today, there would be permits to obtain, approvals to be gained and license fees to pay. The majority of the legislation that has given the Food and Drug Administration (FDA) its enormous power was enacted after Kauffman's company was up and running.

"The government can talk about entrepreneurship and act like it is promoting it, but all of what government does by taxing and regulating impedes the entrepreneur."

But as long as there is some shred of a market available, entrepreneurs find a way. They see opportunities others don't. They take financial risks that most people would consider unfathomable. The government edicts, bureaucratic roadblocks, and oppressive taxation that discourage the hardiest of souls only serve to challenge and inspire creative entrepreneurs while weeding out potential competitors. All of the wonderful goods and services that we enjoy are due to entrepreneurship and the firms that are created to carry out the dreams of the entrepreneur and serve customers.

It is the firm where most people work. Maybe its a small firm or a big one or one in-between, but unless one is a solo contractor most people trade their time and talent for a paycheck to pay the bills. The vast majority of working people don't give much thought to this framework. They clock in, they clock out. Payday every couple of weeks. At the same time most people will spend the majority of their nonsleeping hours on the job, working for a firm or series of different firms. And work life may be the single most important part of a person's life. Reportedly, 95 percent of the people who are happy on the job are happy with their life as a whole. But salaried workers, from the lowest paid to the highest, take no risk. And although they are critical to the production of products and services, they are a cost of doing business.

Conversely, the entrepreneur is only paid when the market accepts his or her product. If the market rejects the product, the entrepreneur is not only not rewarded, but most times will lose capital that had been saved previously and was invested in the idea and production. As Kauffman explained, "The odds were strongly against me when I started. There were two or three thousand pharmaceutical businesses started after World War II, and only three ever really succeeded."

As vital as entrepreneurship and the firm are to the working of the market and the lives of virtually all working men and women, most schools of economic thought are silent on the subject. Even the work that has been done is incomplete and contradictory. Economists can't even agree on what entrepreneurship is or what exactly entrepreneurs like the late Ewing Kauffman do. And the apparatus that facilitates the manifestation of the entrepreneurial vision — the firm — is but a "black box" where inputs enter and outputs emerge, like so much magic.

"Entrepreneurship can't be formulated in equations and sprinkled like pixie dust on the masses by government initiatives or well-meaning foundations with the hopes that the inner entrepreneur in every citizen will be summoned."

But like so many market phenomena that modern economics chooses to ignore or get wrong, an Austrian economist has entered the black box, examining its contents for a better understanding of, not only what entrepreneurs are, but also what they do and why they do it. Peter G. Klein has devoted his entire career to understanding the entrepreneur and the firm, bringing a distinctively Austrian approach to the problem while drawing from what all schools of thought have to contribute.

This book contains the fruit of Dr. Klein's labors. And while the majority of the book was taken from articles appearing in academic journals, this book should not only be read by students and academics. Klein provides valuable insight that business owners and managers will find useful. As heroic as the entrepreneur may appear or thoughtful as the manager may seem, they don't operate in a vacuum. Often they have no one to talk to and nothing to keep them in check but their own egos, which in many cases offers no check at all, but the opposite.

The yearning for knowledge in this area is considerable. Considerable space at most any bookstore is provided for the many and varied management books. There are nearly as many different management books offered as diet books, with each genre being as faddish as the next. Management theorists crank out a continual stream of books full of business advice that "readers find unreadable," writes The Economist's Adrian Wooldridge, "and managers find unmanageable."

While many great entrepreneurs cash in by writing books about their management secrets and entrepreneurial exploits, their supposedly keen insights are often weathered by time and selective memory. But most importantly, these books imply that capital is homogeneous, that the would-be entrepreneur can do what Jack Welch did, or emulate T. Boone Pickens, or apply Ewing Kauffman's strategies and expect the same result. That kind of book is good for inspiration but nothing more.

As Klein makes abundantly clear, capital is instead heterogeneous. Entrepreneurship can't be formulated in equations and sprinkled like pixie dust on the masses by government initiatives or well-meaning foundations with the hopes that the inner entrepreneur in every citizen will be summoned. Although the brilliant Mr. Kauffman supported the use of his accumulated wealth to support programs promoting entrepreneurship, such programs are often a malinvestment of capital. And the use of taxpayer dollars towards such an endeavor is doubly wasteful.

It is however vital that we understand the function of the entrepreneur and the process that is so critical to the advancement of society and the well-being of its members. As Klein pries open the entrepreneurial black box, the glories and special talents of the entrepreneur are exposed, along with the limitations of the firm. The market environment that allows entrepreneurs to thrive is revealed. It is not that the society requires multitudes of entrepreneurs, but only that those with this rare talent be allowed to flourish unfettered. And for those readers who work for an agreed-upon wage helping some entrepreneur become wealthy, an appreciation is gained with the realization that ultimately it is only by satisfying customers that their entrepreneur bosses become successful.