The Problem with Idolizing "Efficiency" 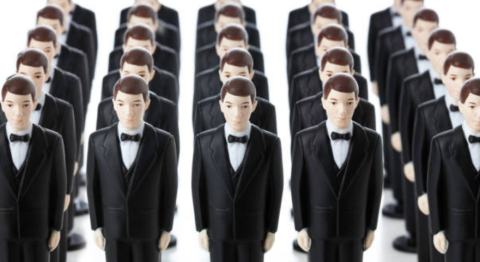 Radical Markets has at least one virtue. The book contains many unusual proposals, and I propose to concentrate on one of the strangest of these. Eric Posner, a legal scholar, and Glen Weyl, a principal researcher at Microsoft, call for speculative boldness, and they have given us that; but sound argument is another matter.

The authors agree with prevailing leftist dogma on one matter, but differ with it on another. They accept the conventional wisdom that inequality in the world economy is extreme. “Together, the trends of rising inequality and stagnating growth mean that typical citizens in wealthy countries are no longer living much better than their parents did. ... These trends pose the same problem for the neoliberal economic consensus that stagflation posed for the Keynesian consensus before it. We were promised economic dynamism in exchange for inequality. We got the inequality, but dynamism is actually declining.”

Posner and Weyl do not discuss skeptics about the rise of inequality, such as Thomas Sowell and the authors of Anti-Piketty. Let us leave that point, vital as it is, to one side. They also fail to address this question: why is inequality bad? Like almost all egalitarians, they just assume that it is and proceed from there. Though they continually call for fresh thinking, they never question this prevailing shibboleth of our age.

They differ with the left, though, in their view of markets. For Posner and Weyl, the market deserves praise: “Our premise is that markets are, and for the medium term will remain, the best way of arranging a society.”

Posner and Weyl support markets and favor equality. The free market does make the poor, along with everyone else, better off; but this does not for our demanding authors suffice. The market allows too much inequality.

What then is to be done? The authors have detected a crucial flaw in markets as they are now constituted. Markets are not perfectly competitive, “meaning that there are a small number of homogeneous commodities, and no individual holds or buys a large fraction of them.” Because of this, most buyers and sellers have “bargaining power.” This wastes time and resources. “Each party works hard to ascertain what the other would be willing to pay or accept and jockeys for the best price possible. Such strategic behavior often causes trades to fail. Even when they succeed, huge amounts of time and effort have been wasted in the process. These problems are magnified in complex business transactions.” In other words: bargaining power withholds vast amounts of resources from the market.

Just as the authors never pose the question, why is inequality bad, they never provide an argument that all resources should at all times be available for sale. Why is it bad to withhold resources in the hope of better terms later? We are never told.

The best the authors manage is this: “How can we measure ‘the greatest happiness for the greatest number’? How is it possible to compare the happiness of one individual to that of another? Many economists have argued that this task is impractical. They suggest that all we can hope for is ensure that no one’s happiness can be increased without decreasing anyone else’s, a condition called Pareto efficiency, and that the total happiness is distributed fairly.”

Now the cat is out of the bag. If an increase in the monetary value of resources is taken as roughly equal to an increase in utility, then bringing withheld resources into the market generates efficiency gains. It is Pareto superior, as neoclassical economists phrase it.

This merely pushes back our question: why should Pareto efficiency be the criterion by which economic

policies are assessed? Murray Rothbard has trenchantly remarked: “there are several layers of grave fallacy involved in the very concept of efficiency as applied to social institutions or policies: (1) the problem is not only in specifying ends but also in deciding whose ends are to be pursued; (2) individual ends are bound to conflict, and therefore any additive concept of social efficiency is meaningless; and (3) even each individual’s actions cannot be assumed to be ‘efficient’; indeed, they undoubtedly will not be. Hence, efficiency is an erroneous concept even when applied to each individual’s actions directed toward his ends; it is a fortiori a meaningless concept when it includes more than one individual, let alone an entire society.”

How do Posner and Weyl propose to curtail bargaining power? Their solution is a “common ownership self-assessed tax (COST) on wealth.” In this proposal, everyone would set a price for each of his assets, and that assessment would be the basis for taxes. If you object that people would set this assessment absurdly low to avoid taxation, here the ingenuity of the scheme emerges. Once someone makes his self-assessment, anyone could purchase the asset at that price. In this way, efficiency goes up, because the purchaser would not buy the asset unless he thought he could generate a greater return than he paid for it. Wealth, our proxy for efficiency, rises, and bargaining power has been curtailed.

To this there is an obvious objection, and the authors have a response to it. The objection is that an investor would not buy an asset he wanted to develop over a number of years if he thought someone else could purchase it from him by paying his assessment price. They answer by lowering the tax rate; people who had to surrender less of their gain to the state would invest more. That is indeed so, but would this not defeat the purpose of the efficiency plan? With lower taxes, people would, in order to deter buyers, raise their self-assessment prices for assets they wanted to keep. You would no longer find it so easy to snatch someone’s assets out from under him. Posner and Weyl respond: “When the tax is reduced incrementally to improve investment efficiency, the loss in allocative efficiency is less than the gain in investment efficiency.” “A fully implemented COST,” they suggest, “could increase social wealth by trillions of dollars every year.” Further, the vast revenue generated by taxes on the added wealth could be used to reduce inequality.

The authors admit a drawback to their plan. What if you have assets that you do not wish to sell at any price? Is the only way to avert the chance someone will purchase your asset to set a price on it that will subject you to crushing taxation? They suggest averting this through exemptions; but they have a more fundamental response: “The COST could also make us think about property in a different and healthier way. A COST taxes objects, not personal relationships. Wouldn’t it be better if people invested less of their emotional energy in objects and more in their personal relationships? ... Fetishistic attachment to a privately owned automobile — an extremely expensive durable asset ... is, thankfully, becoming a thing of the past. Increasing economic evidence suggests that excessive attachment to homes is inhibiting employment and dynamism in the US economy, a problem a COST would greatly reduce.”

When I read the authors’ account of COST, I wondered: if the authors are so concerned to increase social wealth, why allow individuals to choose their occupations? What if you could generate more revenue in a different occupation from the one you prefer? Suppose that a writer could earn vastly more money as a stockbroker. Should he be free to deprive society of all the taxable wealth he would earn in the higher paying job?

Sure enough, the authors head in this direction, though they draw back from its implications. “Consider a very radical extension of the COST: to human capital ...  imagine that individuals were to self-assess a value of their time, pay a tax on this self-assessed value, and stand ready to work for any employer willing to pay this wage ... in principle, A COST on human capital would be immensely valuable.”

Unfortunately, society is not yet ready for this proposal. “A COST on human capital might be perceived as a kind of slavery — incorrectly in our view, at least if the COST were properly designed. Still, we can see the problem.” For now, the proposal is premature.

Whatever the defects of their ideas, though, do not Posner and Weyl deserve credit on one score? They do, after all, say that markets “are ... the best way of arranging a society.” Alert readers will have noticed, though, a qualification in the passage where they say this, quoted earlier in this review: “and for the medium term will remain.”

What do they mean by this? They pay generous tribute to Mises’s socialist calculation argument, but unfortunately they misunderstand it: “The brilliant economist Ludwig von Mises argued that the fundamental problem facing socialism was not incentives or knowledge in the abstract but communication and computation.” Mises’s socialist critics argued that there was “no difficulty in principle with solving a (very large) system of equations relating the supply and demand of various goods, resources, and services.”

Mises was right. “Yet the later development of the theory of computational and communications complexity vindicated Mises’s insights. What computational scientists later realized is that even if managing the economy were ‘merely’ a problem of solving a large system of equations, finding such solutions is far from the easy task that socialist economists believed.” New developments in parallel and distributed processing, though, may enable these problems to be solved, and the market as we know it may be superseded. Mises is thus a pioneer in computer science. One can only quote, on Mises’s behalf, Eliot’s lines in “The Love Song of J. Alfred Prufrock”: “That is not what I meant at all;/ That is not it, at all.