Private Property and the First Thanksgiving 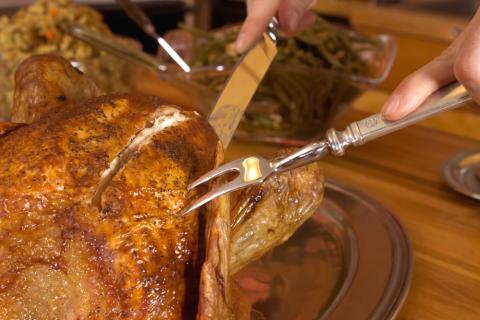 At Thanksgiving, Americans reflect on their blessings and hope for uplifting family gatherings of togetherness and unity, with the Pilgrims used as examples of peace, harmony, and thankfulness. However, while the Pilgrims' 1623 "way of thanksgiving" represents what we wish to infuse in Thanksgiving, Plymouth Colony before 1623 was closer to a Thanksgiving host's worst fears—resentments surface, harsh words are spoken, and people turn angry and unhappy with one another.

The Pilgrims' unhappiness was caused by their system of common property (not adopted, as often asserted, from their religious convictions, but required against their will by the colony's sponsors). The fruits of each person's efforts went to the community, and each received a share from the common wealth. This caused severe strains among the members, as Colony Governor William Bradford recorded:

" . . . the young men . . . did repine that they should spend their time and strength to work for other men's wives and children without any recompense. The strong . . . had not more in division . . . than he that was weak and not able to do a quarter the other could; this was thought injustice. The aged and graver men to be ranked and equalized in labors and victuals, clothes, etc . . . thought it some indignity and disrespect unto them. And the men's wives to be commanded to do service for other men, as dressing their meat, washing their clothes, etc., they deemed it a kind of slavery, neither could many husbands well brook it."

Bradford summarized the effects of their common property system:

"For this community of property (so far as it went) was found to breed much confusion and discontentment and retard much employment that would have been to their benefit and comfort . . . all being to have alike, and all to do alike . . . if it did not cut off those relations that God hath set amongst men, yet it did at least much diminish and take off the mutual respects that should be preserved amongst them."

How did the Pilgrims move from this dysfunctional system to the situation we try to emulate in our family gatherings? In the spring of 1623, they decided to let people produce for their own benefit:

"All their victuals were spent . . . no supply was heard of, neither knew they when they might expect any. So they began to think how they might raise as much corn as they could, and obtain a better crop than they had done, that they might not still thus languish in misery. At length . . . the Governor (with the advice of the chiefest among them) gave way that they should set corn every man for his own particular, and in that regard trust to themselves. . . . And so assigned to every family a parcel of land . . . "

The results were dramatic:

"This had very good success, for it made all hands very industrious, so as much more corn was planted than otherwise would have been by any means the Governor or any other could use, and saved him a great deal of trouble, and gave far better content. The women now went willingly into the field, and took their little ones with them to set corn, which before would allege weakness and inability, whom to have compelled would have been thought great tyranny and oppression."

That was quite a change from their previous situation, where severe whippings had been resorted to as an inducement to more labor effort, with little success other than in creating discontent.

Despite the Pilgrims' increased efforts in 1623, a summer drought threatened their crops. Following their beliefs, they offered contrition for their sins. Then the drought broke, which led to the Thanksgiving we still try to emulate. And as historian Russell Kirk reported, "never again were the Pilgrims short of food." It is appropriate to remember the Pilgrims as Americans celebrate Thanksgiving. Though we have incomparably more than they did, we can learn much from their "way of thanksgiving."

But we should also remember that our material blessings are the fruits of America's system of private property rights, whose power for peaceful and productive cooperation the Pilgrims began to prove by experiment almost four centuries ago, because those rights, and the freedoms and prosperity they entail, are under constant assault today.