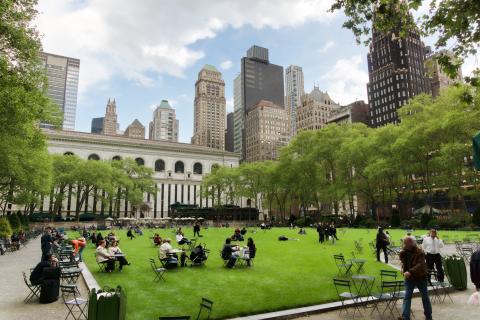 A small park in the middle of Manhattan stands out at first sight.

It appears to be cleaner. No matter the time of day one goes for a stroll there, one always seems to come across people cleaning up the place. There are restaurants and sandwich shops doing a brisk business in this park, which is behind the New York Public Library. This little place seems to merit more police than any other park. The police also seem to be vigilant. No one is allowed to lay over the steps. There is no harassment of parkgoers.

Yet, despite its tranquility, there appears to be much more going on than in the average park. The park has regular concerts. A merry-go-round delights children. There are restaurants and other commercial establishments at both ends of the park. One thinks, this must be the best city park in existence.

This is Bryant Park, which, although still owned by the city, is managed, policed and run by a private corporation, one of the largest experiments of its kind in the nation. This corporation saved this historic park from the depths of degradation. It brought in commerce, which was happy to pay large rents to the corporation because the park has become an urban oasis.

And, thanks to these businesses, the corporation was able to generate healthy revenues. This money no longer goes into a giant city pot, where much of it would disappear, often misappropriated for crazy projects or sometimes stolen. Under the previous system of city operation, most of the money never would come back to the park. It has been quite a trek for those in the private sector who set out to save this historic park.

Just a few years ago, Bryant Park was known by most New Yorkers as a dive. This relatively small park, in the middle of one of the most congested areas in the world, was once a notoriously dangerous place. It was famous for its lunchtime drug addicts and dealers who seemed to own this egregious city park. Unless one was a mugger, drug dealer or drug addict, there was usually no reason to go into the park.

The grim joke among New Yorkers was that the police only went into the park after someone was murdered to identify the victim, then they quickly departed. Now police in the park never depart. That's because Byrant Park has its own police force, which is a private force.

Back in the 1980s someone came up with an idea that was so old, it was new. Why not have private management take over the park? They couldn't do a worst job than New York City, a municipality famous for high taxes and venality.

"There were 150 robberies in Bryant Park in 1979. We had drugs. We had all sorts of problems," said Daniel A. Biederman, executive director of the Bryant Park Restoration Corporation (BPRC), which was founded in 1980 by Biederman and Andrew Heiskell, former chairman of Time Inc., along with the assistance of the Rockefeller Brothers Fund.

The BPRC's charter calls for it to use "the best techniques of private business." It is committed to methods that put it at odds with politics in management and policies such as affirmative action. BPRC officials say they "will make all decisions on the merits, especially in hiring only the best people at all levels of our staff." Homelessness? The park's mission statement calls for it "to aid troubled and poor citizens, to the benefit of both them and our neighborhoods."

About a decade after private management, the BPRC plan has been acclaimed a huge success, even in a city as famous for its municipal socialism as its high taxes (Money Magazine once called New York "tax hell."). Crime is almost non-existent in the park and in the surrounding 50-block area which is close to Grand Central Terminal. Crime is down some 73% since the Grand Central Partnership, a business improvement district founded by Biederman and real estate attorney/developer Peter L. Malkin, began operating. Bryant Park, which is now patrolled with private police and kept clean with its own crews, has won numerous awards, including the Urban Land Institute Excellence award.

Biederman notes that, during the recently concluded administration of Mayor Rudolph Giuliani, the city government was hostile to the concept of the business improvement district. Now, with a new mayor, Michael Bloomberg, and the city, once again on the verge of another fiscal crisis, city government, he says, seems friendlier to private management. Biederman says that it is possible that the Bryant Park model might be expanded to other city properties.

There's no reason why private sector techniques can't be used and used again, he added.

"There is nothing that we have done in Bryant Park that couldn't be done in other city parks and that couldn't be done with other city facilities," Biederman says. And indeed this may be exactly the time when the experiment on private management of public parks may be extended to other parks and in other cities. The city's liberal establishment has generally resisted privatization efforts that have been tried in many other places in the United States and the rest of the world.

A tree grows in mid-town Manhattan. There's no reason why many others can't be grown elsewhere in this nation.