The Power of The Theory of Money and Credit 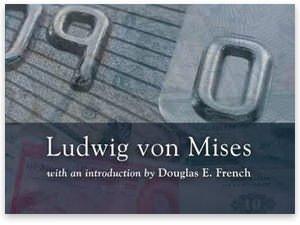 12/10/2009Doug French
With the great bursting of the real-estate bubble in 2008, the federal government is reforming and expanding its regulatory oversight in hopes of legislating away booms and busts. Recent decades have featured a series of speculative manias followed by harrowing financial busts, with central banks applying the same tonic — a flood of monetary stimulus — to salve the nation's financial wounds. The repeated stimulus has only served to create new bubbles, continued malinvestment, and more financial pain. The Federal Reserve's easy-money response to the collapse of Long-Term Capital Management in 1998 led to the dot-com stock bubble and bust, which lead to even more monetary easing, which begat the housing bubbl

Back in August 2002, Keynesian economist Paul Krugman, who would win the Nobel Prize in economics six years later, editorialized in the New York Times:

This was a prewar-style recession, a morning after brought on by irrational exuberance. To fight this recession the Fed needs more than a snapback; it needs soaring household spending to offset moribund business investment. And to do that, as Paul McCulley of Pimco put it, Alan Greenspan needs to create a housing bubble to replace the Nasdaq bubble.

And create a housing bubble he did: by increasing the money supply nearly 30 percent in just the two years after Krugman wrote his column. But in the aftermath, government now seeks to legislate stability. "Over the past two decades, we have seen, time and again, cycles of precipitous booms and busts," US President Barack Obama told reporters as his administration rolled out new regulations to increase market stability. "In each case, millions of people have had their lives profoundly disrupted by developments in the financial system, most severely in our recent crisis."

The current chief economic advisor to the president of the United States, Lawrence Summers, speaks often of "creating a new foundation for a less-bubble-driven economy," with the idea that more regulation of the fractionalized banking system cartelized by a central bank will create such stability. Despite causing the worldwide economic instability, central banks around the world are set to expand their reach to supervise the markets that their interventions distort.

"There is a logic to the systemic regulator being the central bank as they control monetary policy and can prick an asset bubble," Barbara Ridpath, chief executive of the International Centre for Financial Regulation told Reuters.

Ms. Ridpath is talking about the same Federal Reserve that has diabolically crushed the value of the dollar since its inception in 1913 and especially since 1971 after the faintest of the remaining ties to gold were severed. And now with the latest crisis, has expanded in unprecedented fashion. "Well and truly," writes Grant's Interest Rate Observer, "the Fed isn't your father's central bank. The new, supersized Fed piles a huge superstructure of risky assets on a tiny sliver of capital."

So while governments and their friends are stumping for central banks to have more regulatory power, Grant's, using the work of Peter Stella at the International Monetary Fund, says "that if the Fed's own examiners were handed the Fed's own financials (unlabeled of course) and asked to render a regulatory decision, they would order the place shut down."

It is not lack of regulation that has caused the current depression — which is the economy desperately gasping to recover from multiple decades of Keynesian monetary stimulus and its disastrous effects. But politicians, bureaucrats, regulators, modern financial commentators, Nobel Prize–winning economists and central bankers have proven they lack any knowledge of what money is and what causes business cycles.

It was Ludwig von Mises, as Murray Rothbard wrote in Economic Depressions: Their Cause and Cure, who "developed hints of his solution to the vital problem of the business cycle in his monumental Theory of Money and Credit, published in 1912, and still, nearly 60 years later, the best book on the theory of money and banking."

But Mises's great work has been ignored by policy makers. The federal response to the 2008 meltdown is 12 times greater than that to the Great Depression of the 1930s, according to Grant's. And yet even this is not viewed as enough to save the economy.

The Financial Times reports the existence of a Federal Reserve staff memorandum that makes the case for a −5 percent federal funds rate. Meanwhile Japanese authorities are toying with the idea of outlawing cash in that country. Despite using every fiscal trick in the book and keeping interest rates at zero for a decade, that economy has been mired in a postbubble depression. So the thinking is that nominal interest rates of zero are too high and current "theory would suggest that nominal interest rates of −4 per cent might be closer to what is required to rescue the economy from another deflationary spiral," reported the Times Online.

These developments would not have surprised Mises. In discussing "The Freely Vacillating Currency," he wrote that the United States was "committed to an inflationary policy," and except for the "lively protests on the part of a few economists" the dollar would have been on its way to being "the German mark of 1923."

Indeed America's debts at this writing exceed those of Germany in 1923 — even relative to the size of the US economy, author and financial commentator Bill Bonner writes, in fact 100 times greater.

"Yet the future of the dollar is precarious," Mises presciently penned in The Theory of Money and Credit, "dependent on the vicissitudes of the continuing struggle between a small minority of economists on the one hand and hosts of ignorant demagogues and their 'unorthodox' allies on the other hand."

As this new edition is being produced, the ignorant demagogues and their powerful allies are having their way, with all of us paying the price, and with prospects for the future bleak. But it is the demand for the republication of Mises's great monetary work that gives us hope — hope that a new generation of economists will learn from this masterwork and take up the struggle for sound money and honest banking that will unleash capitalism's restorative magic.