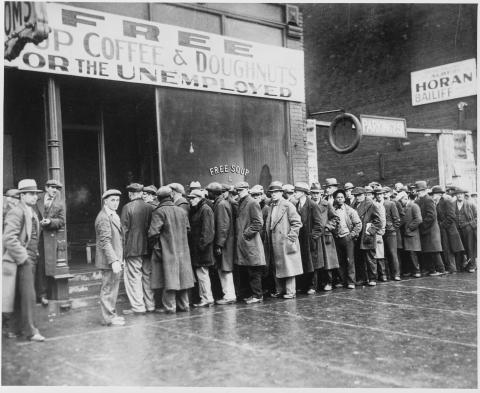 The ILO reports that unemployment worldwide hit a record high last year of 185.9 million people worldwide, or 6.2 percent of the global labor force.

The political class claims to have the answer, but unemployment is not the result of any one cause. It makes its appearance in a great variety of circumstances, some in personal factors, some in economic changes, and some in legislative and regulatory conditions. Throughout the year some workers may appear in the labor market and then withdraw. Students work during the summer and return to school in September. Building and construction activities, logging and lumbering, slaughtering and meat packing are very seasonal and give rise to a considerable amount of temporary unemployment. Similarly, industrial and technological changes may force workers to readjust and relocate. Jobs, wages, and working conditions always point the way.

The Bureau of Labor Statistics of the United States Department of Labor keeps careful watch of unemployment and diligently counts the numbers. But in its long history the Bureau has never prepared a systematic collection, organization, and analysis of the unemployment created by labor laws and regulations. Yet this kind of unemployment is more important by far than seasonality or industrial and technological change to which labor markets readily adjust. It is chronic and lamentable as it creates large armies of unemployed, impoverishes many people, breeds discontent, indignation, anger, and, worst of all, being interpreted erroneously, may turn public opinion against the enterprise order itself. In the end, it may even deliver the economy into the very hands that cause the unemployment.

Whenever government forcibly raises employment costs it causes marginal labor, that is, labor that barely covers its costs, to become submarginal. It does not matter whether government orders wage rates to rise or benefits to be improved, the workday to be shortened, overtime pay to be raised, funds to be set aside for sickness and old age, or any other benefit to be granted. A small boost renders few workers submarginal, a large boost affects many. In matters of employment they now are "unproductive" and cannot be used economically.

It is obvious to all but politicians that any worker, male or female, old or young, Yank or Chinaman, whose service is worth only $10 an hour but must be paid $20 or more cannot be employed profitably. He would inflict clear losses on anyone who would hire him, which condemns him to a life of idleness, uselessness, and emptiness. Unaware of the very cause of his affliction, he is likely to take umbrage at society that apparently sentenced him to lifelong unemployment.

American labor laws evoke such feelings every day. At this time they enforce a minimum wage of $5.15 an hour, plus 7.65% payable into a Social Security account, plus 2% to 10% into an unemployment compensation account, plus 10% to 100% for workmen's compensation which is a fund that pays an employee who is injured in the course of his work. The compensation assessments vary from state to state, but the levies together readily double the employment costs in many occupations.

The Bureau calculates total fringe costs of $5.80 an hour for service workers and $8.73 an hour for construction workers. Skilled and trained workers surely are able to cover their fringe costs by way of takehome-pay adjustment; instead of earning $18.73 an hour they receive only $10. But how can an unskilled service worker who is to earn $5.15 an hour to cover additional fringe costs of $5.80 an hour? He obviously must render services worth at least $10.95 an hour to cover his employment costs. Anyone unable to render $10.95-services cannot be employed productively.

Competition forces many employers to grant additional fringe benefits such as paid vacations, sick days, holidays, health and life insurance, pensions, and other gratuities. Employers may even boast of the benefits which nevertheless are covered by employee productivity, just like the legally required benefits. Highly productive workers may soon cover them, but unskilled minimum-wage workers who expect the same company benefits obviously would be unable to earn them. If there is no demand for their services at $10.95 an hour there will be none at any higher rate.

Chronic unemployment is obviously a political disease that springs from the primitive notion that government can improve everyone's income and working conditions by legislation and regulation. It is an affliction that stems from misinterpretation and misinformation about work and income and from an undaunted faith in collective force and coercion. It clearly reflects the spirit and mentality of our age. Unless they soon give way to the spirit of individual freedom and enterprise the rate of unemployment is likely to rise. It may even reach the levels of the old European welfare states, such as France, Germany, and Italy, where unemployment rates usually exceed 10 percent.

There is no ready escape from the consequences of such labor laws. Surely, most young workers are willing and ready to accept employment at honest market rates; they are even prepared to ignore the labor laws and work under market conditions. But most employers do not dare to violate the laws. The penalties leveled at them always are onerous and degrading no matter what their motives may be. Nevertheless economists estimate that some 30 percent of unskilled youths find ready employment in the "underground economy" where wages are paid according to productivity. Many small family enterprises employ and train millions of young people.

In the coming years the rate of unemployment probably will rise as Congress raises the minimum wage, boosts Social Security taxes, and increases the benefits, that is, the costs of labor. But times change; we may learn anew that labor laws that ignore basic economic principles and build on brute force have hurtful consequences.