GET NEWS AND ARTICLES IN YOUR INBOXPrint
A
A
Home | Mises Library | Pascal Salin: Gentleman, Economist, Radical 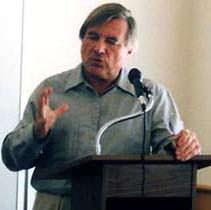 One of the great Austrian economists of our time is about to retire from the University of Paris, after thirty-eight years of service.

Pascal Salin is the author of eleven books, dozens of scholarly papers, and hundreds of articles in which he explains and develops economic science and courageously advocates individual liberty. He is the academic teacher of Bertrand Lemennicier, Georges Lane, Frédéric Sautet, Cécile Philippe, Véronique de Rugy, Philippe Lacoude, François Guillaumat, and many other vigorous and original champions of a free society.

Throughout his career, he has earned great distinctions and gained enthusiastic followers, not least of all because his patent intellectual prowess combines with the elegant civility of a gentleman of the old French school. On the occasion of his approaching retirement, colleagues, friends, former students, and admirers from all over the world have just published a festschrift in his honor. Among the contributors are Hans-Hermann Hoppe, Jesus Huerta de Soto, Anthony de Jasay, Gary Becker, Raymond Boudon, and Lord Harris of High Cross, to name just some of the more prominent ones.

Among Austrians in the United States, Professor Salin is well known for his articles on the Myth of the Income Effect, on Cartels as Efficient Productive Structures, on the Firm in a Free Society, and for his Defense of Fractional-Reserve Banking on moral grounds. He was also interviewed in 1996 in the Austrian Economics Newsletter and again a few years later, upon the publication of his magnificent 500-page essay on Liberalism.

Yet all in all, his output in English is negligible in comparison to the mass and quality of his writings in his native language. Here he displays all the virtues of an author who truly masters his langue and excels in nuanced and elegant presentation. Pascal Salin hits the right points and the right tone. In France, this has won him a large readership and the respect of his opponents.

Born in Paris in 1939 into a family with roots in Southwestern France, Pascal Salin studied economics at the University of Paris and then made a brilliant academic career, becoming a full professor at the age of 27. He first served in Poitiers and Nantes before being nominated in 1969 to the University of Paris-Dauphine. Early on, he was a visiting economist with the IMF, the OECD, and other international organizations.

In the 1970s, among other functions, he was the host for various national radio and TV shows, as well as a consultant for the Harvard Institute for International Development. In the 1980s and '90s, he was repeatedly a consultant to the French government and a vice-president and president of the Mont Pèlerin Society. He became the laureate of high decorations and honors, and is presently a Knight of the Légion d'Honneur and an Officer of the Ordre national du Mérite.

More important than his career, though, are his intellectual achievements and especially the moral qualities that turned him into a source of inspiration for students and readers in France and abroad. In the early 1960s, when he received his training at the University of Paris, two schools of thought reigned supreme: Keynesianism and Marxism. Unsatisfied with this meager diet, Salin and his student friends started to look elsewhere and discovered the writings of Milton Friedman and Robert Mundell. Here was the quantity theory of money, the permanent income hypothesis, and the monetary approach to the balance of payments.

No French economist had ever refuted these doctrines. Nobody knew them in the first place. The only place where these theories were discussed was a student seminar: the J.-B. Say Seminar that Salin and his friends Daniel Pilisi, Alain Wolfelsperger, and Emil-Maria Claassen had created in the fall of 1961 at the University of Paris. Still in their doctoral studies, they brought monetarism to France. When they rose to the ranks of professors, the attention was on them. Career doors flung wide open and for some fifteen years they shaped the economic debate in France.

This is what career-oriented economists aspire to achieve: create a debate, create a movement, and ride the wave to ever-higher distinctions. But Pascal Salin moved on.

In the late 1970s he returned from a trip to the United States and told his friends: "Finally I have understood what economics is all about." He had discovered Austrian economics. He had just met the author of a book calling for the Denationalization of Money. Through his discussions with F.A. Hayek, he had come to understand how encompassing economic analysis can be, and how precious as an intellectual foundation of a free society.

He now began to study the theory of subjective value as well as the praxeological method of analysis. He began to read Mises and Rothbard and other Austrians. He began to understand that these contemporary authors had modernized and radicalized the approach of Say, Bastiat, and other 19th-century French économistes. And as his predecessors, he now did not shy back from endorsing the radical political conclusions that followed from the logic of human action.

During the next few years, Salin would digest this new literature and develop it into various directions. He would publish a book-length essay on money and another, prize-winning book on public finance. Here he exposed the science of taxation for what it is: rhetorical cover for robbery. According to its intellectual champions, taxation can be a tool for social engineering — the remaking of society according to some political scheme. But Salin showed that the incidence of taxation cannot be determined in advance because the citizens do not react mechanically to it. Depending on how they choose to react, taxation may have consequences diametrically opposed to those that the planners hoped for. Social engineering through public expenditure is therefore nothing but fiscal tyranny.

Salin would also write Austrian textbooks on competition, free trade, and macroeconomics. The latter is one of his finest achievements. It contains one of the most devastating critiques of Keynesianism in print and a subtle analysis of the role of resources withheld from the market (which in the Keynesian literature are often misnamed "idle" resources). Salin also shows himself to be immune against the sometimes hysterical deflation-phobia raging among mainstream macroeconomists. In his eyes, changes in the price level do not matter much from an overall point of view, and he stresses that deflation is certainly beneficial for the owners of cash balances.

In the year 2000, then, he published a treatise on Liberalism — the first comprehensive restatement of libertarian doctrine by a major European academic since Ludwig von Mises's Liberalism in the 1920s. Here he delivered among other things a sweeping critique of the notion that democracy, not private property, is the distinguishing mark of a free society. He rebuts the fantastic claims of those who justify government interventionism with the perceived, or imagined, need to protect the environment. He stresses that the rules that are necessary for a free society to function can be produced competitively. In fact, he leaves no positive role whatsoever for coercive government, which he opposes both on principle and out of utilitarian considerations.

Through these works and through his personal impact in the classroom, in public lectures, in the press, and on TV, Pascal Salin almost single-handedly brought Austrian economics to France. Yet his attempt to make praxeology respectable in a largely hostile intellectual environment entailed mixed results. He did win the respect of businessmen, politicians, and social leaders. He even won the respect of scholars from other fields. In the economics profession, however, he was met with bewilderment.

His political opinions had always been unpalatable to his colleagues. Even before he encountered Hayek and the Austrians, he had the reputation of an extreme libertarian (which is not exceedingly difficult to obtain in France, the only major country in which academic economists tend to be more statist than the rest of the population).

But his Austrian turn estranged him from erstwhile monetarist comrades-in-arms and made him fair game for his enemies. Thus one junior professor from his university recently admitted in public that many of his colleagues conspired to keep him away from the students. And when the government in 2003 appointed him chairman of a national committee to hire new full professors, two colleagues from a suburban university started an unprecedented smear campaign against him and his committee — and won the endorsement of the major union-controlled professional association.

No doubt Pascal Salin will not let himself be distracted by such miserable maneuvering. He will move on, as ever, and for quite a while: his mother just celebrated her 100th birthday, and Pascal is already making plans to surpass her. Thus we look forward to at least another 32 years of progress in Austrian economics with a distinct French flavor. Courage, Pascal!