Out of Work | Mises Institute
Skip to main content 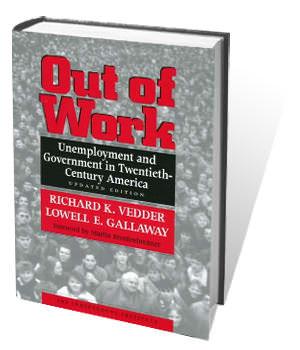 Not many Americans have heard of Richard Vedder and Lowell Gallaway, but maybe more should. They are the authors of Out of Work, the best economic history of 20th-century America and an indictment of all the monstrous and stupid things our government has done to us.

In addition to holding legitimate jobs as professors of economics at Ohio University, Vedder and Galloway work among the enemy as staff members to the Joint Economic Committee of Congress. Their publications at the JEC demonstrate the common sense of economics and the sensibility that only a familiarity with Austrian economics can bring to the study of economic history and public policy.

Unfortunately for all, their work seems to be ignored by both species of Congress. Here is a sampling of their findings, estimates, and conclusions:

It's too bad that Congress won't listen to its own economists. Vedder and Galloway aren't calling for the immediate overthrow of all government; they are arguing that just small reforms like small tax cuts and marginal spending cuts could make a real difference in the economic lives of Americans. The fact that Congress hasn't acted on economic reform is a sure sign of where their priorities lie.

While somewhat heavy on statistical analysis, all of these reports are available at the Joint Economic Committee website. It might be worth downloading copies the next time you feel like sending an ideological letter bomb to your Congressmen or newspaper editor.

This Mises Daily was originally published October 2, 1998, as "Economic Sense." Read an interview with Richard Vedder in the Austrian Economics Newsletter.