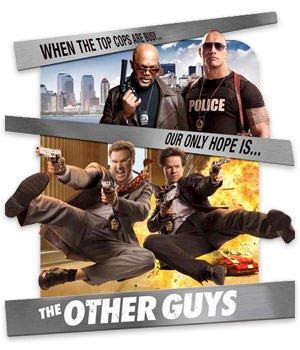 A few nights ago, my girlfriend and I watched The Other Guys, starring Will Ferrell and Mark Wahlberg. The movie is a buddy-cop comedy in which the plot revolves around Ferrell and Wahlberg as mismatched New York City police detectives stumbling upon a scheme by Wall Street investor David Ershon to steal billions from the police's pension fund to cover an enormous loss he incurred for a major corporation.

While The Other Guys proceeds as a typical film, in which the underdogs prove themselves and become heroes by the end, there is an unexpected theme present through much of the film: the incredibly close relationship Wall Street has with federal-government regulators. While I am normally hesitant toward any comedy starring the likes of Will Ferrell, The Other Guys ends up being a brilliant demonstration of the kind of corruption inherent to our present financial markets.

Near the beginning, it is revealed that Ershon has lost $32 billion of Lendl Global's $70 billion equity fund due to faulty investing. CEO of Lendl Corp., Pamela Boardman, in an understandable rage, orders a number of "thugs" to stay with Ershon until he makes up for the loss. When Ershon makes an attempt to escape their supervision, Ferrell and Wahlberg's characters end up arresting him on numerous "scaffolding-permit violations," demonstrating the kind of wasteful spending and asinine regulations New Yorkers are forced to pay their police to uphold.

Once Ershon is in Ferrell's and Wahlberg's custody, the security team put in charge of keeping track of Ershon ends up deliberartely crashing their vehicles into Ferrell's and then kidnapping Ershon back. At this point, Ferrell and Wahlberg suspect something is amiss and decide to pursue the case further, much to the dismay of their own police captain.

As the movie proceeds, it becomes obvious that Ershon is not the world-class investor he appears to be. Besides his troubles with Lendl, Ershon also ends up owing money to Nigerian and Chechen businessmen. Thus, the need arises to acquire a large sum of money, which is why the New York City police pension fund is targeted.

Obviously, the theft of a government pension would be very hard to pull off, but throughout the movie we discover that Ershon has numerous political connections. From a picture of him with former president George W. Bush to a report of him spending a large amount of time with Supreme Court Justice Antonin Scalia, Ershon is a perfect example of Wall Street's intimate connection to Washington, DC. The real kicker comes when we find out that Ershon's own attorney, Don Beaman, heads the New York Securities and Exchange Commission (SEC).

While Ferrell and Wahlberg's captain forces them to turn over their evidence on Ershon, Beaman admits that although he plays squash and hangs out at the same club as Ershon, a conflict of interest will not arise. Eventually, the police captain admits that Ershon "is connected to all the higher ups," including the District Attorney — hence the captain's desire to kill the case.

While it is doubtful that the writers of The Other Guys, Adam McKay and Chris Henchy, meant to use the movie to display the kind of underhanded affairs big business has with the government, it is certainly a subject interwoven throughout the film. Even within the past month, there have been numerous announcements of individuals leaving their high-profile positions within the government to take up employment within the financial sector, and vice versa. From President Obama's former budget director, Peter Orszag, joining[1] Citigroup to Theo Lubke, a former regulator for the New York Branch of the Federal Reserve (which Mark Wahlberg's character humorously mistakes for a prison) getting hired,[2] top government regulators have made it a habit to use their positions as a springboard to the highly profitable financial sector.

It has just been confirmed[3] that Bill Daley, an executive at JP Morgan and member of the Chicago political powerhouse, is to become Obama's new chief of staff while Joe Biden's current chief of staff, Ron Klain, has announced[4] he will step down at the end of January to join the major investment firm Case Holdings. Even Gene Sperling, who has just been announced as a replacement[5] for Larry Summers as the head of the National Economic Council, is reported to have earned about $900,000 from Goldman Sachs in 2008 as well as $158,000 from various financial institutions for speeches he gave. So continues what Robert Wenzel brilliantly describes as the "incestual relationship"[6] between Wall Street and Washington, DC.

With such a revolving door, it should come as no surprise that as the new Frank-Dodd financial-regulation bill begins to take effect, many of the institutions blamed for causing "The Great Recession" have begun[7] to take advantage of loopholes within the bill. So while Washington politicians, Democrat and Republican alike, continue the facade of bashing Wall Street and trying to regulate its excesses, they in turn remain ever ready to support it behind the scenes. All the while the big banks cash in[8] by utilizing various lobbyist firms.

But this should come as no surprise; governments granting special privileges to businesses in this country dates back to at least 1798, when the New York legislature granted Robert Livingston a monopoly on operating steamboats all over the state, including the Hudson River and New York Harbor. This legislative monopoly of course led to the infamous Supreme Court case Gibbons v. Ogden, 22 US 1 (1824), which forever enshrined the federal government's ability to regulate commerce.[9]

While I have never been a huge fan of Will Ferrell, The Other Guys remains a highly entertaining movie filled with witty dialogue and over-the-top action. At the same time, the aspect of big business and government regulators in cahoots with each other dominates as a constant theme. The movie even ends with the government issuing TARP funds to cover Lendl Corporation's losses because they are considered "too big to fail" and Derek Jeter himself warning about the billions of dollars spent on lobbying by corporations that "own" the government. A good message no doubt, but unfortunately the prospect of ending the corporate-welfare state and returning to a true free market in this country goes unmentioned.

For a comedy movie, The Other Guys is a shining example of the kind of problems that plague our current financial system. By far the funniest and most insightful part of the movie arises in the dialogue between Ferrell's character and the SEC lawyer, Beaman. Ferrell, in regards to handing over his evidence to the SEC, states "I hear you guys are the best at these types of investigations — outside of Enron, AIG, and Bernie Madoff, WorldCom, Bear Stearns, Lehman Brothers … " before Beaman cuts him off.

I hope that even if the movie's audience fails to catch on to the tight relationship between government officials and Wall Street, at least that line will diminish their respect for the SEC's pathetic efforts at stopping fraud. That quote alone is worth the price of admission, or at least the $1 rental fee at RedBox.