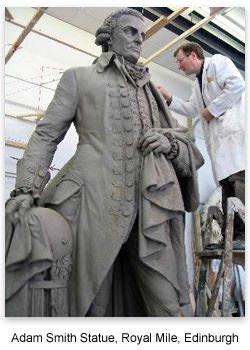 [Excerpted from an edited transcript of "Ideology and Theories of History," the first in a series of six lectures, given in 1986, on the history of economic thought.]

The orthodox historiography of economic thought starts as follows: There were a bunch of mercantilists running around, talking about specific things like sugar. Should the government keep bullion in the realm? Should we have tariffs?

And then in 1776, emerging like Athena out of the brow of Zeus, is Adam Smith, who, out of his head, creates all modern economics, free-market economics, the whole business, and that's it. Then you have Ricardo and you have Marx and whoever, somehow deriving from Smith. Then you have Austrians, Marshall, and Keynes, and that's about it. Anyway, Smith becomes the originator, even to the extent that some of your beloved people here in Washington wear Adam Smith ties as a tribute to the founder of laissez-faire economics.

This is pure baloney from start to finish, this myth. Emil Kauder is one of the first people to say so, in his two articles. The Kauder paradigm I think is the correct one. Schumpeter wrote a year or two after Kauder in the famous book that really sets this same thing forth: The History of Economic Analysis. Unfortunately, Schumpeter did not live to complete it, so it's badly written and even more badly organized. In many ways, it's almost incomprehensible.

Schumpeter is definitely a revisionist in this sense: He believes that life existed before Adam Smith, economics existed before Adam Smith — not only existed, but was better. In other words, what you have is many hundreds of years of sound economic analysis: Scholastics from Aquinas in the Middle Ages down through the Spanish Scholastics in the late 16th century. And then a French tradition developed in the 18th century and continued in France and Italy, leading to a fantastic flowering of modern economic thought — Cantillon and Turgot in particular.

And you have everything there. You have laissez-faire much more pure and much more sound than Adam Smith. In fact, Turgot, if any of you read my old pamphlet on it, is really pre-Austrian in every sense.1 He's got time preference in there, he's got the Böhm-Bawerkian theory of capital, the whole business; it's fantastic. He's got the laws of diminishing returns. He's got the whole schmear.

You have this great flowering of economic thought and laissez-faire thought going hand-in-hand. And then, bingo, there's a collapse with Smith.

Schumpeter is properly assiduous about Smith. He obviously had total contempt for Smith, and for good reason. And he hates Ricardo — that's another great thing about Schumpeter. His hatred of Ricardo shines through the book, it's almost a major feature of the book. It pops up every 50, 100 pages. Oddly, he likes John Stuart Mill for some obscure reason that I can't figure out; Mill is only bringing back Ricardo.

So at any rate, you can't look for much consistency in Schumpeter. But the fundamental paradigm is consistent. It was a big blow — orthodox economists and historians of thought were shattered by the Schumpeter book. If we go back and read Frank Knight's review of it, for example, we see that he couldn't understand. "Why is he pro-Catholic?" Of course, Knight was a hysterical anti-Christian. He really went ape on the Christian question — Protestant and Catholic, but particularly Catholic. So he's not exactly equipped to be very objective about this when it came out.

What Knight used to do, when he taught his course in graduate economics, if there were any nuns or priests in the class, he'd just insult the Catholic Church until they left, then he'd say, "Now we can begin." He was a weird duck.

So I commend Kauder. It's a marvelous statement in Kauder, what he says about Smith and making "waste and rubbish" of 2,000 years of economic thought.2 I'll get into that. Anyway, the Kauder thesis of Scholastic economics basically is that the Scholastics emphasize utility and scarcity as the key determinants of value in production or whatever.

By the way, the neoclassical smear against the Austrians is they're only interested in utility (or demand) and not supply, which of course is rubbish. The whole point is this: in the familiar two-dimensional diagram, you have quantity of a good on the X axis and then you have utility or whatever on the Y axis in some way — it's ordinal, not cardinal — being very broad about it. Simply, what we Austrians are saying is that the diminishing utility of a good, and the intersection of the demand curve with the supply will bring you the economic value of the price of the product.

So it's not that supply is unimportant. What they're really saying is you have subjective demand, which then impresses itself on the economic system and values everything. All the stuff that's there is being evaluated by people. So you have people doing the evaluating of the things that are supplied.

So it's important to have supply as a vertical curve, not to confuse the situation. The Austrians, of course, and the Scholastics deny the role of so-called cost in determining price. That was the point. Cost only affects price by helping to determine scarcity. That gets back to the supply of a product.

And as Kauder points out and as Schumpeter points out, and later on, de Roover and Grice-Hutchinson — a whole bunch of other revisionists on the Scholastic front — the entire view that economists had of Scholastics for a couple hundred years is totally all wet. And the basic view, as I'm sure you've read, is that Scholastics believed in a "just price," and that the just price was the cost of production plus a guaranteed profit, and/or keeping your station in life, whatever your station is. If your station is humble, then you keep being humble. This is totally all wet, as all these guys have shown. De Roover and all these people have shown in detail that very few Scholastics have this doctrine — two or three — and these were minor fringe people.

The mainstream of Scholastic thought was utility, scarcity, and free market. In other words, the just price was the market price. It's true they weren't total libertarians, I'm not going to say that. They didn't like the idea of individual bargaining. They thought the market had to be a market: so if you and I agree on some price and it's not the market price, they would say it's unjust.

Second of all, they were not against price control. They thought that price control could also be just. That's very far from saying that something else has to replace the market. In other words, they were promarket people, and very keen market analysts.

The only thing I want to say about a Scholastic personally is about one of the best them, a magnificent character, Pierre de Jean Olivi. He wrote around 1400. He was not only a great market analyst and the inventor of sophisticated utility theory, even down to marginal-utility theory; he was also an extreme spiritual Franciscan, a rigorous Franciscan, in other words, an extreme propoverty person.

The Franciscan movement started out as propoverty, with a pledge of poverty. Then as the Franciscan church began to accumulate money from donations or whatever, they began to have second thoughts, and began to be more realistic about the whole thing. The rigorous wing of Franciscans were upset: "You guys are selling out the Franciscan doctrine, the Franciscan heritage."

Olivi was the leader of the Provençal group of extreme propoverty people. He was emaciated. Obviously, he's a Franciscan — even ordinary Franciscans didn't eat much, no less the rigorous Franciscans. He was very poverty stricken, sort of like a movie character — very skinny, wandering around. And he was a great, sophisticated market analyst. It's amazing. It's one of the great anomalies in the history of thought.

The only thing that Scholastics were weak on was the usury question. This is the thing that really discredited them eventually. They had a real problem with time preference. Nobody until Turgot really understood it. You can't blame them too much. They couldn't understand why you should charge interest on a riskless loan. They understood about profit, they understood about opportunity cost. They got the whole thing down. Just time preference was their major weakness.

The other of Emil Kauder's theses is that it's no accident that it was only among Calvinists that the labor theory of value flourished. When I first read this, it was very interesting but speculative, but I now think there's a lot to it. In the history of thought you have several hundred years of consumption theorists and utility theorists. And then all of a sudden the labor theory pops up.

Calvinists believe in a divine obligation for labor. In other words, they believe almost that labor is an end in itself. Catholic thinkers tend to be in favor of consumption, moderate enjoyment, and labor as a means to an end, which is more of the economic way of looking at it, so to speak. But the Calvinists tend to be antienjoyment, and want to keep consumption limited to a minimum, merely to fuel your continuing labor. I'm not saying every Calvinist is like this, or every Catholic, but as a broad summary, I think it's pretty accurate.

If you look, for example, in Scotland, we have Catholics and Calvinists living side by side. The Catholics are always attacking the Calvinists for being dour, standoffish, unfriendly, etc., and the Calvinists are attacking Catholics as being lazy, shiftless, and drinking a lot. They're probably both right. But that's the sort of difference you get, and this seems to hold through throughout. Catholics tend to be much more relaxed.

As we'll see, the first real labor-theory-of-value person was really Adam Smith. I deny that it was John Locke. I think Locke had a labor theory of property, which is very different from a labor theory of value. It simply means, how do you get unowned resources into private ownership? What's the way to do it? Locke was, of course, a homesteading theorist. By mixing your labor with the soil, it then becomes your private property. I don't think that's the labor theory of value at all. I think it's a total misconception. Historians of course get the whole thing mixed up.