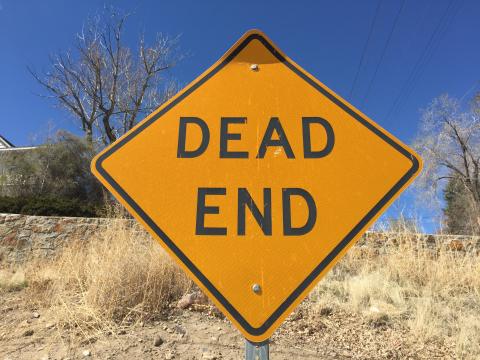 Economic policymakers around the world are running out of tools to boost the flagging global economy, said the World Bank in a report last week. The bank said the U.S. Federal Reserve, the world's most influential central bank, has little room left to cut interest rates. In fact, the bank concluded that policies this year and next are more likely to be less stimulative or "restrictive" than expansive.

Most experts are in agreement on this and have expressed concern that at the current Fed Funds rate of 1.25% the Fed is running out of "ammunition." After all, it is held that once the nominal interest rate falls to zero no further reduction in the rate is possible since lenders will not accept a negative nominal interest rate when it is possible instead to hold cash.

In other words, the Fed cannot use interest rates as a means to stimulate the economy—hence why it is "out of ammunition." Moreover, if falling economic activity persists, it is believed that there is the possibility of the emergence of deflation, i.e., a general decline in prices. Once prices start falling it is held that this can set in motion very dangerous dynamics, which can lead to a severe economic slump.

Moreover, deepening deflation will weaken borrowers' abilities to serve and repay their debts. The reason being that because of falling prices borrowers must repay the principal in dollars of increased real value. This in turn puts strains on the banking system on account of increases in the percentage of loans that are delinquent or in default. Consequently this slows down banks' lending, which in turn weakens the economy further.

Against the possibility of such a scenario various Fed officials in their speeches have assured the public that there is no need to worry. The reason for this is because the U.S. central bank has in its arsenal many other tools besides the federal funds rate that can be employed to revive the economy.

For instance, once the short-term interest rate is lowered to zero some Fed officials have suggested that the Fed could revive the economy by lowering long-term rates through buying T-Bonds. In short, it is held that by lowering long-term rates the central bank would be able to counter the tendency for rises in real interest rates, thereby helping to stimulate the economy and preventing it from falling into a deflationary black hole.

Also, some Fed officials and other experts are of the view that the best way of avoiding the horror scenario of deflation is for the Fed to generate a buffer inflationary zone. What they mean by that is that the central bank must avoid policies that aim at zero inflation. Instead the Fed should strive to maintain inflation at a positive number.

Thus, if for some reason aggregate demand unexpectedly falls, the buffer zone would provide the necessary protection against the economy falling into a deflationary black hole. The biggest problem with this way of thinking is that once implemented it would only make things much worse.

The Threat is Inflation, Not Deflation

As long as the pool of real funding (that is investable capital) is growing overall economic growth will be expanding and this in turn will keep commercial bank lending on the path of a positive growth rate. (The existing stock of real savings and the production flow of final consumer goods determine the size of the pool of real funding).

It must be realized that only credit that is not backed up by proper savings can disappear into thin air and thereby cause a shrinkage in the stock of money. In other words only credit created through fractional reserve banking can shrink. Money, which is fully backed up by savings, once repaid by the borrower to the bank, is passed back to the original lender and therefore cannot disappear unless the original lender decides to physically destroy it.

We can thus conclude that while inflation is defined as increases in the money supply, i.e. the generation of money out of "thin air," deflation is defined as the evaporation of this type of money. Moreover, it is inflation that is instrumental in the depletion of the pool of real funding, which ultimately sets in motion deflation. It is for this reason that deflation cannot emerge without prior inflation, i.e., deflation does not have a "life of its own".

Despite the almost unanimous agreement that deflation is bad news for the economy's health, this is not the case. As we have seen deflation comes in response to previous inflation. This amounts to the disappearance of money that was previously generated out "of thin air." This type of money gives rise to various nonproductive activities by diverting real funding from productive real wealth generating activities.

Obviously then, a fall in the money stock on account of the disappearance of money out "of thin air" is great news for all wealth generating activities since the disappearance of this type of money arrests their bleeding. In short, since a fall in the money stock undermines various nonproductive activities it slows down the decline of the pool of real funding and thereby lays the foundation for an economic revival.

Similarly, it is not increases in real interest rates but a shrinking pool of real funding that undermines real economic growth. On the contrary, increases in real interest rates put things in proper perspective and arrest the wastage of scarce real funding and thereby help the real economy. Also, it is not a fall in prices that undermines debtors’ ability to serve and repay their debt, thus putting a strain on the banking system, but a decline in the production of real wealth. Obviously with less real wealth being produced less debt can be repaid.

It seems therefore that what undermines the real economy is not deflation but inflation, which sets in motion consumption without a preceding production of real wealth. Therefore setting a ‘buffer inflation zone’ to prevent an economic slump as is suggested by some experts amounts to a deliberate policy of weakening the pool of real funding and thus pushing the economy into an economic slump. The only buffer that is required to prevent deflation is to not inflate. This means that all the sources of creation of money out of "thin air" must be completely sealed off.

Contrary to popular thinking the Fed doesn't have any tools that can promote economic growth. The US central bank never had the ammunition to keep the economy going. The myth that the central bank can grow the economy by means of various tools in its possession is only maintained as long as the pool of real funding is growing. However, this myth is shattered once the pool starts to decline (an excellent example in this regard is Japan in the 1990's and the US during the 1930's). For if the Fed and other central banks would have had the tools to grow the economy the worldwide poverty would have been eliminated a long time ago.

Against the background of the fact that the Federal Funds rate is fast approaching the zero level, various experts have expressed a concern that the U.S. central bank may run out of "ammunition." In response to this they offer various schemes aimed at supplementing this major tool of the Fed. Cursory observation however, shows that all the suggested schemes amount to various ways of increasing the pace of monetary pumping. Contrary to the experts' beliefs, these schemes will only lead to a further depletion of the pool of real funding and in turn will only make things much worse.