A Note On Mathematical Economics 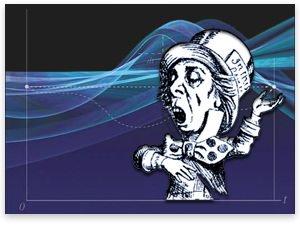 "Human action, unlike the movement of stones, is motivated."

The mathematical method, like so many other fallacies, has entered and dominated present-day economic thought because of the pervading epistemology of positivism. Positivism is essentially an interpretation of the methodology of physics ballooned into a general theory of knowledge for all fields.

The reasoning runs like this: Physics is the only really successful science. The "social sciences" are backward because they cannot measure, predict exactly, etc. Therefore, they must adopt the method of physics in order to become successful. And one of the keystones of physics, of course, is the use of mathematics.

The positivists tend to separate the world into the truths of physics on the one hand and "poetry" on the other; hence their use of mathematics and their scorn for verbal economics as being "literary."

As Professor Mises has pointed out, there is a crucial distinction between the natural world studied by physics and the world of human action.

In physics, the facts of nature are given to us. They may be broken down into their simple elements in the laboratory and their movements observed. On the other hand, we do not know the laws explaining the movements of physical particles; they are unmotivated.

We must therefore seek causes by hypothecating general theories, and from these axioms be able to deduce not only the original facts, but other theories which can be directly tested by fact (the famous concept of "operational meaning"). As much as we may progress in the knowledge of the laws of physics, our knowledge is never absolute, since the laws may always be revised by more general laws and through further empirical testing

In economics, however, the conditions are almost reversed. Here we know the cause, for human action, unlike the movement of stones, is motivated. Therefore, we may build economics on the basis of axioms — such as the existence of human action and the logical implications of action — which are originally known as true.

From these axioms we can deduce step by step, therefore, laws which are also known as true. And this knowledge is absolute rather than relative precisely because the original axioms are already known. On the other hand, there are no simple elements of "facts" in human action; the events of history are complex phenomena, which cannot "test" anything. They themselves can only be explained by applying many relevant theories to different aspects of the complex "fact."

Why is mathematics so useful in physics? Precisely because the axioms themselves, and the laws deduced from them, are unknown and in fact meaningless. Their meaning is only "operational," since they are meaningful only insofar as they can explain given facts.

Thus, the equation of the law of gravitation is in itself meaningless; it is only meaningful to us in relation to the facts that we humans observe and that the law can explain. Consequently, mathematics, which performs deductive operations on meaningless symbols, is perfectly suited for the methods of physics.

Economics, on the other hand, starts from an axiom that is known and meaningful to us — human action. Since the action is itself meaningful, all the laws which are deduced step by step from it are also meaningful. This is the answer to those critics (such as Mr. Schuller, American Economics Review [March, 1951], p. 188) who called on Professor Mises to use the methods of mathematical logic instead of verbal logic. For mathematical logic must deal with meaningless symbols; hence its use would strip economics of all its meaning.

On the other hand, verbal logic permits each law to be meaningful as it is deduced. The laws of economics are already known to be meaningfully true; they do not have to borrow their meaning from "operational" testing. The most that mathematics could possibly do, therefore, is to laboriously translate verbal symbols into meaningless formal symbols and then, at each step, retranslate them into words.

Because of the barrenness of the mathematical symbols, such a course would be likely to lead to grave errors. However, if anyone is hardy enough to embark on the venture, we may only wish him well. And yet, such translation and retranslation would have to fall with one slash of Occam's Razor — the famous scientific principle that there be no unnecessary multiplication of entities, i.e., that science be as simple as possible.1

Since knowledge in physics is never certain and absolute, positivists can never understand how economists can arrive at certain truths; therefore they accuse economists of being "a priori" and "dogmatic." Similarly, cause in physics tends to be fragile, and positivists have tended to replace the concept of cause by one of "mutual determination." Mathematical equations are uniquely suited to depicting a state of mutual determination of factors, rather than singly determined cause and effect relations. Hence, again, mathematics are singularly suitable for physics.

I have grave philosophic doubts as to whether the concept of cause can really be expunged from physics. But whether or not it can, it certainly cannot be from economics. For in economics, the cause is known from the beginning — human action using means directed towards ends. From this we can deduce singly determined effects, not mutually determined equations. This is another reason that mathematics is uniquely unsuited to economics.

Positivist economists have therefore sneered at praxeologic economists as being interesting, but hopelessly untrained in mathematics. Thus, Frank Knight says about Carl Menger:

He does offer the lame observation (taken seriously by some disciples) that the value of a good, determined by marginal utility (as we should say), sets the amount that may be expended in producing it — a far cry from recognition of the true relations of mutual determination between these variables. (Frank Knight, "Introduction," in Carl Menger, Principles of Economics [Glencoe, 1950], p. 23.)

George Stigler writes of Böhm-Bawerk's failure to understand the "concepts of mutual determination and equilibrium (developed by use of the theory of simultaneous equations.) Mutual determination (gegenseitige Interdependenz) is spurned for the older concept of cause and effect." And Stigler adds the explanatory footnote, "Böhm-Bawerk was not trained in mathematics,"2 for which we may all offer a silent prayer of thanks.

And finally the virtual kingpin of current economists — Paul Samuelson — backs up Alan Sweeny's criticism of Mises and Stigler's approach to utility and action theory as being "tautologous" ( a favorite positivist concept) — and also casually dismisses Mises's regression theorem as being unimportant, since it rests on typical "fears of literary writers" about circular reasoning. We need not worry about circular reasoning in cause and effect terms, because Walras and his successors developed the "idea of general equilibrium in which all magnitudes are simultaneously determined by efficacious interdependent relations."3

I have tried in this paper to consider mathematical economics only in its best possible light. Actually, mathematical methods necessarily introduce many errors and inanities which cannot be developed here.

The use of the calculus, for example, that has been endemic in mathematical economics assumes infinitely small steps. Infinitely small steps may be fine in physics where particles travel along a certain path; but they are completely inappropriate in a science of human action, where individuals only consider matter precisely when it becomes large enough to be visible and important. Human action takes place in discrete steps, not in infinitely small ones.

The best readers' guide to the jungle of mathematical economics is to ignore the fancy welter of equations and look for the assumptions underneath. Invariably they are few in number, simple, and wrong. They are wrong precisely because mathematical economists are positivists, who do not know that economics rests on true axioms.

The mathematical economists are therefore framing assumptions which are admittedly false or partly false, but which they hope can serve as useful approximations, as they would in physics. The important thing is not to be intimidated by the mathematical trappings.

Murray N. Rothbard, "A Note on Mathematical Economics." A report given by Rothbard in Mises's NYU seminar in the early 1950s (maybe June 1952). A copy can be found in the Bettina Greaves Papers, a collection of the Mises Archives at the Mises Institute, Auburn, Alabama. Previously unpublished. Posted online, September 1, 2009.