The New Deal in One Lesson 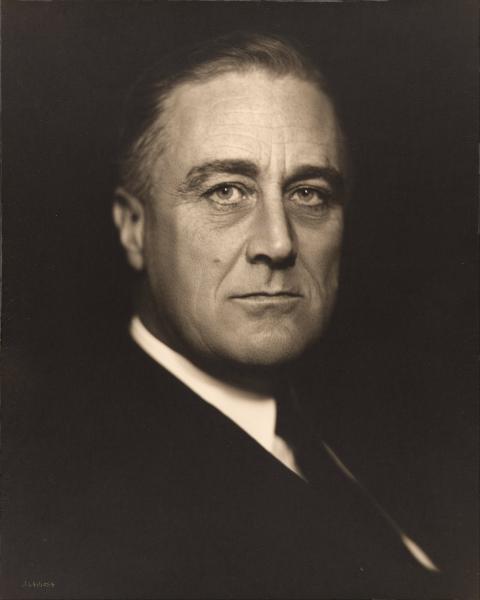 I was asking Jackson, a man whom I know primarily from our conversations each Sunday after Mass, outside of the rural parish in Piedmont. I don't know his last name (or maybe that is his last name). I do know this: Jackson is a retired Delta Airlines mechanic living out his last years in northeastern Alabama, an octogenarian, and always ready for a cigarette and conversation. He must be a chain smoker, because he is never seen outside of Mass without a cigarette either lit or in the process of being lit. When the priest says, "Go in peace," Jackson hears code for "Find your lighter."

"Popular? He was worshiped," Jackson said, following a long drag. "Man, when Roosevelt was on the radio, my daddy wouldn't let nobody talk in our house. It was like hearin' the voice of God."

"Really?" I said. "A New Yorker was worshiped down here?"

"But everyone was a Democrat back then," Jackson explained. "And Roosevelt saved the country."

He was right—sort of. Back in the Dixie of the 1930s, when a few Civil War veterans still lived (and even more who suffered through Reconstruction), most everyone was a Democrat. Notwithstanding the Wilson Administration, the party back then still stood for limited government and state's rights, as guaranteed under the Constitution. The Republicans were the party of large federal government, northern economic interests, war, and bad manners. Some of them probably still used our spoons.

So it is no surprise that the South was congenitally Democratic in those days, to the point of embracing anyone who won the party nomination. National Democrats wasted their time campaigning in the South. Better to campaign in other parts of the country, in places where you might lose.

FDR would change all that. Roosevelt was the first triangulator, the first significant politician to embrace the policies of the other party and to claim them as his own. Such strategies split the opposition and help the incumbent, and while the incumbent's rank-and-file don't like it, they usually go along. Their only risk is that they expose the truth spoken by another Alabamian, George Wallace, that there is "not a dime's worth of difference" between the two parties.

This is why FDR was lying when, in the summer of 1932, he said in his party nomination acceptance speech that "I pledge you, I pledge myself, to a new deal for the American people"—because if he wasn't, he never would have embraced Hoover's Depression-causing economic policies and expanded them throughout the 1930s. The only thing new about New Deal policies was their name and the people administering them.

He was good at it too, but when the excuses grew tired, Roosevelt dependably grew the state. Unemployment rates still high? Then pass my Social Security program to get those old-timers to give up their jobs for the younger workers. Dairy prices still falling? Then order the USDA to pour milk into sewers until prices rise again. The Supreme Court against me? Then let's add a few members. The economy in worse shape seven years into the New Deal? Then get out those war drums and let's get involved in the mess in Europe.

So Jackson was right—sort of. FDR really did save the country . . . but only if you confuse the country with the federal government.

It has proven to be a costly confusion, because many of the problems we face today have their genesis in the New Deal. Seventy years of Social Security has been destructive to the family and will add tens of trillions of dollars of debt before the baby boomers are through with it. Minimum wage laws continue to keep unskilled workers out of the labor force (and keep them unskilled). The use of crises to expand the state has now been perfected by the political class, used to end the gold standard, add levels of bureaucracy to Washington, and transform the United States into a costly military empire that fosters blowback against U.S. citizens and interests.

That many of today's conservatives extol FDR's memory while comparing him to the current president is not terribly reassuring. Are generations ignorant of economic history doomed to repeat it?

I mentioned all this to Jackson, in my best layman's terms, over the course of the next two minutes and one new cigarette. There was a long pause until he spoke. "You an economist at the university, right?"

I smiled and told him that I hoped not.