The New Confusion about Taxes 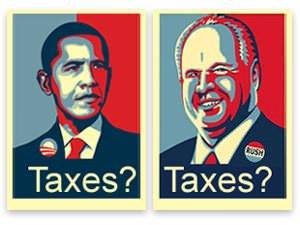 Barack Obama recently declared that if a Republican wins the next election, Americans will be "on their own." Government protection from things like pollution, hidden fees, and foreclosure will disappear, and people will not be able to rely on others to pay for things that they cannot afford.

Rush Limbaugh responded by saying "Damn right, that's what we want, to be on our own."

There is one respect in which many people are trying to be on their own. People want to avoid paying taxes. Recent discussions of tax burdens illustrate confusion over how markets work. The surge in deficit spending has spurred debate over who should bear future tax burdens. People on the political Left want tax the rich to make them pay their "fair share." According to many on the political Right, high-income Americans already pay most taxes. The top 1 percent of income earners pays as much as everybody else, and the bottom 50 percent pay no (income) taxes at all. The political Left responds by pointing out that inequality has risen. The rich are getting richer, and we supposedly need greater equality to achieve social justice.

The problem with the whole popular debate over taxes is that efforts to avoid taxes go beyond political competition over legal tax rates. Efforts to avoid taxes extend to markets. If, for example, taxes on higher incomes rose by 20 percent, high-income workers would react to this by bargaining for higher wages or salaries. If high-income workers succeeded in increasing their wages by 10 percent, close to half of this tax would be paid by their employers. The higher tax reduces received wages; higher wages increase paid wages. At this point, the exact division of tax burden between employees and employers depends on the relative bargaining position of all of these people in the labor market. The fact of the matter is that high-income employees will pass some, perhaps even most, of any higher progressive tax onto their employers.

Employers will hire fewer high-income employees, and will try to pass their increased labor costs onto their customers. This now depends on the relative bargaining power of the seller and his customers. To the extent that business owners can raise prices without comparatively large losses in sales volume, they can pass off most of their increased tax costs to consumers. Consumers who still buy at a higher price end up paying for part of the tax that was supposed to affect only "the rich." The political Right is wrong in its contention that the bottom do not pay for income taxes. Everyone pays sales taxes directly, but middle- and lower-income Americans end up paying for part of the taxes that were targeted at higher-income Americans. The political Left is also wrong. The actual burdens of higher taxes cannot be isolated to "the rich." Poor and middle-income Americans are already paying hidden taxes through higher prices. Additional increases in explicit taxes on the top 1 or 5 percent would increase the hidden tax burdens that everyone else already bears.

One could argue that the aforementioned hidden tax burdens are often small. Perhaps only a small percentage of the taxes that get passed on to employers get passed on a second time to consumers in the form of higher prices. If employers simply face higher marginal labor costs without higher marginal revenues, their profit margins decrease. Decreases in the returns on business investment inhibit future growth. Slow economic growth translates into slow future growth in wages and income for most everybody. The effects of taxes on growth are, possibly, more subtle than the price.

Market economies are complex systems where everybody's interests are intertwined. Efforts to change the results of market competition will entail unintended consequences. The concept of social justice is itself undefined and arbitrary. However, even if we were to somehow all agree on one notion of "socially just" redistribution, there is no practical way of actually structuring taxes (or government spending) to achieve that goal. The imposition of new taxes shifts wages and prices in ways that are impossible to predict beforehand and difficult to measure even after the fact.

Both Right and Left appear to have embraced the myth that the state is capable of restricting the effects of taxation to targeted persons. While we cannot measure everyone's actual tax burdens precisely, we do know that real tax burdens deviate significantly from intended tax burdens. High-income persons do not pay as much as official tax rates suggest. Markets spread tax burdens more evenly than most people realize. Efforts to "make the rich pay their fair share" therefore increase the true shared burden through indirect and hidden taxation. The benefits of tax cuts are also more broadly shared than most people realize.

There are two main lessons to take away from this. First, none of us is ever really "on our own," because the market system is a social system. Second, politicians cannot use taxes to attain any particular set of goals for income "fairness" because the market system is extraordinarily complex and adaptable, and politicians are themselves anything but omniscient. An omniscient and omnipotent authority could impose some notion of social justice. The reality we face is that social justice is both arbitrary and practically unenforceable. These two lessons have important implications.

Fortunately, there is an easy solution to the problem of tax avoidance. We can all avoid heavy tax burdens if public officials cut wasteful or unnecessary federal spending. Detailed analysis of all public spending is obviously very complicated task, but much of this work has already been done. Few federal programs either come close to the economic definition of a public good or conform to constitutional limits on the federal government. We all pay unnecessarily high taxes. We can all pay less.