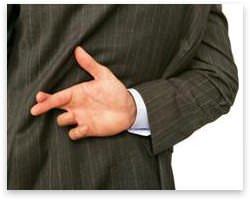 The purpose of government is for those who run it to plunder those who do not. Throughout history, governments have used violence, intimidation, coercion, and mass murder to enforce this system. But governments' first line of "defense" is always a blizzard of lies — about its own alleged benevolence, altruism, heroism, and greatness, along with equally big lies about the "evils" of the civil society, especially the free market.

The current economic crisis, which was instigated by the government's central bank and its boom-and-bust monetary policies, among other interventions, has once again been blamed on "too little regulation" and too much freedom.

Will Americans ever catch on to this biggest of all of government's Big Lies?

When the Pilgrims came to America, they nearly starved to death because they adopted communal agriculture. When William Bradford, leader of the Mayflower expedition, figured this out he reorganized the Massachusetts pilgrims in a regime of private property in land. The incentives created by private property promptly created a dramatic economic turnaround and the rest is history. Most history books ignore this reality, however, and blame the starvation crisis of the Pilgrims on corporate greed on the part of the Mayflower company.

After the American Revolution, it was imperative to build roads and canals so that commerce could expand and the economy thrive. George Washington's Treasury secretary, Alexander Hamilton, declared in his famous Report on Manufactures that private road and canal building would never succeed without government subsidies. President Thomas Jefferson's Treasury secretary, Albert Gallatin, concurred. Meanwhile, private capital markets and the private "turnpike" industry were busy financing thousands of miles of private roads without any governmental assistance. When government did intervene in early-American road building, it was a financial catastrophe almost everywhere, so much so that by 1860 only Missouri and Massachusetts had not amended their state constitutions to prohibit the use of tax dollars for "internal improvements."

Americans have been taught by their government-run schools that the post-1865 Industrial Revolution was bad for the working class, which made government regulation of work and wages, and the creation and prospering of labor unions necessary. In reality, people left the farms for factories because the latter offered far better wages and working conditions. Between 1860 and 1890, real wages increased by 50 percent in America, as myriad new products were invented, and made available to the common working person thanks to low-cost, mass production. It was capital investment that dramatically increased the productivity of labor, allowing hours worked to decline from an average of 61 hours per week in 1870 to 48 hours by 1929.

Higher worker productivity, fueled mostly by capital investment by entrepreneurs and private investors, also made it less necessary for families to force their children to work. Child labor was on the wane for decades before government got around to regulating or outlawing it. And when it did so it was to protect unionized labor from competition, not to protect children from harsh working conditions.

The "robber barons" of the late 19th century robbed no one. Most of them made their money by providing valuable — if not revolutionary — goods and services to the masses at lower and lower prices for decades at a time. John D. Rockefeller, for example, caused the price of refined petroleum to drop from 30 cents per gallon in 1869 to 8 cents in 1885, and continued to drop his prices for many years thereafter. James J. Hill built the most efficient and profitable transcontinental railroad without a dime's worth of government subsidy. In return for their remarkable free-market success the government prosecuted both of these men, kangaroo court style, under the protectionist "antitrust" laws. The real "robbers" were politically connected businessmen like Leland Stanford, a former California governor and senator, who succeeded in getting laws passed that granted his company a monopoly in the California railroad business. 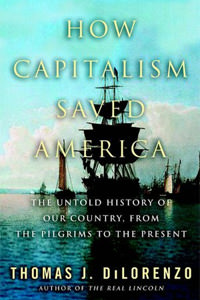 The federal antitrust laws were passed beginning with the Sherman Antitrust Act of 1890 because the government informed Americans that industry was becoming "rampantly cartelized" or monopolized. In reality, prices everywhere were plummeting as new products and services were being invented everywhere. The entire period from 1865 to 1900 was a period of price deflation. As I show in How Capitalism Saved America, all of the industries accused of being monopolies by Congress in 1889–1890 had been dropping their prices for at least a decade thanks to vigorous competition. And it was not a result of the idiotic theory of "predatory pricing." No sane businessperson would intentionally lose money for decades by pricing below cost with the hope that he would somehow frighten away all competition forevermore.

Everyone "knows" that President Herbert Hoover was a staunch advocate of laissez-faire economics, and it was his lack of interventionism that caused the Great Depression. This is the biggest governmental lie in the history of America. Hoover was a "progressive" (as today's socialists, also known as "Democrats," have taken to calling themselves).

Hoover strong-armed corporate executives into raising wages at a time when wages needed to adjust downward in the free market in order to minimize unemployment. He devoted 13% of the federal budget to a failed "stimulus" program of pork-barrel spending and imposed some of the biggest tax increases in history to fund it all. He was a protectionist who signed the notorious Smoot-Hawley Tariff Act, which increased the average tariff rate to nearly 60 percent and spawned a worldwide trade war that shrunk world trade by two-thirds in three years. He cartelized the agricultural industry with "farm boards" that began the insane practice of paying farmers for not growing crops or raising livestock. He pioneered the politicization of capital markets by creating the Reconstruction Finance Corporation. And he ranted and raved against "greedy capitalists" while launching numerous government "investigations" of investors and the stock market. FDR's top domestic advisor, Rexford Tugwell, said that his fellow New Dealers "owed much to Hoover," who began many of the policies that they simply extended.

Every time the price of gasoline goes up significantly, Congress convenes a Nuremburg Trial–style inquisition of oil-company executives. This practice began in the 1970s when the government's own foolish price controls on petroleum products caused massive shortages, and it needed someone to blame. Oil company executives are never praised when gasoline prices fall, as they have in the past year from over $4/gallon to under $2/gallon in many parts of the United States.

Most recently, the current economic crisis is said to be caused by the "excesses" of economic freedom and "too little regulation" of the economy, especially financial markets. This is said by the president and numerous other politicians, with straight faces, despite the facts that there are a dozen executive-branch cabinet departments, over 100 federal agencies, more than 85,000 pages in the Federal Register, and dozens of state and local government agencies that regulate, regiment, tax, and control every aspect of every business in America, and have been doing so for decades.

Laissez-faire run amok in financial markets is said to be a cause of the current crisis. But the Fed alone — a secret government organization that is accountable to no one and which has never been audited — performs hundreds of regulatory functions, in addition to recklessly manipulating the money supply. And it is just one of numerous financial regulatory agencies (the SEC, Comptroller of the Currency, Office of Thrift Supervision, FDIC, and numerous state regulators also exist). In a Fed publication entitled "The Federal Reserve System: Purposes and Functions," it is explained that "The Federal Reserve has supervisory and regulatory authority over a wide range of financial institutions and activities." That's the understatement of the century. Among the Fed's functions are the regulation of

That's a pretty comprehensive list, the result of 96 years of bureaucratic empire building by Fed bureaucrats. It gives the lie to the notion that there has been "too little regulation" of financial markets. Anyone who makes such an argument is either ignorant of the truth or is lying.