The Myth of "Nazi Capitalism" 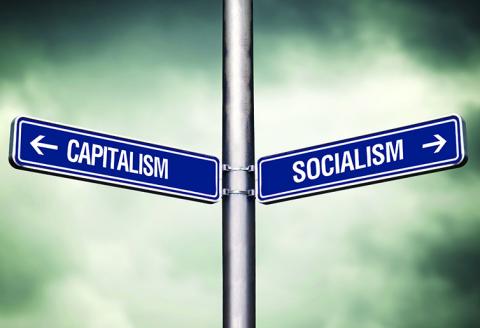 I came across a clever tweet recently claiming that people who say ”The Nazis were socialists, it’s in the name!” must be ”very confused by buffalo wings.” It is now the conventional wisdom that the Nazis were capitalists, not socialists, despite their misleading name “The National Socialist German Workers Party.” Anybody with a college degree knows they were capitalistic, if not in name, then at least in principle.

Of course, this is all nonsense. But the question does arise, where did this myth come from? Mises, in fact, answered this question in 1951 in his essay “Planned Chaos.”

During the nineteenth century, when socialism was becoming fashionable in Europe, there was no distinction between “socialism” and “communism.” There were different forms of socialism, of course, but these were not distinguished by the different terms. Different thinkers had their preference, but the terms were used interchangeably, even by Karl Marx. Mises writes, ”In 1875, in his Criticism of the Gotha Programme of the German Social Democratic Party, Marx distinguished between a lower (earlier) and a higher (later) phase of the future communist society. But he did not reserve the name of communism to the higher phase, and did not call the lower phase socialism as differentiated from communism.”

According to Marx’s theory of history, socialism was an inevitability. According to his deterministic outlook, every country was destined to progress from a feudalist society, to a capitalist, and finally to a socialist society. To Marx, this progression was inevitable.

In Germany, the first purveyors of “State socialism” emerged shortly prior to Marx. Johann Karl Rodbertus, like Marx, rejected many of the existing socialist theories as untenable. Rodbertus was the first socialist thinker to advocate the control of both production and distribution, and to achieve this, the socialist must use the State. The greatest expositor of his ideas was Ferdinand Lassalle, whose proselytizing led to the rapid growth in popularity of what Mises would call “socialism of the German pattern.”

German socialism, as Mises defines it, differs from what he called “socialism of the Russian pattern” in that “it, seemingly and nominally, maintains private ownership of the means of production, entrepreneurship, and market exchange.” However, this is only a superficial system of private ownership because through a complete system of economic intervention and control, the entrepreneurial function of the property owners is completely controlled by the State. By this, Mises means that shop owners do not speculate about future events for the purpose of allocating resources in the pursuit of profits. Just like in the Soviet Union, this entrepreneurial speculation and resource allocation is done by a single entity, the State, and economic  calculation is thus impossible.

“In Nazi Germany,” Mises tells us, the property owners “were called shop managers or Betriebsführer. The government tells these seeming entrepreneurs what and how to produce, at what prices and from whom to buy, at what prices and to whom to sell. The government decrees at what wages labourers should work, and to whom and under what terms the capitalists should entrust their funds. Market exchange is but a sham. As all prices, wages and interest rates are fixed by the authority, they are prices, wages and interest rates in appearance only; in fact they are merely quantitative terms in the authoritarian orders determining each citizen’s income, consumption and standard of living. The authority, not the consumers, directs production. The central board of production management is supreme; all citizens are nothing else but civil servants. This is socialism with the outward appearance of capitalism. Some labels of the capitalistic market economy are retained, but they signify here something entirely different from what they mean in the market economy.”

But the Soviets themselves also played a part in the crafting of the myth of the Nazi capitalist. The Nazis were not trying to hide their socialism (after all, snarky tweets aside, socialism was in  the name); they were just implementing socialism according to a different strategy than that of the Marxist socialists.

The Soviets were able to brand the Nazis as capitalists only because they had already started redefining the terms “socialism” and “communism” to fit their own political agenda. In 1912, Lenin formed his Communist Party. The members of his party, the Bolsheviks, were now distinct from the other, rival groups of socialists. The terms “communism” and “socialism” were still able to be used interchangeably, and the Soviet Union itself was just a shorthand name for the “United Soviet Socialist Republics.” But by branding his group under the title of the “Communist Party,” the title “Communist” — now meaning a member of Lenin’s party — became a way of saying that this was a “true socialist,” so to speak.

“It was only in 1928,” Mises explains, “that the programme of the Communist International ... began to differentiate between communism and socialism (and not merely between communist and socialist).” This new doctrine held that, in the Marxian framework, there was another stage of development between capitalism and communism. That stage, of course, was socialism, and it was the stage that the Soviet Union was in.

In his original theory, Marx made a distinction between early- and late-stage communism, where true equality would be reached only in the final stage of communism, after the State had successfully followed all of his prescriptions and humans had evolved beyond their “class consciousness.” In the new doctrine, “socialism” simply referred to Marx’s early-stage communism, while true communism — Marx’s late-stage communism — would not be achieved until the whole world was communist. Thus, the Soviet Union was merely socialist, and the party members were Communists because they were the enlightened few who were working toward the ultimate goal of communism.

But the Nazis still claimed to be socialist and, in fact, were acting quite a bit like socialists with their heavy-handed economic interventions. However, there was still economic inequality among the citizens of Nazi Germany (just as there was in the Soviet Union, but that didn’t matter to the narrative). Furthermore, as Mises pointed out in his analysis of socialism of the German pattern, the Nazis retained some of the legal language of a capitalist society. Specifically, there was still the superficial existence of nominal property ownership.

When the Nazis invaded the Soviet Union, Joseph Stalin and his lackeys used the new communist narrative to redefine Nazi Socialism — which was never Marxism but was based on the theories of the original German socialists who directly influenced Marx’s later ideas — as “capitalists.” According to this new narrative, the Nazis were in the final and worst stage of capitalism.

At a time when many members of the European intelligentsia were still enamored with the Soviet Union, this narrative of the Nazis as capitalists was a welcome lie. But this idea is one that comes not from any grounding in economic principles, but rather the Soviet interpretation of the Marxian framework. The Nazis, who touted their socialism proudly and implemented socialist policies with great consistency, were now being referred to as capitalists for no reason other than they did not fit cleanly into the Soviet-Marxist worldview, and this false narrative survives today.