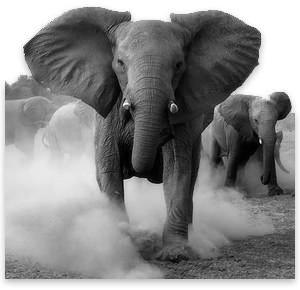 As the economic debacle facing Americans continues to materialize, those responsible are running for cover with ten Republican senators refusing to attend their own national convention. Four years ago we observed that the so-called "Republican philosophy" of small government, sound money, and balanced budgets was illusory in terms of the history and then-current policies of the Republican Party.[1] However, even we would never have guessed how awful the Republican Party economic policy would become. From mere mercantilism, the Republican Party is now flirting with comprehensive socialist economic policy and another Great Depression.

From FDR's New Deal to LBJ's Great Society, Democratic policies forced many free-market activists into the Republican fold. People like Robert Taft, Barry Goldwater, Ronald Reagan, and of course Ron Paul, represent this free-market faction in the Republican Party. For example, free markets, deregulation, and balanced budgets became the Republican mantra (if not reality) during the Reagan administration. The orchestrated marginalization of Ron Paul is just one indicator that the free-market faction has been routed and that the mercantilists are firmly in control. In fact, as we endure the current economic malaise, we can note that the Republican-dominated Congress (1994–2006) and the administrations of George W. Bush have morphed Republican-style mercantilism into corporate socialism.

Harmful military spending, unbalanced budgets, fiscal irresponsibility, protectionist and monopoly handouts to friends is the old style Republican playbook. The new style is audacious, unprecedented, and truly awful for the economy. It begins with the Republican-controlled Federal Reserve, which, under Alan Greenspan and Ben Bernanke, has flooded the economy with money and credit and bailed out every economic crisis since 1987. Greenspan's admonitions against "irrational exuberance" apparently were not intended to restrain the Federal Reserve's irresponsible monetary policy. Who in their right mind could honestly say that the Fed had nothing to do with the housing bubble after driving the nominal interest rate to 1% and proclaiming that the mortgage market was well regulated?

But an insidious form of "market-based policy" is also a real culprit in the current mess. In 1999 a bill was passed by a Republican Congress and signed by Democratic President Bill Clinton that rescinded the Depression era's divorce of commercial banking activities from investment banking, called the Glass-Stegall Act of 1933. That opened a floodgate of "creative" financial instruments backed by notes and other commercial paper. Much of the banking regulation of the Roosevelt administration — including abandonment of the gold standard — made absolutely no sense, but markets can fail with dire short-run consequences under a fiat monetary system. With Glass-Stegall, Congress put its finger on and mitigated the tendency and temptations of banks to create massive costly externalities to society, in this case, by holding bundled mortgage-backed securities which were deemed safe by rating agencies but which ultimately failed the market test.

The Financial Services Modernization Act of 1999 would make perfect sense in a world regulated by a gold standard, 100% reserve banking, and no FDIC deposit insurance; but in the world as it is, this "deregulation" amounts to corporate welfare for financial institutions and a moral hazard that will make taxpayers pay dearly. Such government privileges are nothing new to Republicans — consider the effective subsidies to the pharmaceutical, sugar, and steel industries — but this particular gift to financial institutions is what allowed the credit bubble to expand to such absurd proportions, because it allowed banks of all types to engage in increasingly risky transactions and to greatly expand the leverage of their balance sheets. As the crisis unfolds, credit continues to contract, the risk of bank failures increases, and the possibility of far more serious economic consequences become more apparent. The S&L crisis cost the taxpayers a few hundred billion, but this crisis has the potential of saddling the taxpayer with several trillion in bailouts.

So far, the Republican solution has been to bail out lenders — wealthy financial-industry professionals for the most part — who made unwise market decisions with subsidies and election-year subventions. With Hank Paulson, the former CEO of Goldman Sachs, as Secretary of the Treasury and the big banks on the Board of Directors of the New York Fed, it should not be too surprising that the Fed has been listening only to Wall Street while ignoring Main Street.

But the real problem is that their policies will lead to the nationalization of much of the mortgage-real-estate market. On July 30, 2008, President George Bush signed a bill into law that bails out Fannie Mae and Freddie Mac to the tune of an estimated $25 billion dollars in taxpayer losses, according to the Congressional Budget Office (CBO). The bailout is intended to stabilize the short-term economy, but this ill-conceived nod to socialism will have disastrous long-term effects. First, according to most economic estimates, the bill that taxpayers would have to eat is many times larger than the laughably small CBO estimate. Economist Don A. Rich has calculated the possible losses at as low as $1.3 to $1.6 trillion given likely housing price declines and as high as $2.5 trillion (if the housing price fall mimics that of the Great Depression).[2] The fallout from either of these scenarios would be catastrophic as the Federal Reserve accommodated (within the fiat money system) the taxpayer-backed debt. The real debt would be inflated away and America's real income could be reduced by as much as twenty percent.

The expansion of Federal Reserve authority is almost as alarming as nationalizing the mortgage industry. While the bailout includes the typical reductions in the Federal Funds Rate and the Discount Rate, it also includes the unprecedented moves to auction off discount rate loans, accept mortgage-backed securities in exchange for the Fed's Treasury Notes and the financing of J.P. Morgan's takeover of Bear Sterns. In May, the Fed began to allow investment firms to draw emergency loans directly from the central bank, and in July, it began to allow Fannie Mae and Freddie Mac to do the same even though such lending privileges had traditionally been restricted to commercial banks that have been subject to stricter regulatory supervision. All of this is predictable given the repeal of Glass-Stegall, which expanded the bad business practices that now "require" an expansion of the bailout.

But we see an even more insidious long-term economic problem, if that is imaginable. Moral hazard is endemic to this Bush-backed scheme to "relieve" an election-year economy. While the bill passed in late July does include some tighter regulation for the mortgage companies, it undeniably increases incentives for market participants — buyers and sellers — to engage in risky behavior. That is one of the products of financial socialism under a fiat monetary system — a system that mainly benefits wealthy lenders. Heads you win, tails you do not lose.

Further, every incentive by profit-seeking lenders and asset-poor buyers will be in place for a continuing or recurrent mortgage debacle. Financial institutions will not only have mercantile "protection" from the federal government in terms of regulations; they will become social arms of that government. While Democrats certainly facilitated these economic actions as fellow travelers, Republicans, most especially George W. Bush, acquiesced. (His only objection was a $4 billion grant to states and cities to "refurbish" foreclosed homes). The economic choice is clear: either maintain a fiat-money-creation system and reinstate the asset proscriptions of the Glass-Stegall Act or abandon or modify the existing system of money and banking altogether, possibly including elements of a gold standard. Without some basic alteration in rules, the entire economic system will continue to be at risk, as will America's predominance in the world of finance.

Robert Ekelund is eminent scholar emeritus at Auburn University. He is author of The Marketplace of Christianity (2006) and Economic Origins of Roman Christianity (2011), and co-author (with Mark Thornton) of Tariffs, Blockades, and Inflation: The Economics of the Civil War.