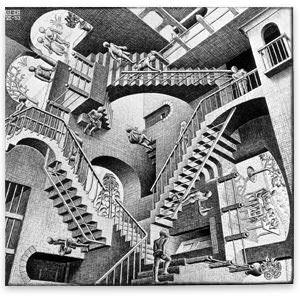 Tags History of the Austrian School of EconomicsPhilosophy and MethodologyPraxeology

[This article is excerpted from an unpublished report to the Volker Fund, written in the summer of 1960, on their Symposium on Relativism, at which Ludwig von Mises presented the paper, "Epistemological Relativism in the Sciences of Human Action."]

I think it important to delineate briefly what relativism is and what the issues are on this important topic. Let us first consider the polar opposite of relativism: absolutism. The absolutist believes that man's mind, employing reason (which according to some absolutists is divinely inspired, according to others is given by nature), is capable of discovering and knowing truth: including the truth about reality, and the truth about what is best for man and best for himself as an individual.

The relativist denies this, denies that man's reason is capable of knowing truth, and does so by claiming that rather than being absolute, truth is relative to something else. This something else may be different things, and so there can be many kinds of relativist; some of these things have been the subject of psychology of each individual, the economic interests of the individual (or of the "class" to which he belongs), the "Spirit of the Age" in which the person happens to live, the social structure of the society in which he lives, his "culture," his race, etc. Philosophically, I believe that libertarianism — and the wider creed of sound individualism of which libertarianism is a part — must rest on absolutism and deny relativism.

The bulk of this essay by Mises, the preeminent economist and praxeologist of our time, deals in his profound and unique way with a defense of economics against such relativist opponents as the historicists, who claimed that economic laws must be relative to each historical epoch. There are many excellent points made: an exposition of the Windelband-Rickert refutation of positivist methods in the sciences of human action; a critique of the deficiencies of the classical economists in confining themselves to a study of wealth and production, and therefore in fragmenting action into the "economic" and "noneconomic" spheres; critiques of the radical empiricists such as the intuitionalists, of Max Weber, and of the nature of historical events

In short, Mises attacks the various schools of epistemological relativism in the sciences of human action, and defends the absolute and eternal truths arrived at by the science of praxeology. As a result, this paper, as is almost any by Mises, is excellent and worth reading by every scholar. (I would consider the fundamental axioms of praxeology as based empirically on the nature of man rather than on "the logical structure of the human mind" as Mises does, but this is not important here.)

Having said this, and never being able to express how much of an enormous intellectual debt I owe to Mises, I must record two important defects in the paper, which stem from what I consider basic weaknesses in the Mises worldview. One is Mises's attempt to deny anyone the use of the concept "irrational." Mises categorically denies that anyone can ever act irrationally, either in the means he undertakes or in the ends for which he strives. I think this is flatly wrong, especially since Mises wishes to retain the concept of rational, and apply it to all of man's actions. I cannot see how we can retain the term rational, while denying anyone the use of its opposite: "irrational." If Mises maintains that no one can ever act irrationally, then he is simply using "rational" as a synonym for "purposive," and this means that he is using the term rational in a sense that no one else uses and is therefore illegitimate. Instead of denying that anyone could act irrationally, Mises should simply not use rational or irrational at all, and leave the term to psychology and ethics.

Thus, Mises asserts that we cannot say that the tribe using medicine men or a person in the Middle Ages using magic to attain their ends was irrational; after all, says Mises, they believed that their means were helping them to attain their ends (say, rainmaking or cure of disease), and a hundred years from now a doctor could just as well say that present-day doctors are "irrational" for using such a quaint method of cure as penicillin. The belief of the people using magic, however, is irrelevant to the issues; nobody denies that they thought they were accomplishing something.

Furthermore, magic is not in the same category as penicillin; for the use of penicillin rests on a scientific method, on an epistemology that can discover, by reason and by sense experimentation analyzed by reason, that penicillin can be used as cures for disease. The fact that, fifty years from now, the advance of science will discover better cures does not make the present use of penicillin irrational — although, by the way, it would make the use of penicillin a hundred years from now irrational. But magic is in a completely different category; magic, by its very methodology is totally irrational and incapable of arriving at what it is supposed to achieve; and we can be assured that no "advance" a hundred years from now in the ritual of magic could ever improve its performance. The use of magic is therefore irrational, whether in the past, present, or future.

Moreover, not only can we say with absolute assurance that certain methods and means are irrational, but can also go on to say that certain ends are irrational. Suppose that A's end is to torture B, because A enjoys it. Even if it lies within A's power to do so, and even if A need not fear retaliation by the police or by B or B's friends, I think it can be demonstrated that such torture and love of torture is contrary to the nature of man and to what is required by that nature for man's true happiness; I think it can be demonstrated that such perversions of man's nature are profoundly irrational. Yet Mises would insist on adding "from my personal point of view." It is not just my or your subjective "point of view" that decrees this; it is our objective, absolute insight into the discoverable nature of man.

What has happened here, and elsewhere, is that Mises has strayed off his great stomping ground, praxeology, on to a field, ethics, where he is, I believe, tragically wrong. For irrationality or rationality of ends involve an ethical judgment, and Mises's subjectivity that we have just noted means simply this: that Mises, while a praxeological or epistemological absolutist, is, unfortunately, an ethical relativist. To Mises, there is no such a thing as absolute ethics; man, by the use of his mind, cannot discover a true, "scientific" ethics by insight into what is best for man's nature. Ultimate ends, values, ethics, are simply subjective, personal, and purely arbitrary. If they are arbitrary, Mises never explains where they come from: how any individual arrives at them. I can't see how he could arrive at any answer except the subjective, relative emotions of each individual.

This, Mises's ethical relativism, is his second great defect in this paper, and we have seen how it is intimately tied up with the first. As a result, Mises, excellent when he criticizes governments for opposing economics because economic science shows that governments cannot accomplish their objectives, falters when he tried to refute the ethical contentions of the statists.

Thus, Mises says, in his final section, that the enemies of economics and of capitalism blame private enterprise as immoral, and materialistic, and praise Soviet Russia as well as equality of incomes as more ethical. What can Mises reply to this? Only that it is all "emotional talk," that praxeology and economics are neutral to ethics (true, but irrelevant), and that these statists should try to refute economic teachings by "discursive reasoning, not by … appeal to arbitrary allegedly ethical standards."

We can surely agree that it is illegitimate for anyone, leftist or libertarian, to ignore and not fully consider the value-free laws of economics. But precisely because economics is neutral to ethics, this is hardly an answer. For to Mises, all ethics is "arbitrary," and yet, even Mises must admit that no one can decide any policy unless he does make an ethical judgment. The man who understands economics and then chooses liberty is, or should be, considered by Mises to be just as "arbitrary" as the man who chooses egalitarianism, after accepting, say, the economic consequences of lessened productivity. And since either decision, according to Mises, is ultimately arbitrary, he cannot finally refute the interventionists in this way. And as for the opposition being "emotional," this may well be, but we have seen that emotion is the only groundwork that Mises can find for ultimate values anyway.

How has Mises been able to be an ethical relativist and still be the great champion that he has been of economic liberty? By what I consider an illegitimate assumption. Thus: "Economics pointed out that many cherished (interventionist) policies … bring about … effects which — from the point of view of those who advocated and applied them — were even more unsatisfactory than the conditions which they were designed to alter…"

It is this assumption — that even the advocates really are worse off — that permits Mises to say that they are "bad." But how can Mises know what motivates the statists? Suppose, for example, the price controller wants power, and doesn't care if it creates shortages; he has power and the perquisites of a soft job in the bureaucracy; suppose that he is a Communist, and wants to create shortages (or is a nihilist and hates everyone, and wants to create shortages); suppose that someone who wants to confiscate the rich has a very high time preference and doesn't care if the economy will be wrecked in twenty years. What then?

In short, it is illegitimate for Mises to assume that, knowing all the consequences shown by economics, everyone will consider himself worse off from the statist measure. When Mises says that repeal of such measures "would benefit the rightly understood or long-run interests of all the people," and are championed by vested "short-run interests," suppose, as we have just indicated, the time preferences of the latter are high; or suppose, even aside from the time preference, that the amount X can mulct from everyone by some interventionist measure is greater than the amount he will lose as a consumer.

What I have been trying to say is that Mises's utilitarian, relativist approach to ethics is not nearly enough to establish a full case for liberty. It must be supplemented by an absolutist ethic — an ethic of liberty, as well as of other values needed for the health and development of the individual — grounded on natural law, i.e., discovery of the laws of man's nature. Failure to recognize this is the greatest flaw in Mises's philosophical worldview.

Yes, and there is also a third category of writers: those who accept both praxeological and ethical absolutism, and recognize that both are vitally necessary for a complete philosophical view, as well as for the achievement of liberty.

I hope it is clear that this extended discussion is not intended to deny the great overall merits of Mises's paper and its importance for all scholars of human action.