The Mises We Never Knew 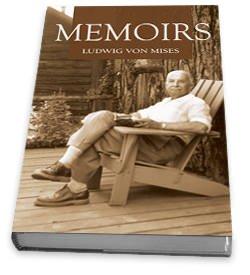 When Ludwig von Mises was in his hale and hearty 70s, those of us who were privileged to attend his graduate seminar at New York University used to gather with him after class for a snack at a local restaurant. One evening, after Mises — as so often happened — regaled us with marvelous anecdotes of life in old Vienna, one student urged him to write an autobiography to preserve his impressions in book form. It was the only time I ever saw this gentle man bristle, if ever so slightly. "Please, I am not yet old enough to write an autobiography." So much for that topic. No one had the temerity to point out to Mises that, in our current culture, many people, with absolutely nothing to say, publish their "autobiographies" in their early 20s.

Imagine my surprise and delight when I discovered that Mises, unbeknownst to anyone, had written an autobiography in 1940, as soon as he arrived in the United States, and had entrusted it to the care of his devoted wife, Margit. Thirty years later, when Margit suggested that he write an autobiography, he replied, "You have my two handwritten folders. That is all people need to know about me." After Mises died in October 1973, at the age of 92, Margit remembered the folders. As the result of her diligence, we now have Mises's Memoirs in published form.

This is the sort of autobiography we would expect from a private person of great courtesy and Old World reserve: It is an intellectual autobiography, explaining his ideological struggles and how he arrived at his ideas. There is no Instant Intimacy here, nor is there any fodder for emotional voyeurs.

And yet this is a bitter book, and understandably so. These memoirs were written at the wreckage of his once-great European career. It was not only that Mises found himself driven out of Europe by the Nazis and World War II, cast on the shores of the United States, and forced to begin a new career at the age of 59. For Mises was experiencing the bitter consequences of the statism and collectivism that he had fought for two decades in Austria and the rest of Europe. He had fought collectivism gallantly and virtually alone, and now he was to see innumerable socialist and communist refugees, driven out by another variant of their own statist doctrine, welcomed and accorded the highest academic honors in the United States, while he himself was to be neglected and scorned by American academia.

In particularly moving passages, Mises suggests that the drying up of the productivity of Carl Menger, the founder of Austrian economics; the early death of Menger's great disciple (and Mises's teacher) Eugen von Böhm-Bawerk; as well as the death of the eminent sociologist Max Weber and even the suicide of Archduke Rudolf at Mayerling, were all basically due to individual despair at ever-encroaching statism and the end of the classical-liberal world they knew and loved.

But it is clear that Mises was not the person to despair and give up. Despite adversity far beyond what his mentors had experienced, the doughty Mises decided to fight. As Mises writes,

How one carries on in the face of unavoidable catastrophe is a matter of temperament. In high school, as was custom, I had chosen a verse by Virgil to be my motto: Tu ne cede malis sed contra audentior ito ("Do not give in to evil, but proceed ever more boldly against it"). I recalled these words during the darkest hours of the war. … I would not lose courage even now. I wanted to do everything an economist could do. I would not tire in saying what I knew to be true. (p. 55)

Even for devoted Misesians there are many fascinating revelations about Mises's life and thought. There are devastating vignettes of German economists and sociologists, such as Werner Sombart. Friedrich von Wieser, Böhm-Bawerk's brother-in-law (who is usually considered a coleader of the Austrian School of economics), is treated more kindly, but Mises ultimately (and, I believe, correctly) dismisses Wieser as more a Walrasian than an Austrian School theorist. It is also fascinating to see that Mises was treated almost as shabbily by the Austrian academic world as by the American. Mises's famous "private seminar," which taught so many famous students and followers, turns out to be strictly his own, unconnected with the University of Vienna, at which he taught other courses. And never did Mises receive a salary from the university for his teaching there (in the tradition of the "private teacher" in Europe).

Most surprising to me was the great extent to which Mises had plunged into the world of applied economics and of politics. I knew that Mises's salary was always paid by the Handelskammer (Austrian Chamber of Commerce), but I had no idea how much empirical work he had done, ranging from studies of housing problems, to customs relations with Hungary, to problems of public debt. Particularly fascinating was Mises's role in politics, and the influence he was able to exert against overwhelming odds. Thus, almost single-handedly, Mises managed to slow down and halt the post–World War I inflation in Austria short of the runaway destruction of the currency that Germany experienced at the same time. By combatting cheap-credit policies, Mises and a few colleagues managed to delay, but not halt, the inflationary credit expansion that led to the collapse of the Austrian and the remainder of the European banking system in 1931.

But particularly fascinating is the story of Mises's crucial influence on his friend and fellow student in Böhm-Bawerk's seminar, the leading Austrian Marxist and head of the Social-Democratic party, Otto Bauer. First, Böhm-Bawerk managed to convince Bauer, at least privately, of the untenability of Marx's crucial concept of the labor theory of value. But more fatefully, in the winter of 1918–19, in the chaotic aftermath of World War I when Bauer could easily have imposed Bolshevism upon Vienna, Mises personally convinced Bauer, after numerous conversations, that the result would be starvation and collapse because of the Allied control of the food supply. Ironically, Bauer never forgave Mises for inducing him to betray his Bolshevik principles, and they never spoke to each other again.

Personal vignettes and recollections are by no means the sole content of Memoirs. There are also brief discussions of Mises's leading economic and methodological ideas, how he arrived at them, and how they are linked together.

All in all, Memoirs supplies a fascinating companion volume to his widow Margit's lovely valentine to their life together, My Years with Ludwig von Mises. Friends and students of Mises now know far more than they ever did about Mises's long and remarkably productive life, and younger generations of economists and libertarians, who never had the privilege of meeting Mises, now have these two volumes to read and ponder as the next-best substitute.

There is no more fitting way to end this review than to pay tribute to the remarkable integrity and fighting spirit of Ludwig von Mises. In the 1910s and 1920s, as today, there were small-minded men who criticized Mises's consistency and candor. If only he had been willing to bend principle a bit! Mises charmingly refers to such criticisms:

I was sometimes accused of representing my viewpoint in a manner too abrupt and intransigent. It was also claimed that I could have accomplished more had I displayed a greater willingness to compromise. … The criticism was unwarranted; I could only be effective if I could present things as they appeared to me. When I look back at my work with the Handelskammer today, my only regret is my willingness to compromise, and not my intransigence. (p. 60)

Only such a spirit could succeed in building a movement, Austrian and libertarian, twice in his distinguished career. More important, it is because of his great spirit, his unflinching integrity, that Mises's name will be honored so long as men shall reverence freedom.