GET NEWS AND ARTICLES IN YOUR INBOXPrint
A
A
Home | Mises Library | Mises versus Menger? 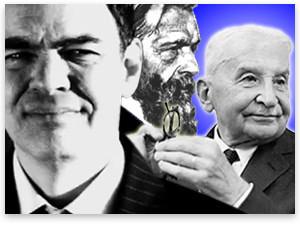 Max Keiser, in pursuit of his efforts to show that Mises lapsed into error in monetary theory owing to his deviations from Menger, has recently posted "Menger and Mises: The Essential Difference." The post is credited to "adamsmith1684"; whether this is Keiser himself I do not know. To complicate matters, the post begins with a quotation from Maurice Lagueux of Montreal University. It continues with additional material: again, I do not know whether this is intended as an explanation of Lagueux's ideas or as an independent line of thought by Keiser or adamsmith1684. (The quotation is excerpted from a paper by Lagueux, but unfortunately I could not gain access to it.) In what follows, I shall deal with these difficulties by ignoring them. I shall treat the post as a single line of thought, having Keiser's approval and perhaps written by him.

To speak of a "single line of thought" is a euphemism, as the post resembles, one assumes not deliberately, the doublespeak of Professor Irwin Corey. If in what follows I have inaccurately represented Keiser's ideas, I have at any rate done the best that I could in endeavoring to make out his meaning. Unlike Menger and Schrödinger, if Keiser is to be credited, I did not have the benefit of "Gangetic gurus" in my quest for understanding.

The argument we have to consider, if I have understood it, is this: Mises, in contrast with Menger, was a methodological dualist. He thought that the social sciences differed fundamentally in method from the physical sciences, but Menger denied this. Menger thought that the physical sciences and the moral sciences differed only in degree. The method that Mises thought proper in praxeology was entirely deductive and conceptual. By ignoring the empirical world, Mises's method paradoxically rendered him incapable of attaining a properly subjective theory of value. A correct account of subjective value must make use of a contrast between the subject's evaluations and the objective world. Because Mises by his conceptual method could not make use of this contrast, he failed in his account of value. This error led him to further mistakes about the theory of interest and the nature of money.

Such is Keiser's case — again, on the assumption that I have understood his autistic performance. I do not think there is anything to it. Let us begin with his contrast between Menger and Mises over method. For this contrast to be significant, it must be true that Menger and Mises differed in the method they thought suitable for economics. But this difference is not established by the quotation given from Lagueux. Even if Lagueux is right that the two thinkers differed on the similarity of the social and physical sciences, it does not follow that Mises and Menger differed at all about the correct method of economics. For all that the quotation shows, it might be the case that both Menger and Mises held the same opinion about method in economics, but that Menger thought this method was closer to the methods used in the physical sciences than did Mises.

Indeed, Menger's view of method in economics closely resembled Mises's. Menger thought that theoretical economics, as he called it, aimed to discover necessary relationships among economic phenomena. In thinking this, he was in essence an Aristotelian. Thus, he says, e.g.,

Theoretical economics has the task of investigating the general nature and the general connection of economic phenomena, not of analyzing economic concepts and drawing the logical conclusions resulting from this analysis. The phenomena, or certain aspects of them, and not their linguistic image, the concepts, are the objects of theoretical research in the field of economy. (Carl Menger, Investigations into the Method of the Social Sciences, p. 37, emphasis in original)

Although Menger considered economics an empirical science, he proceeds in essentially the same deductive manner as Mises when he derives the principles of economics. He says, e.g.,

If the requirements for a good are larger than the quantity of it available, and some part of the needs involved must remain unsatisfied in any case, the available quantity of the good can be diminished by no part of the whole amount, in any way practically worthy of notice, without causing some need, previously provided for, to be satisfied either not at all or only less completely than would otherwise have been the case. (Principles of Economics, p. 114)

He was not an empiricist in the modern sense, i.e., someone who denies the existence of metaphysically necessary connections in nature.

Given Menger's economic method, it is hardly surprising that Mises praises it highly. He says,

Carl Menger has not only provided an irrefutable praxeological theory of the origin of money. He has also recognized the import of his theory for the elucidation of fundamental principles of praxeology and its methods of research. (Human Action, p. 402)

Like Menger, Mises aimed to discover the general relationships existing among economic phenomena. Perhaps Keiser wrongly thinks otherwise because Mises proceeds by deduction. But Mises was concerned in praxeology, not with the investigation of words or ideas in his own mind, but with the nature of real actions in the world. Too often Mises is taken to be pursuing a Cartesian project: how can he be sure, many students have asked me over the years, that the ideas he derives from introspection of his own thoughts apply to other people as well? To ask this question is fundamentally to misconstrue what Mises was doing. He, like Menger, aimed to discern necessities in the world, not to limn some mental realm apart from the world.

Without discussing anew the endeavors to discredit the category of causality and determinism, we have to emphasize the fact that what is wrong with positivism is not what it teaches about the methods of the empirical natural sciences, but what it asserts about matters concerning which — up to now at least — the natural sciences have not succeeded in contributing any information. (The Ultimate Foundation of Economic Science, p. 119)

Mises, taking as he did a Humean view of causation in the physical sciences, would naturally see the division between economics and the physical sciences as sharper than did the Aristotelian Menger; but once more this shows no fundamental difference in their view of economic method.

With that fundamental point out of the way, Keiser's further confusions can readily be cleared away. Keiser — or rather adamsmith1684 — asserts that Mises confused "time — a mental precipitation — with the definition of time." He points out that "the definition of a second has changed over the decades." I am unable to understand what Keiser wants to say here. Why does he think that time is a mental precipitation: isn't there change and with it time in the physical world? "Time is the measure of motion" as Aristotle long ago said in book 4 of the Physics. The relevance of the point about the changing definition of the second entirely escapes me.

I commend Mises's discussion on the next few pages to Keiser's attention, assuming the Gangetic gurus grant him permission to read it.

It remains only to clear up one last confusion. Keiser quotes the following passage from Mises: "A [bank] note is a present good just as much as [gold] money" (The Theory of Money and Credit, pp. 304–5)

About this, he says, "This statement shows he thinks a claim to gold is equivalent to gold itself. That is patently false."

Of course Mises's statement implies no such thing. To say that both banknotes and gold are present goods is hardly to identify them. There is a well-known principle that says that objects with exactly the same properties are identical, but it is more than a little rash to claim that objects that share one property are identical. Suppose I am now trying to decide which of two present goods now before me, an apple and an orange, to eat. Would Keiser say that in calling both the apple and the orange present goods that I am claiming that the apple and orange are identical? One awaits the verdict of the Gangetic gurus.