The Miser Hurts No One But Herself 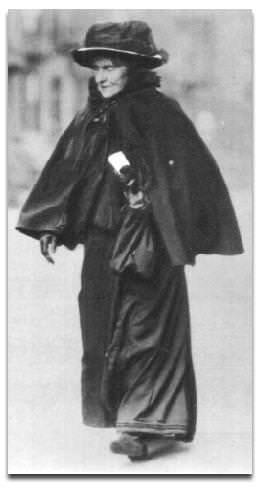 The latest chapter of John T. Flynn's Men of Wealth that has my head spinning concerns someone I probably should have known about, except that late 19th-century Wall Street lore is in short supply these days. But thanks to Flynn, I now know all about Hetty Green (1834–1916), whose weird and creepy life now haunts me to no end.

She was the richest woman of the Gilded Age, and sometimes the richest person, having died with a solid $200 million. But she was a miser. In fact, if the term describes her, it should describe no one else, or else we need some other modifier like x-treme miser or hyper-miser. This is a woman who refused to pay the doctor to treat her son's leg wound, so it later had to be amputated. She was once offered a horse for $200 and she was outraged at the price so she found out everything terrible she could on the seller and intimidated him down to $60. She rode the ferry with the cars rather than pay the passenger fee. She lived in a dumpy house in Hoboken. She had two changes of clothes, both black and tattered. She would travel hundreds of miles to collect debt payments. She never tipped.

She was wicked smart. Emphasis on wicked: she was called "the witch of Wall Street." On the smart part: her key to success was rather simple, so simple, says Flynn, that everyone preaches but hardly anyone practices it. She bought things that no one wanted and sold them when everyone wanted them. Nothing was permanent in her mind. So she bought bonds when they were crashing and dumped them when they were in high demand. She did the same with real estate, and railroads. She seemed to have money to lend when no one else did, so a long line of borrowers was always at her door. She offered tough terms and charged a high price.

Before she invested a dime in anything, she would find out the names of all the principles of the company. She would dig up every bit of dirt she could find. She would then take all the accusations against each person and interview them at length, demanding detailed answers. She would do the same when people came to her to borrow money. She wouldn't lend unless she felt she effectively owned the person in question.

As Flynn writes: "She was not a builder. She projected no great productive industry. Her business was to stand on the side and take her toll from those who were producers and builders and needed her money."

She was crazed with paranoia. She was convinced that everyone was out to kill her. When a wood beam fell nearby, she was sure that it was intended for her. Same with every mishap: the entire world was organizing against her, in her mind. She hated everyone and everything, truly.

Normally in a market economy, such people don't thrive. But she did, if only because she had the goods. She had been fascinated by finance when she was a young girl, as she read aloud the stock pages to her aging family members. She inherited some of their money made from the whale oil trade. She turned that into an enormous financial empire with which she did absolutely nothing except spend it on litigation. She loved the courtroom and sued many people. She insulted them in the courtroom with venomous comebacks and cruel words. She always lost.

Did she love? Briefly, apparently. Edward H. Green was a wealthy bachelor who, for some odd reason, took a liking to her. He wrote her a love letter, and, on the same day, wrote a check for a cheap suit of clothes from a tailor. He inadvertently switched the letters, so that Hetty got the letter intended for the tailor. She was so touched that he would spend so little on a suit that she agreed to marry him. Later he lost all his money. She provided no help and let him languish in poverty the rest of his days.

One good thing: she hated politicians. When they asked her railroad officials for free passes, she instructed the officials to hand them a card that read:

THURSDAY: "This generation shall not pass." Mark XIII, 30.

FRIDAY: "By a perpetual decree it shall not pass." Jeremiah V, 22.

What became of her money? Part of the estate was divided up in a thousand directions, owing to a complication in a family will. Part went to various family members. Nothing much came of any of it.

What can we say about this miser? I think we can say that she did much good, despite her wickedness and despite her horrid ways. She lent money at a profit. She bought when no one was buying and sold when everyone was. She engaged in mutually beneficial exchange. She was a pill to work with, but evidently people were happy enough about what she had to offer that they were willing to put up with it. Both sides of the exchange ended up better off than they were before.

Now, people on the left sometimes think that the market economy breeds such types. Not so. Hetty was famous for being unlike all her colleagues. Everyone was liberally minded by comparison. Indeed, the Gilded Age gave rise to the accusation that vast wealth makes people wild spendthrifts. Both can't be true.

What we can observe from the life of Hetty Green is that there are bad people in all kinds of institutions. Capitalism doesn't create misers; it turns their ways toward productive good. Hetty hurt no one but herself and those dear to her. The market economy localized the effects of her sins and contained them. She created massive value to society and was rewarded for it.

It is even hard to argue that she hurt herself. She was as happy as she could be just the way she was, and no amount of forcing her to be otherwise could have improved the situation. She embodied traits that we think of as being awful but she worked in an industry that allowed these traits to be turned to good for all. That is a credit to the market economy! Indeed, it is the highest praise of the free market that it can find a place even for someone so awful as this.

A note about Flynn's extraordinary book: it was published in 1941. Flynn was an old-time progressive, a journalist deeply suspicious of the business class. He was disgusted at the truth he saw about the New Deal: it was a racket concocted by the corporate class. He turned against FDR. He was shocked to see that his fellow liberals did not follow suit. Then he opposed U.S. entry into World War II. I suppose this book was written during his period of sadness, as a way of investigating the complex relationship between government and business. He gradually came around to a full-blown embrace of the free market as the only means to check the power of the government-business combine.

This is only one chapter. Every chapter is just as great. It is a phenomenal work, and it is a mystery to me that it seems to have been forgotten. Thank goodness this reprint is now available again.