Mass Unemployment in the Name of Norma Rae 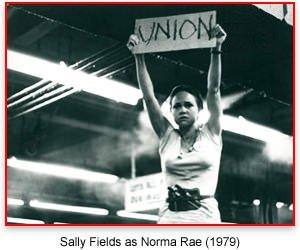 09/22/2009Doug French
Thirty years ago Sally Field won the Best Actress Academy Award for her gritty portrayal of Norma Rae, a widowed small-town Southern textile-mill worker. Even those who haven't seen the entire movie have viewed stills or clips of a sweaty Field standing atop a work bench holding over her head a piece of cardboard with UNION written in black letters.

The scene portrayed happened verbatim to the woman who inspired the movie, Crystal Lee Sutton, who acted in defiance after being fired for copying a flyer put up by the mill that claimed black workers would run the union she and labor organizer Eli Zivkovich were agitating for at the J.P. Stevens textile mill in Roanoke Rapids, North Carolina.

Ms. Sutton passed away September 11th, a victim of brain cancer, and union leaders are using her death to rejuvenate interest in the Employee Free Choice Act (EFCA). As membership in unions has plummeted in the last half century from over 35 percent of all workers in 1945 to just over 12 percent currently — and only 7.6 percent if government workers aren't included — labor leaders view EFCA as the magic bullet to increase union membership and, in turn, union political influence.

The EFCA is sometimes referred to in the press as the "card-check" bill because a key provision would do away with the requirement that the employees elect a union as their bargaining agent by way of a secret-ballot election. Instead, if a union is just able to obtain signatures on authorization cards from a majority of employees, EFCA would require that the union be certified by the National Labor Relations Board (NLRB).

"No one has ever succeeded in the effort to demonstrate that unionism could improve the conditions and raise the standard of living of all those eager to earn wages."
– Ludwig von Mises

Unions of course can (and do) harass employees at all hours of the day and night, coercing them to sign certification cards. A frightened employee who just wants to work and be left alone, will vote much differently if given the opportunity to cast a ballot in secret as opposed to having two thugs at his or her door late at night.

Although union brass are insisting publicly that the card check must be included, labor experts know that the binding arbitration provision in the EFCA is far more damaging to employers and, in turn, to employment. It requires that the government step in after 90 days and bring the employer and the union together if a contract has not been finalized. The government would assign an arbitrator who would impose wage and benefit terms for the company for the next two years.

Essentially, the unions know that the government would backstop their negotiating position. They would demand outrageous contract terms knowing government arbitrators will "split the baby," even if the terms are economically unviable for the employer.

So card check can be stripped from the bill, but the real poison for the economy lies in the binding arbitration provision that could put Uncle Sam at every bargaining table in the country.

The late Ms. Sutton was physically removed by police after stopping work with her makeshift demonstration at the J.P Stevens mill. The Amalgamated Clothing and Textile Workers Union won the right to represent the workers. But the contract took a decade to negotiate. And union leaders like Leo Gerard, USW International president, desperately want government to intervene in negotiations. "[Workers] never get to organize because of aggressive and illegal actions used with impunity by corporations that hire union-busting consultants," Gerard writes on The Hill's Congress Blog. "That is tragic for America because good union wages were critical to creating and are critical to sustaining the nation's middle class."

Mr. Gerard's comment implies that what is good for union labor is good for all labor. Of course this isn't true. "No one has ever succeeded in the effort to demonstrate that unionism could improve the conditions and raise the standard of living of all those eager to earn wages," Ludwig von Mises wrote.

At a time when unemployment rates are soaring, increased unionization will make labor just that much more expensive, with the result being fewer workers hired and more laid off. As even New York Times movie reviewer Vincent Canby recognized in his Norma Rae review back in 1979, the reason Crystal Lee Sutton had a $2.65 per hour job (over $10.50 in today's dollars) in the textile industry was because "the highly publicized industrial boom in the post-World War II South was largely the result of the cheaper (nonunion) wages that lured manufactures away from the Northeast and mid-Atlantic states."

And so it is today as nonunion car companies Toyota, Hyundai, and Kia manufacture products in the south, while union-wage crippled General Motors and Chrysler only survive by government bailout in Detroit. The motor city led all metropolitan areas of more than one million in population with an unemployment rate of 17.7 percent in July. And the news is nearly as bad in "the New Detroit," Las Vegas. The unemployment rate for August hit an all time high in Sin City at 13.4 percent. Since Nevada is a right-to-work state, most don't associate Vegas with unions, but the Culinary Workers Union Local 226 was 60,000 members strong before the economy hit the ditch, leading the late Hal Rothman to describe Las Vegas as "the most unionized city in the United States" in his book Neon Metropolis. Both cities' unemployment rates are considerably higher than the national rate of 9.7 percent.

"[T]he vast majority of American workers remain stubbornly nonunion despite the best efforts of labor unions, the federal government, its court intellectuals, and the mass media," writes Morgan Reynolds on Mises.org. But if big labor and their friends in big government have their way, in the name of Norma Rae, the Crystal Lee Suttons of the world will be unemployed.