The Lovely and Productive World of Thomas 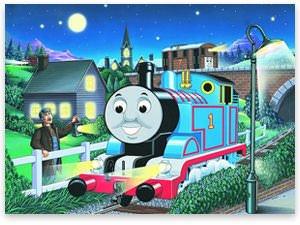 06/28/2011Robert P. Murphy
My six-year-old's interests have changed over the years, but one constant has been his fascination with vehicles. His most cherished vehicle is — in the words of one DVD — "everyone's favorite friend, Thomas."

In the present article I want to discuss how amazingly "bourgeois" is the world of Thomas the Tank Engine. I imagine anti-industry environmentalist parents would loathe it as much as conservative parents loathed the cartoon Captain Planet when it first came out.

The Island of Sodor

For those who are unfamiliar with Thomas's world, here's a quick synopsis: Thomas the Tank Engine is a small but sturdy blue engine who lives on the island of Sodor. I say that Thomas "lives" on Sodor, but a more accurate description would be to say that he works on Sodor. In all the books, DVD episodes, and even the feature-length film starring Peter Fonda and Alec Baldwin, I can't remember Thomas and his friends ever, say, celebrating a birthday party or playing a game of hide-and-steam. (Remember, folks, these are a bunch of trains.)

On the contrary, Thomas and the other engines are always doing jobs. Their boss is a portly human who not only wears a top hat but is actually named Sir Topham Hatt. In some depictions he carries around a stopwatch, because his role — as the official website tells us — is "making sure the engines are Right on Time and Really Useful." The capitalization in the sentence is intentional, because "Right on Time" and especially "Really Useful" are praised over and over in Sodor. That's what the engines strive to be. For Thomas and his friends, the worst thing ever would be to let down Sir Topham Hatt by showing up to the mine five minutes late to pick up a shipment of iron ore.

My guess is that kids adore Thomas & Friends simply because of who they are — a bunch of train engines and other vehicles such as Harold the Helicopter, Bertie the Bus, and Bulstrode the Barge. The books often involve the interconnections between the vehicles, such as Cranky the Crane loading up Thomas's freight cars at Brendam Docks.

Besides being inherently interesting vehicles, there is a lot more to Thomas & Friends that will appeal to parents, assuming they approve of the bourgeois value system.

Conflict on the Island of Sodor

There can't be an interesting TV show or book without some type of conflict. But in Thomas's world, the problem typically is not some truly "bad guy" trying to hurt the good guys. (In the feature-length movie they strayed into this territory with the big bully Diesel 10, but that isn't standard. Even in this unusual case, the only reason things got so out of hand was that Sir Topham Hatt was away, and the goofy Mr. Conductor couldn't fill those large shoes.)

Rather than fighting villains, the conflicts in a standard Thomas episode usually involve character flaws appearing among the engines as they go about their jobs for the day. Parents may be surprised to see that the coworkers in Thomas & Friends are cattier than those in the Dilbert comic strip. The strong engines taunt the weaker ones, the fast engines flaunt their speed in front of the slower ones, and so forth.

But fittingly for a children's show, the episodes always show how the characters can solve their problems by overcoming their flaws. For example, in an episode featuring the "narrow-gauge engines," their immediate superior, the human Mr. Percival, has to leave for a meeting with Sir Topham Hatt. Mr. Percival leaves the engine Sir Handel in charge, because Sir Handel is very wise.

Unfortunately, as Mr. Percival is explaining the urgency of the jobs that need to be completed in his absence, Sir Handel daydreams about being in charge. Now to be clear, the problem is not that Sir Handel, say, runs off to the lake and shirks his duties. Rather, the problem is that he takes too long to assign engines to the various tasks because he wants to hold out for just the perfect assignments, when — as Mr. Percival had stressed before leaving — the crucial thing was to get some engine doing each job right away.

As the reader might guess, in the end everything works out. Mr. Percival comes back, is shocked to learn that the load isn't ready for Thomas, and lights a fire (figuratively speaking) under Sir Handel to get it done. As the narrator tells us at the end of the episode, Sir Handel is now even wiser than he was at the beginning.

In another episode, the engine Duncan is bored with his assigned duty of taking several loads of straw to a farmer. So he starts offering to do the tasks assigned to the other engines. They accept his kind offer, but only after he assures them he "has enough time and will do a good job."

Alas, Duncan makes promises to three different engines and ends up wrecking the whole day's schedule, making for an irate farmer, stranded tourists, and a very upset Mr. Percival. Although he wasn't doing anything really bad in the cosmic sense, Duncan learns the error of his ways, and by the end of the episode he learns to appreciate the importance of finishing a job.

The Virtue of Thomas

Even Thomas himself has flaws. Sometimes he argues and even gets haughty with the other engines, overreacting to slight transgressions. (For a while my son — echoing Thomas — would announce that he was "very cross" with us when he didn't get his way.)

The reason Thomas is the hero of the show isn't his strength (Hiro is stronger) or his speed (Spencer is faster). Rather, Thomas's one superlative trait is that he's a "Very Useful" engine. More so than any others, Thomas is the goodie-two-wheels who always tries to do a good job and follow Sir Topham Hatt's instructions. (Thomas's other endearing quality is that his favorite job is to carry around children.)

Originally conceived by Reverend Awdry, Vicar of Emneth, the world of Thomas & Friends is an unabashed celebration of the bourgeois, industrial value system. Conservative and libertarian parents should consider checking out this hardworking, coal-burning blue engine, who constantly spews carbon dioxide into the atmosphere as he transports goods and passengers.