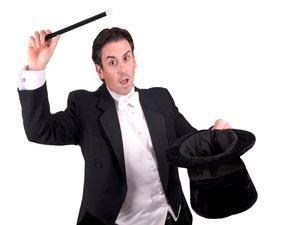 In the ebb and flow of interventionist politics, there are some issues that surface periodically regardless of how many times and how completely they are proven to be harmful to the very people they are purported to help. Currently the tide is once again carrying the minimum wage to the forefront of collective attention. Supporters of this and similar measures often use straw-man arguments, like the one in the picture below.

I discovered this ad through one of my friends who shared it on Facebook. It was originally posted on July 12, 2014 on the website of OurTime.org. I propose to deconstruct this pseudo-argument here, pointing out its major errors. I do this not to convince hard-core supporters of raising the minimum wage that it is a bad idea; I doubt that is possible by any means. Rather, this can be a short lesson for those interested in sound economic analysis in how to proceed when confronted by opposing arguments buttressed by seemingly sound statistics.

The statement in the box is worded rather ambiguously, which is typical for this type of argument. It can be interpreted two different ways. On the one hand, it could be claiming that the minimum wage hike caused the increase in employment. This is a clear violation of ceteris paribus (i.e., all other things being equal or held constant), which is at the core of any good analysis and cannot be stressed often enough. In order for that interpretation to be valid, we must assume that all states are identical in all other respects and that the increase in the minimum wage was the only economic condition that changed. This is clearly not the case. States use a variety of policy initiatives to encourage job growth; focusing on this one factor ignores significant heterogeneity among states. 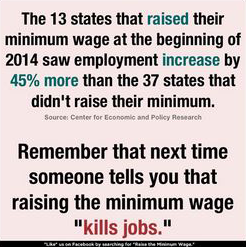 In its weaker form, the statement could merely be claiming that jobs were created in spite of the increase. This is obvious and trivial. In order for this interpretation to be meaningful we must assume that the minimum wage is the biggest kid on the block, the overriding factor that swamps all others. It’s all or nothing; either it kills all job growth or it’s not a factor. This is what makes the argument a straw man. It is overly simplified and no one who opposes the minimum wage takes the position it attempts to refute. The minimum wage is simply one factor among many affecting the job market; real-world outcomes are a result of a constellation of factors, each playing its part. But this is not the only thing wrong with this version of the argument — it gets better (or worse).

The argument in the picture implies that the minimum wage affects the entire labor market, but it clearly does not. It only affects that portion of the labor market where the law represents a binding constraint, that is, where market wages would be lower than the legal minimum. There is also heterogeneity among states here; some have a larger portion of workers earning near the minimum while others have relatively few workers at that level. If a state is experiencing growth in high tech jobs, skilled labor, or any other sector with market wages higher than the new legal minimum, there is no particular reason why that growth would not continue after the law takes effect, at least for a while. If a state has a relatively small portion of its labor force earning at or near minimum wage, growth in other sectors could easily override the immediate losses due to an increased minimum. If the minimum wage were raised only slightly, from one non-binding level to another, we would expect no discernable short-term effect on employment or job creation.

What is it that we really want to know about the effect of a minimum wage increase? We want to know what would have happened in the states affected by the law had that law not been passed, versus what did happen in the presence of the law. States that did not pass minimum wage increases are merely proxies for that unseen future, and they are meaningful proxies only if all other conditions are equal, as stated previously, or if we can reasonably approximate that condition. Thus a regression model might give a more realistic picture of the effects of the increase if we could control for enough other factors that affect job growth. The argument in the picture does nothing of the sort, of course.

Note that the picture refers to states that raised the minimum wage at the beginning of 2014. This means that we have at most six months of history to look at. This is far too short a time. The main effects of minimum wage legislation take the form of long-term structural changes as employers adapt to market conditions. Investment decisions are skewed toward capital rather than labor. Firms are not created that might have been. The effects show up in years, not months. Employment trends already underway may persist for some time after a new law is passed.

Economic phenomena are complex. Good economic analysis can’t generally be collapsed into a simple statistic. If the states that increased their minimum wage had experienced slower job growth than those that hadn’t, that would not be an indictment of the minimum wage, any more than the above statistic supports it. Without sound theory to explain them, such simple statistics are meaningless.