GET NEWS AND ARTICLES IN YOUR INBOXPrint
A
A
Home | Mises Library | Lenin and Marx: Sound Money Advocates? 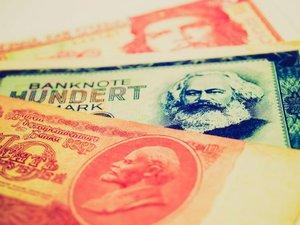 Most modern socialists are in favor of inflation, because it is supposed, in Keynes’s words, to “euthanize the rentiers.” It doesn’t mean however, that the “founding fathers” of socialism were in favor of inflation. In fact, the opposite is true. Karl Marx had a wide knowledge of the economic literature and even though he’s usually wrong, he was correct in his preference for a gold standard.

As for Lenin, he was in his writings opposed to inflation and saw paper money as a means used by the bourgeois capitalists to enrich themselves. Even though Marx and Lenin were not supporters of inflation, they supported sound money for the wrong reasons. But, at least, we can say that concerning money they did not succumb to naïve inflationist views.

Marx applied the labor value theory to money. According to Marx, the use of a particular commodity like gold or silver for money rests on the fact that — like all other commodities — there is an amount of “socially necessary labor” required to produce it. If, for example, one ounce of gold requires ten hours’ labor, its value is equal to another product requiring ten hours’ labor. Marx’s labor theory led him to say that “Although gold and silver are not by nature money, money is by nature gold and silver ...”

What Marx put forward was that the total value of needed currency represented a total amount of labor value, and therefore a total weight of gold. According to Marx, if the total of gold is replaced by inconvertible paper money and the paper money is then issued in excess, prices will go up:

If the paper money is in excess, if there is more of it than represents the amount of gold coins of like denomination which could actually be current, it will (apart from the danger of falling into general disrepute) represent only that quantity of gold, which, in accordance with the laws of circulation of commodities, is really required and is alone capable of being represented by paper. If the quantity of paper money issued is, for instance, double what it ought to be, then in actual fact one pound has become the money name of about one-eighth of an ounce of gold instead of about one-quarter of an ounce. The effect is the same as if an alteration had taken place in the function of gold as a standard of prices. The values previously expressed by the price £1 will now be expressed by the price £2.

Therefore, Marx opposed the use of inflation as a means for increasing production. However, Marx’s monetary theory is very confusing. Concerning money, Karl Marx owes nothing to Ricardo. He was influenced by Tooke and the Banking school while he was very critical of the Currency school. Furthermore, Marx was fiercely opposed to Peel’s Act of 1844 which forbade notes unbacked by metallic money. Oddly enough however, Marx was criticizing fiduciary credit as being “fictitious capital” which seems to be in contradiction with his opposition to Peel’s Act.

We must keep in mind, however, that the main difference between Marx and other economists is that Marx was simply trying to describe how capitalism operates, with or without inflation. He was not saying that inflation will improve or destroy capitalism. In Marx’s view, capitalism is inevitably unstable and doomed. For him, workers must abolish capitalism and replace it with socialism, in which there are no problems of prices, inflation, crises, and unemployment.

Lenin, the Bolsheviks, and Inflation

The following quote is often attributed to Lenin: “The best way to destroy the Capitalist System is to debauch the currency.” This supposed statement has circulated widely among economists and the public. Hellwig remarked that: “It is almost a ritual, on the occasion of the required tributes to a stable monetary standard, to quote Lenin as a bogeyman.”1 The problem is that this quote has never been found in Lenin’s works. The first attribution of this statement was made by J.M. Keynes in his book The Economic Consequences of the Peace (1919). No one at the time challenged what Keynes was attributing to Lenin, and even today, this quote is still used by some sound-money advocates. However, Lenin's few remarks on monetary matters give the opposite impression from the remark attributed to him by Keynes. In September 1917, before the Bolsheviks overthrew the government in power, Lenin wrote an article on "The Threatening Catastrophe" where he speaks about money and banking. Of inflation he said:

Everybody recognizes that the issue of paper money is the worst kind of a compulsory loan, that it worsens the conditions principally of the workers, of the poorest section of the population, that it is the chief evil in the financial confusion. ... The unlimited issue of paper money encourages speculation, allows the capitalists to make millions, and places tremendous obstacles in the path of the much-needed expansion of production; for the dearth of materials, machines, etc., grows and progresses by leaps and bounds. How can matters be improved when the riches acquired by the rich are being concealed?

This paragraph could have been written by an Austrian economist, and it is known that the Marxist tradition is sometimes close to the Austrian analysis concerning business cycles (see Huerta de Soto’s Money, Bank Credit and Economic Cycles). Like Lenin, we believe that inflation can foster income inequality, hamper economic growth, impoverish the poor, and cause asset inflation.

However, once they were in power, the Bolsheviks were responsible for hyperinflation. In Socialism, Ludwig von Mises wrote:

The Bolshevists, with their inimitable gift for rationalizing their resentments and interpreting defeats as victories, have represented their financial policy as an effort to abolish Capitalism by destroying the institution of money.

Mises is right, but he forgot to say that political opportunism and not ideology was the reason why communists used inflation. Basically, for the communists, inflation is wrong when communists are not running things, but it is all right when they are in control. Professor E.H. Carr wrote:

None of the Bolsheviks wanted, or planned, inflation. But, when that happened (since the printing press was their main source of revenue) they rationalized it ex post facto by describing it as (a) death to the capitalists and (b) a foretaste of the moneyless Communist Society. Talk of this kind was widely current in Moscow in 1919 and 1920. ... Keynes in 1919 had no special knowledge of Lenin; everything that came out of Moscow was automatically attributed to Lenin or Trotsky, or both.