A Lease on the Environment 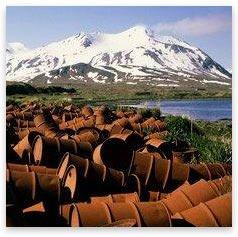 This common phrase among libertarians is often applied to redistribution. However, the political environmentalist movement  should adhere to these words perhaps closer than anyone.

Private property and markets are accused of being  unable to protect the environment. But how does the government role of caretaker work more efficiently?

The most common ways are to pass bills in Congress protecting certain areas with national parks, emission controls, and the preservation of particular species. This way of dealing with environmental problems is not only unsatisfactory but outright dangerous in the long term.

If these areas are protected, then why was there a vote a few years ago regarding oil drilling in ANWR (Arctic National Wildlife Refuge)? You would think that some environmentalists in the middle of banging their bongo drums would realize the inherent flaw in this system of protection.

Sadly, almost no one witnesses the problems at hand. In fact, the vote was generally celebrated throughout the environmental movement.

Having worked  with the Sierra Club for a short time, I remember this Congressional decision being one of the exalted victories of our side. Nobody noticed the oncoming doom and gloom still to come:

The environment in the United States does not stand a chance for long term preservation in its current direction. If a group of people can democratically decide what to do with the land you are trying to save, then the land is not protected. The reality is that the land "preserved" is actually just a lease from the government. The earth is "secure" until the whims of rulers find a better use  than appeasing a few disgruntled environmentalists voters.

Almost every American dreams of one day owning a home. It is time for Americans to own their environment. Our current environmental conservation situation is no better than that of public housing. You can reside in a public building until the government dictates that you have to leave or a new building project is in order. This happens all the time as condo buildings replace public housing, and oil drills replace virgin trees.

The focal point of the movement is based on the population's democratic decisions. This is an extremely precarious position in which to place the whole environment. Nothing is preserved — only rented.

A simple question for environmentalists using political action: "If the price of gas goes up to $5/gallon, what are you going to do in order to convince a voter making $8/hour at Wal-Mart to vote in favor of preserving caribou over drilling for oil?"

You can preserve millions of acres through political action and lose those same millions in the time that it takes to cast a few votes and shuffle papers around Congress.

Environmentalism is based entirely on thinking about the future of the planet. In the present, supporters do the exact opposite. Their policies are temporary patch jobs at best without consideration that the same country that voted for preservation this time can  change its mind. Political action conservationists showing the benefits of their lobbying are exercising a performative contradiction. They are attempting to solve the problems of the long term by only considering the short term.

These groups constantly claim that the world is running out of resources. Doomsday predictions of oil and lumber supply constantly pop up in our media. If this is true, prices will go up due to scarcity and increasing demand. The $5/gallon price is inevitable with the presented theory. The question that I posed earlier is an oncoming reality in one manifestation or another according to their views. The government representing citizens hungering for resources and profits will eagerly jump on the meticulously "protected" parks when it comes to a democratic vote in economic down turns.

Democracy is said to be two wolves and a sheep voting on what's for dinner. The wolves are the downtrodden citizens, and the sheep is the "safe" national park.

In the long run under such a system, slow doom is inevitable. There are too many booms and bust in the history of the economy providing an amplitude of good reasons for the federal government to exploit these parks for economic purposes.

Private property on the other hand is a far better long-term solution. Government laws and regulations come and go with time. A place like ANWR pristinely preserved for decades can at a drop of a hat be turned into an oil sludge fest. Property is an element of the United States that has stood the test of time. If your family owned land in 1820 and you still have the title, your family owns the land today.

A quick argument against is again of the two wolves and the sheep, the private property owner being the sheep. However, there is a huge difference here. In the previous example, only the sheep is concerned with protecting national forests. But the wolves have an interest in maintaining property rights as well.

An attack on property rights by seizing land is an attack not just on environmentalists but on anyone who owns land in some form, the average citizen. For this reason, property rights have been generally intact. Cases such as the  Kelo Decision are rare due to the outrage they bring.

Some individuals are very concerned about the environment. Every person is concerned with his or her property.

Even if you successfully elect a politician concerned about the environment, you run into problems. Voting is always a package deal. A voter may like candidate A on policies one, five, and seven but dislike the other policies. Hardly ever do we vote for the environment specifically. A candidate could be supporting the environment while also supporting labor unions or corporations that could threaten the environment.

A case in point is the Sierra Club. Many members of Sierra Club are against open immigration because they feel this would cause overpopulation in the United States leading to more environmental damage.1

This bill, which expanded ANWR, did two things. The bill promised to preserve 18 million more acres and to open 1.5 million acres for oil exploration. So once the citizens have miraculously found a congressman who is not part of the package deal system, the fundamentalist hippie politician runs into the same problem in Congress. How is he to vote? Obviously, he wants to preserve 18 million more acres, and obviously he doesn't want the oil drilling. What will his decision be? He has to vote for something bad in order to get something good.

Money in private institutions works far better. If you give money to buying land through a non-profit organization such as a land trust, the land will be protected forever. Your only threat is a society which turns against private property. Even if a dictator came to power and seized the land, he would surely go for the public land first. And at that point, your last concern would be how the squirrels are doing as you are waiting in a breadline.

The Land Trust Alliance is a group privately advocating the conservation of land. They are the true environmentalists in my opinion. Two quotes from their website say it all:

The first part means what it says by action. Hippie kids with dreadlocks holding signs in front of the White House are not doing anything for the environment. The individual himself can improve his environment through individual actions. This does not require votes or a majority.

The last few words "beyond their lifetimes" show perfect understanding of the commitment. This is not a lease on the environment. It is ownership. Ownership stands free of the shaky direction of the public. Ownership does not bend to democratic cries of the masses but obeys only the commitment to the environment made by the owner.

For a lasting, stable environment the ownership must be in the hands of those who value the planet most — directly through private property. The desires of politicians have little to nothing in common with the environment. We cannot entrust them to protect us and the environment.

Vedran Vuk is a student of Economics at Loyola University of New Orleans. Send him mail. See his articles. Comment on the blog.

I would like to thank Dr. David White (Ecology) and Dr. John Clark (Philosophy) at Loyola University of New Orleans for helping me through stimulating discussion formulate these ideas (even though they likely disagree with them).