Krugman Fails to "Get It" on Japan 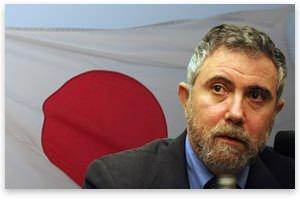 One of my pet peeves with Paul Krugman is his constant rewriting of history, a rewriting that just happens to coincide with left-wing political talking points. For example, we hear that the Great Depression occurred because Herbert Hoover was a staunch believer in laissez-faire and took the advice of Treasury Secretary Andrew Mellon, who called for liquidation of bad assets to "purge" the economy of whatever was "rotten" in the system.

However, even a cursory reading of the history demonstrates that Hoover openly rejected Mellon's advice and tried stimulus after stimulus, only to see the economy crumble. (Krugman's response is always the same: Hoover tried "too little, too late." So, whenever any so-called stimulus does not work, the standard Krugman-Keynesian response is that the stimulus was "too small.")

Thus, he takes issue with a paper by Alberto F. Alesina and Silvia Ardagna in which the authors claim that tax cuts, as opposed to increases in government spending, provide a better "stimulus" for a moribund economy.

Of course, the issue at hand ultimately is not "stimulus" at all; it is the presence of malinvestments, which must be liquidated in order for the economy to recover.

Krugman, however, goes on to criticize the paper on two points:

The Keynesians are here misled by their superficial treatment of the interest rate as simply the price of loan contracts. The crucial interest rate, as we have indicated, is the natural rate — the "profit spread" on the market. Since loans are simply a form of investment, the rate on loans is but a pale reflection of the natural rate.

Keep in mind that Keynesians hold that "real rates" don't mean much, just as Keynes advocated inflation to cut real wages as a means to increase employment. His response was to declare that workers are only interested "in their money wage." History tells us something different, does it not?

On the Japanese recession, Krugman differs with Alesina and Ardagna on the timing and forcefulness of the government's "stimulus" actions:

They use a statistical method to identify fiscal expansions — trying to identify large changes in the structural balance. But how well does that technique work? When I want to think about Japan, I go to the work of Adam Posen, who tells me that Japan's only really serious stimulus plan came in 1995. So I turn to the appendix table in Alesina/Ardagna, and find that 1995 isn't there — whereas 2005 and 2007, which I've never heard of as stimulus years, are.

However, as Doug French recently wrote, the Japanese government took a number of spending and interest-rate-cutting actions during the 1990s, none of which worked.

True to form, Krugman claimed several years ago that had Japan's government not engaged in such actions, the Japanese economy would have fallen into depression — this is another of the "Heads I win, tails you lose" propositions we often see from Krugman.

"Whenever any so-called stimulus does not work, the standard Krugman-Keynesian response is that the stimulus was 'too small'."

Interestingly, Krugman has always approached the Japanese recession as having come from Japan's high savings rate or simply out of nowhere. French, however, notes that Japan had a huge and unsustainable boom that turned into a stock and real-estate bubble, which in turn popped:

For a brief moment in 1990, the Japanese stock market was bigger than the US market. The Nikkei-225 reached a peak of 38,916 in December of 1989 with a price-earnings ratio of around 80 times. At the bubble's height, the capitalized value of the Tokyo Stock Exchange stood at 42 percent of the entire world's stock-market value and Japanese real estate accounted for half the value of all land on earth, while only representing less than 3 percent of the total area. In 1989 all of Japan's real estate was valued at US$24 trillion which was four times the value of all real estate in the United States, despite Japan having just half the population and 60 percent of US GDP.

Bubbles, as we have seen, result from deliberate "expansionary" policies by government authorities, yet Krugman always seems to treat them as being solely the products of private enterprise. It never occurs to him that the policies of high leverage and of gambling on inflated asset values would not happen systematically if government were not acting behind the scenes. Instead, he tells us that the only thing that can rescue a financial system is a new round of government regulations.