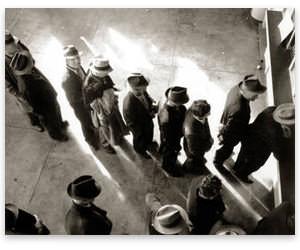 Just how bad is the current plague of economic fallacy?

SEACHANGE IS SET IN A HEALTH PLAN — House Democratic leaders took a big step toward guaranteeing health insurance for most Americans on Tuesday as they unveiled a bill that detailed how they would expand coverage, slow the growth of Medicare, raise taxes on high-income people and penalize employers who do not provide health benefits to their workers.

A BLEAKER PATH FOR WORKERS TO SLOG — In California and a handful of other states, one out of every five people who would like to be working full time is not now doing so. It is a startling sign of the pain that the Great Recession is inflicting, and it is largely missed by the official, oft-repeated statistics on unemployment.

It's sometimes said that economics is a difficult subject because it requires high-level, abstract thinking, and tracing of cause and effect through several logical steps. And yet, really, how hard can it be to see the contradiction in the above?

Here is the problem. Mandating benefits for employees imposes costs on employment. The would-be worker bears the cost. It makes the worker more expensive to hire. The employer has to pay not only a salary but also a benefit. If you make it more expensive to hire people, fewer people will be hired.

It is no different from eggs at the supermarket. If they are $2 each, you will purchase fewer of them — you will economize. This is nothing but the law of demand: consumers will demand less of a good at a higher price than of a good at a lower price. A salary plus benefits amounts to a price that the employer must pay to purchase the work of a laborer. At a higher price, less work will be purchased by the employer.

That means that requiring employers to provide health benefits to employees will make the present job situation worse, not better. It will intensify the current problem that people want to work more but are having a hard time getting employers to hire them.

The answer is the same in every recessionary environment. The price of labor must fall in order for the surplus of workers to be absorbed into the market. Raising the cost of hiring only further entrenches the problem and creates new forms of unemployment.

There is no real reason to prove these assertions empirically since they flow from the logic of economics. Nonetheless, Richard Vedder and Lowell Gallaway spent years accumulating evidence of the link between full employment and lower labor costs, on the one hand, and higher labor costs and unemployment on the other. What they reveal in their book Out of Work is that the entire problem (or nearly the entire problem) of unemployment can be explained through the issue of the costs of hiring and employing. In other words, there is no mystery here. Unemployment can be created or solved by the application of policies and laws.

In a free market, however, there is no unemployment that persists that isn't chosen by the workers themselves. That's because the price of labor is continually fluctuating based on supply and demand. Everyone who wants to work can work, simply because we live in a world in which there is always work to do. Only artificial interventions can generate the unemployment problem we have today.

Even so — and for reasons that are unknown and can only mystify the learned person — the Congress and the Obama administration keep trying to pretend as if reality doesn't exist. Here they are imaging that they can just order businesses to give everyone health care and then suddenly health care for all comes into being.

As with all programs, we have to ask: what is the cost? I don't mean what the cost adds up to in terms of government spending. I mean: what is the social cost of overpricing labor relative to what the market would bear? In this case, there is no way to know in advance, but we can know that fewer people will be hired than otherwise.

And then what happens? Business goes to government hoping for a subsidy or for fully socialized medicine as a way of sloughing off the costs on the whole of society instead of bearing them directly.

Sadly, there is no way that free health care can be granted to all living things with the stroke of a pen. Broadening availability will require that the entire sector be turned over to the private sector, so that it can be controlled through the price system like everything else.

As it is, the imposition of new penalties on business will make them less, not more, likely to hire people, which will thereby intensify the labor problem. It is like trying to cure a drug overdose with the injection of poison. New mandates on business are exactly what we do not need.

In other words, the whole idea is just plain dumb, not to mention incredibly ill-timed. The worst-possible time to be imposing new mandates on business of any sort is during a downturn. Make the mandates labor specific and you have a recipe for causing the unemployment rate to land in the double digits and go up from there, higher and higher until the entire economy shuts down.

Presumably, not even Congress and the president would benefit from this result.