GET NEWS AND ARTICLES IN YOUR INBOXPrint
A
A
Home | Mises Library | Jeffersonian or Hamiltonian? 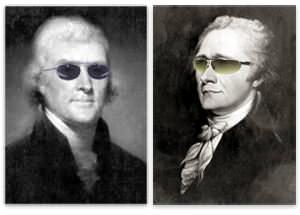 Jeffersonian or Hamiltonian? Every college student, indeed every literate person, is expected to choose up sides and pin a label on himself in the Great Debate. Most people today consider themselves as Jeffersonians. Groups as diverse as the States' Rights (or Dixiecrat) movement and the Communists consider themselves heirs to the Jeffersonian mantle. At one and the same time, conservative southerners refer to themselves as "Jeffersonian Democrats," while the leading revolutionary Marxist school in the country is called the "Jefferson School of Social Science." Amidst this welter of confusion, to find the true picture of Jefferson the man and political philosopher is an extraordinarily difficult task.

Analysis of Jefferson is made far more difficult by the complex nature of Jefferson's personality and career. A man of brilliant intellect; keenly interested in the whole range of human thought, from economics to architecture to scientific farming; active, dynamic, and spirited in an amazing multitude of enterprises, and moreover a political leader the greater part of his life, necessarily presents to posterity a bewildering mosaic. Politics itself is a day-to-day affair, imposing by its very nature on the politician a series of shifts and compromises. Thus, Jefferson combined within himself the qualities of a soaring intellectual spirit, searching for political principle, busy man of affairs, and political boss. When it is further remembered that Jefferson dominated the stage during the most vital years of the Republic (Revolution, Independence, Constitution, Growth, War, etc.), it becomes more understandable that so many contrasting groups can pick out of his immense record of writings and actions support for their own ideologies.

But to an unbiased observer who explores Thomas Jefferson, his principles stand out indelible and crystal clear. His political philosophy has been imbedded deep into the very soul of America, and has imprinted itself on the minds of innumerable Americans of later generations. His achievement has been sneered at by Hamiltonians of our day as well as his. Hamilton, they claim, was a constructive and practical man of action. He funded the national debt, reformed the administration of government, established a national bank, etc. Jefferson was a mere phrase-maker and scribbler. These "practical men" fail to grasp that the forces which generate the actions of men, and therefore human history, are, for good or bad, the ideas of men. It is ideas, political, economic, ethical, esthetic, religious, that have prime significance for human action in the present and over the centuries. It is ludicrous to claim that Hamilton's financial measures were of comparable importance to the Declaration of Independence or the Kentucky Resolutions.

The battle between Jefferson and Hamilton, however, is of very great significance, and precisely because it represented a clash between two fundamentally contrasting systems of political principle. Jefferson's political philosophy is summed up in the phrase: ''That government is best which governs least." It received its finest expression in our own Declaration of Independence: man is endowed by God with certain natural rights; "to secure these rights, governments are instituted among men, deriving their just powers from the consent of the governed," and when government becomes destructive of that end, the people have the right to change the form of government accordingly. Thus Jefferson, as John Locke had done a century before, drastically shifted the moral emphasis from the State to the individual. In the absolutist and feudal era from which the world was beginning to emerge, divine right settled only on the kings, the nobility; in short, the State and its rulers. To Jefferson, the divine rights were conferred on each and every individual, not on rulers of government.

What were these natural rights? The fundamental right, from which all others are deduced, is the right to life. Each individual has the moral right to live without coercive interference by others. To live, he must be free to work and acquire property, to "pursue happiness." In political terms, the one important natural right is self-defense; defense of one's life, liberty, and property from invasive attack. Government's function, then, is to use its power of force to prevent and combat attempts to use force in the society. If the Government extends its powers beyond this "cop-on-the-corner" function, it in itself becomes the greatest tyrant and plunderer of them all. Since the Government has virtual monopoly of force, its potentialities for evil are far greater than that of any other institution. The people must constantly keep their Government small and local, and even then must watch it with great vigilance lest it run amok. That is the great Jeffersonian lesson, and it is one that all Americans must begin to learn again.

From this basic cornerstone, the rest of the Jeffersonian edifice is easily deduced. It explains his passionate, lifelong adherence to States' Rights, his determined opposition to John Marshall in the latter's successful campaign to make the Constitution more elastic so as to permit wider extension of federal power, his very distrust of the Constitution itself and insistence upon incorporating a Bill of Rights.

Jefferson's position on foreign policy stemmed from the same source. He did not believe that our government, or any government, is equipped to remake the world by force to our own liking. He was frankly a whole-hearted patriot, whose natural love of the soil and his country was reinforced by the fact that America constituted the Great Experiment in Liberty. His foreign policy was expressed in this classic phrase: "Peace, commerce, and honest friendship with all nations — entangling alliances with none." Particularly marked was his perceptive distrust of the wily imperialism of Great Britain.

In the economic sphere, Jefferson was not anti-capitalist, as his enemies charged. He believed in genuine freedom of enterprise, unencumbered by government regulation or grants of monopoly privilege. His opposition to paper money and a central bank were based on profound insight into the then new science of economics. Jefferson's almost unknown writings on banking, money, and depressions demonstrate that he was head and shoulders over the allegedly "practical men" who opposed him. What has since been interpreted as anti-capitalist rhetoric was simply expression on Jefferson's part of a personal preference for the soil and a distaste for the life of the cities.

The importance of the Jefferson-Hamilton struggle has been unfortunately obscured. It is a struggle which, in one form or another, has continued to mark our country since its inception. Hamilton and the Federalists believed in ever-expanding power of the federal government, a myriad of governmental regulations, controls, and special privileges in economic life, the crushing of the states, and limiting the rights of the individual. Their ideal was the British model — a strong monarch ruling the country in behalf of the "general welfare"; failing the adoption of a monarch, a strong President to act as benevolent despot. In foreign affairs, the Federalists looked to the British Empire as friend and ally. Hamiltonian Federalism was, in the profoundest sense, un-American; it represented a conscious harking back to the imperial British mode, a retention of the typically European forms of strong central government and semi-socialist "planned economy."

Our Constitution was forged as a compromise between the Jefferson and Hamilton forces, with James Madison acting as the eternal tightrope-walker and fence-straddler between the two camps. The trappings, the rhetoric, the specific issues have changed, but the fundamental cleavage remains, unresolved, on the American scene.

This article was originally published as "Jefferson's Philosophy" in Faith & Freedom, March 1951.