Inflation Is Here, and It Is Going to Get Worse | Mises Institute
Skip to main content

GET NEWS AND ARTICLES IN YOUR INBOXPrint
A
A
Home | Mises Library | Inflation Is Here, and It Is Going to Get Worse

Inflation Is Here, and It Is Going to Get Worse 02/24/2011Frank Shostak
As compared to September last year, the growth momentum of price indexes shows visible strengthening. Year on year, the rate of growth of the consumer price index (CPI) rose to 1.6 percent in January from 1.5 percent in the month before and 1.1 percent in September last year. Also the growth momentum of the consumer price index less food and energy has strengthened in recent months. The yearly rate of growth climbed to 1 percent from 0.8 percent in December and 0.6 percent in October.
Economists blamed the increase in price indexes on the higher prices of apparel, airline fares, and shelter costs. Note that attempting to explain general increases in prices in terms of the components of the price index is not an explanation, because it doesn't address the key causes.

Is Inflation about Price Rises?

The fundamental problem here is a failure to define the problem properly. The essence of inflation is not a general rise in prices as such but an increase in the supply of money, which in turns sets in motion a general increase in the prices of goods and services.

As Mises explained in his essay "Inflation: An Unworkable Fiscal Policy," 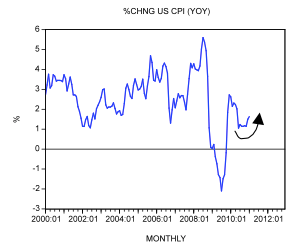 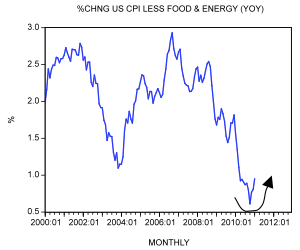 Inflation, as this term was always used everywhere and especially in this country, means increasing the quantity of money and bank notes in circulation and the quantity of bank deposits subject to check. But people today use the term "inflation" to refer to the phenomenon that is an inevitable consequence of inflation, that is, the tendency of all prices and wage rates to rise. The result of this deplorable confusion is that there is no term left to signify the cause of this rise in prices and wages. There is no longer any word available to signify the phenomenon that has been, up to now, called inflation. …

As you cannot talk about something that has no name, you cannot fight it. Those who pretend to fight inflation are in fact only fighting what is the inevitable consequence of inflation, rising prices. Their ventures are doomed to failure because they do not attack the root of the evil. They try to keep prices low while firmly committed to a policy of increasing the quantity of money that must necessarily make them soar. As long as this terminological confusion is not entirely wiped out, there cannot be any question of stopping inflation.

When inflation is seen as a general rise in prices, then anything that contributes to price increases is called inflationary. It is no longer the central bank and fractional-reserve banking that are the sources of inflation, but rather various other causes. In this framework, not only does the central bank have nothing to do with inflation, but, on the contrary, the bank is regarded as an inflation fighter.

Thus, a fall in unemployment or a rise in economic activity is seen as a potential inflationary trigger which therefore must be restrained by central-bank policies. Some other triggers, such as rises in commodity prices or workers' wages, are also regarded as potential threats and therefore must always be under the watchful eye of the central bank.

We suggest the Fed's massive pumping during 2008 to September 2009, and the consequent increase in the growth momentum of the money supply (AMS), is the key factor behind the present strengthening in price inflation. Observe that the yearly rate of growth of Fed's balance sheet stood at 153 percent in December 2008 whilst the yearly rate of growth of AMS jumped to 14.3 percent in August 2009.

The Popular Definition Cannot Explain Why Inflation Is Bad

Despite all these assertions regarding the side effects of inflation, mainstream economics doesn't tell us how all these bad effects are caused. Why should a general rise in prices hurt some groups of people and not others? Why should a general rise in prices weaken real economic growth? Or, how does inflation lead to the misallocation of resources? Moreover, if inflation is just a rise in prices, surely it is possible to offset its effects by adjusting everybody's incomes in the economy in accordance with this general price increase. 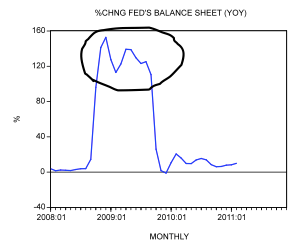 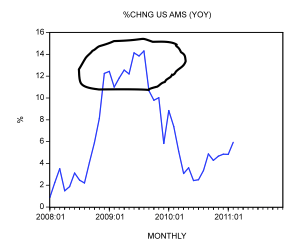 Contrary to popular thinking, the Fed's preoccupation with maintaining price stability by keeping the CPI rate increases at a particular acceptable range, such as 2 percent, can actually generate nasty surprises. For instance, as a result of strong monetary expansion and a correspondingly strong increase in the production of goods, prices remain stable. Notwithstanding this stability, various nasty side effects are likely to emanate from monetary expansion. Hence we suggest that Fed policy makers should pay close attention to the sources of monetary inflation rather than focusing on the symptoms of inflation.

The fact that general prices were more or less stable during the 1920s told most economists that there was no inflationary threat, and therefore the events of the Great Depression caught them completely unaware.

When money is injected into the economy, it never affects the prices of goods instantly. Because money moves from one market to another market there is a time lag. We have estimated that in the United States it takes about 36 months before changes in money supply generate a visible effect on the prices of goods in general. It must be emphasized that the lags are variable, i.e., in some periods the time lag could be less than 36 months, in some other times it could be more than 36 months. 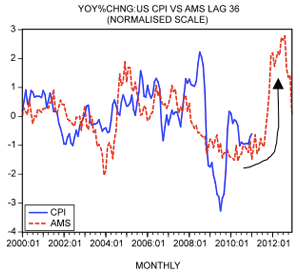 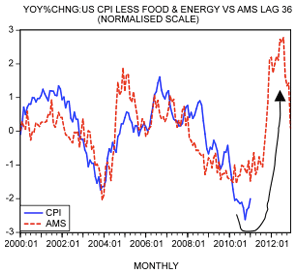 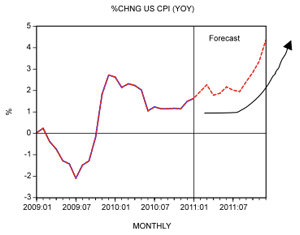 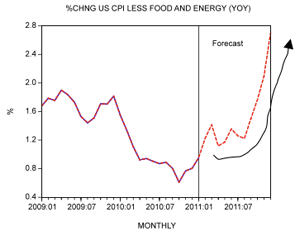