Inflation and the American Revolution 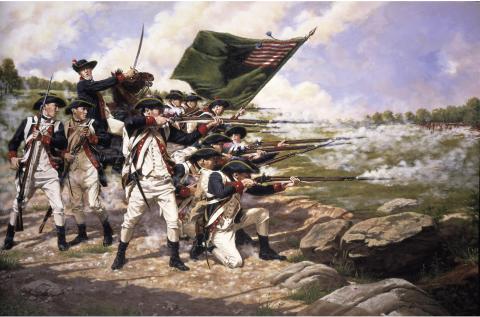 How odd that the tax bills of many American families would fall during a period of exorbitant increases in federal spending due mainly to war. But once we discover the record levels of government debt accumulation, perhaps it is not so odd. It's the shell game of government finance at work.

The bills must be paid, but how? The Bank Credit Analyst (July 9, 2003) said it best: "The only way to avoid a destructive end to the super-cycle of rising debt and illiquidity may be to try and devalue accumulated debts through increased inflation. That will not be a painless process for the markets."

It is not the first time that government warriors have turned to debt and the printing press to pay for their military ventures. Consider the founding generation. Next to the persecution of the Loyalists, the financing of the American War of Independence was the darkest blot on the history of that otherwise noble struggle. Regrettably, they set a precedent for inflationary war financing that was to be followed in every future American war except one (the Mexican War).

Along with Murray Rothbard, an excellent guide to the economic history of the Revolution and the War of Independence is William Graham Sumner, the historian, sociologist, and classical liberal. Sumner believed that even after they began fighting the British for their independence the Americans inherited three evils from the colonial period: slavery, mercantilism, and paper money. The last two would seriously weaken their war effort. The Americans should have relied upon a hard currency, regular taxation, and commercial freedom to pay and supply their army, navy, and militia forces. Instead, they turned to commercial warfare, paper money, and impressment. It was a disaster. After six years of war, the country suffered from hyperinflation, food shortages, ill-clothed soldiers, and a plundered citizenry.

When in May 1775, the Continental Congress began making preparations for war with Great Britain they resolved to issue paper money to pay for salaries and supplies. Taxation was not even considered, and the few who recommended it were ridiculed or ignored. Americans were rightly averse to any taxation, but war bills had to be paid somehow. They chose to finance the war through the printing of bills of credit (paper currency receivable for future taxes).

Sumner is very critical of their decision. In his view, since they had decided to resist the authority of Great Britain, they needed to "subject themselves to the necessary cost of it, in money and military effort, like men." Instead, Congress cranked up the printing press and called on the states to levy taxes to retire the bills. Congress could then issue a new batch of currency. The states, however, never laid the taxes. What was worse, they began issuing their own currency to match the Continental issues. The disastrous result was that all the bills stayed in circulation, Congress and the states continually printed more, and the whole mass depreciated to almost nothing in five years.

There is still debate among historians about when the paper currency began depreciating. Sumner concluded from his research that it was almost immediate. He cited a resolution of the Massachusetts Provincial Congress (28 June 1775) declaring that anyone who refused these notes or demanded a premium for them was an "enemy of the country." Discovering the extent of the early depreciation is difficult because for the first two years of the war it was considered a crime against patriotism to even admit that the Continental was sinking in value.

Nevertheless, the depreciation became marked and significant in the latter half of 1776. By December, the Continental dollar had sunk to 66% of a specie dollar. To combat the depreciation, the states made the paper currencies legal tender for all debts and purchases, enacted price controls, and printed more money. The states made it a crime to refuse paper money, demand a premium in paper, or charge lower prices for specie. Punishments included public humiliation, fines, imprisonment, and the forfeiture or confiscation of the goods or property concerned.

Local committees of public safety were the usual enforcement agency. In addition, delegates from the New England states met at the end of 1776 to set price ceilings for a wide range of goods and to enact wage controls as the high prices being paid for labor were said to be inhibiting military recruitment. Delegates from the middle states met in March 1777 to enact price and wage controls for their region. Although the price conventions never succeeded in holding down prices, they continued to meet every year through 1780. The states also passed laws forbidding "forestalling" and "engrossing," which were terms describing the practice of holding large stocks of foodstuffs or goods but refusing to sell them at the set price in paper money.

In this way, countless farmers and merchants were robbed of their property. Many of the latter were men who had had the foresight to purchase and accumulate such goods as would be needed in larger quantities during the war. The effect was "to prevent the importation of those supplies which were indispensable for an armed resistance to Great Britain." In addition, farmers who lived in or near war zones stopped growing more crops than were needed to support the family. Even free speech suffered. In August 1777, the Connecticut Assembly ordered the suppression of a pamphlet titled Discourse upon Extortion protesting such coercive measures.

By 1778, army procurement officers, both state and federal, resorted to "impressing" (i.e. seizing) whatever supplies or goods they needed, giving "certificates" of debt in return, the market value of which quickly plummeted. The impressment policy both exasperated and antagonized the people who were harmed by it. Farmers dismantled wagons, hid horses, drove livestock hundreds of miles, in some cases over the Appalachian and Alleghany mountains, all to avoid their being confiscated in forced sales by government officials. They were many cases of owners sneaking back into army lines to get back their property.

In March 1780, Congress recognized that printing more currency would be fruitless. In five years, they had issued $241 million continental paper dollars, the states had issued $209 million of their own notes, but millions more of each had been counterfeited by private individuals as well as the British. Congress called on the states to retire the Continentals by levying taxes payable in either paper or specie. If one preferred the latter, one silver dollar would pay $40 in taxes. Over the next year, the states would retire $120 million continentals. They also levied taxes to collect their own worthless currencies. The experiment of fiat paper was over.

Many revolutionary leaders continued to defend the necessity and the utility of the continental currency. Franklin termed it a "wonderful machine" that paid and supplied the army, paid itself off by depreciation, and functioned as an equitable tax. John Adams blamed the public for the extent of the depreciation. In his view, avarice, selfishness, and a lack of patriotism caused its value to plummet.

Sumner said of such justifications and rationalizations that "nothing could be more childish."  Rather than helping win the war, "it produced a social palsy. The effect of an excessive inflation of the currency is the same as having no currency at all; for the channels of circulation are entirely clogged, and all real money is held at a distance. A return to barter is therefore enforced. So much for commerce; but in respect to the State which issues the paper, there is no resource to be reached except by violent seizure, forced loans, and impressments. The national resources are therefore removed beyond the reach of the government, except by action which destroys the good will of the people."

All of this happened. A contemporary economist, Pelatiah Webster, wrote of the injustice caused to defrauded creditors, plundered merchants and farmers, impoverished people who had lived on fixed rents and annuities:  "If it saved the State, it has also polluted the equity of our laws, turned them into engines of oppression and wrong, corrupted the justice of our public administration, destroyed the fortunes of thousands who had most confidence in it, enervated the trade, husbandry and manufactures of our country, and went far to destroy the morality of our people."

Even as they retired the Continentals, neither Congress nor the states were ready to forego using paper currency. For the remainder of the war, Congress would continue to rely on it to pay the troops and supply the army and navy. They simply learned to be more sparing in its issue and to maintain some link, however tenuous, to gold and silver. In 1780, Congress issued $4.5 million in a new interest-bearing currency, redeemable in coin after five years, and receivable for taxes. It too depreciated rapidly after being paid out. In 1781, Congress chartered a fractional-reserve bank, the Bank of North America, the declared purpose of which was to lend funds to the government, and furnish the country with a stable paper currency.

Because the notes were redeemable in specie only at the Philadelphia bank, they depreciated everywhere else. In addition, the new Superintendent of Finance, Robert Morris, issued treasury notes, known as "Morris notes," which promised to be redeemable in hard currency at the treasury department at a future date designated on the note. They too depreciated. By means of these three forms of credit currency, Congress purchased supplies, paid the troops, and met interest on its debts. The army, however, continued to give certificates for impressed goods.

The Americans could have adopted a hard currency after 1779, for specie was pouring into the country from the Havana trade, French loans, and the disbursements of English and French troops. What is more, large sums remained in hoards. However, because of Gresham's Law none of it remained in circulation; it flowed back out to purchase imports, and the country was left with no domestic currency except depreciated paper.

The lesson is that only one of many great tragedies of war is that it must be paid for, and it is often paid in the only way the political class can get away with: surreptitiously, by stealing it from the purchasing power of money, often at the additional cost of liberty itself.

Murray Rothbard, A History of Money and Banking in the United States (Mises Institute, 2002).

Historian Scott Trask was an adjunct scholar of the Mises Institute.