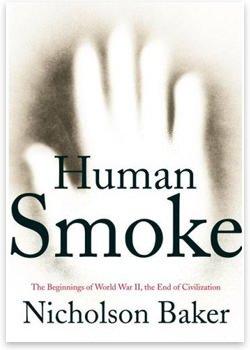 The neoconservatives are already in hot pursuit of Human Smoke. In the March 2008 issue of Commentary, David Pryce-Jones called it a "mendacious book." From this review, one might have thought that Nicholson Baker had written a defense of the Third Reich and its Führer. Quite the contrary: no one who reads the book can suspect Baker of the slightest sympathy for Hitler, whose evil deeds receive copious coverage in the book.

Where, then, lies Baker's offense? Rather than write a standard historical narrative, he presents on each page a separate fact, often taken from contemporary newspaper accounts. A number of these facts show Winston Churchill and Franklin Roosevelt in less than a favorable light, and this has proved too much not only for Pryce-Jones but for John Lukacs as well. For Lukacs and his ilk, Churchill is the Schwannritter of the 20th century, and inconvenient truths must not be permitted to jar unwary readers from the veneration properly his due.

However reasonable one may think the Allied cause in World War II, even a just war must be fought in accord with the demands of morality. Direct attacks on noncombatants are strictly forbidden.

The policies pursued by Churchill could not be further from this clear demand of jus in bello. As First Lord of the Admiralty in World War I, he supervised the British hunger blockade of Germany. By endeavoring to starve the German population, Churchill hoped to undermine the German war machine from within.

"The British blockade," Churchill later wrote, "treated the whole of Germany as if it were a beleaguered fortress, and avowedly sought to starve the whole population — men, women, and children, old and young, wounded and sound — into submission." (p. 2)

The armistice of November 11, 1918 did not bring the blockade to an end. Churchill continued it until the Germans signed the Treaty of Versailles in 1919. He said on March 3, 1919,

"We are enforcing the blockade with rigour… It is repugnant to the British nation to use this weapon of starvation, which falls mainly on the women and children, upon the old and the weak and the poor, after all the fighting has stopped, one moment longer than is necessary to secure the just terms for which we have fought." (pp. 5–6)

Such inhumanity has not even the excuse of military necessity. Had the Germans refused to sign, they would have been helpless against an English and French attempt to compel them to do so.

Baker does not mention this, but the young generation that grew up under these dire conditions had a strong affinity for Nazism. The UCLA historian Peter Loewenberg, in his important article, "Psychohistorical Origins of the Nazi Youth Cohort" (American Historical Review, December 1971, pp. 1457–1502) has documented this to the hilt. Churchill's policy thus helped to bring about the Nazi regime he later determined to destroy. (Unfortunately, Loewenberg characteristically includes in the piece substantial psychobabble as well, but the interested reader can readily disregard it). 1

Churchill might have said of the laws of war what Jonathan Swift said of promises, that, along with piecrust, they are "made to be broken." Baker points out that in The Aftermath, published in 1929, Churchill said that had Germany not capitulated in 1918, a massive campaign against the German people would have brought the war to an end.

But what had happened was nothing compared to what would have happened if the Germans had kept fighting into 1919, he [Churchill] said. Poison gases of "incredible malignity" would have ended all resistance. "Thousands of aeroplanes would have shattered their cities." (p. 17)

Given this sorry record, it is hardly surprising that the renewed outbreak of world war in September 1939, which returned Churchill to the British cabinet as First Lord of the Admiralty, brought a new hunger blockade of Germany. Herbert Hoover strongly protested: was it really an acceptable tactic of war to starve innocent women and children? Churchill was unmoved and retained the blockade in place.

In one respect, Churchill was able to improve on his stellar reputation for ferocity. In the previous war, bombers had not been used in a terror campaign against civilians. Military theorists after the war such as the Italian Giulio Douhet (not mentioned in Human Smoke) foresaw that the next war would be characterized decisively by mass bombings. Churchill was an ardent proponent of this view, and when he became prime minister he immediately instituted a policy of civilian bombing. Baker aptly cites the British Air Ministry official James Spaight as acknowledging that England, not Germany, began this grossly immoral policy, memorably condemned during the war by the courageous Bishop George Bell.

(The attack on bombing probably cost Bell his chance to succeed William Temple as Archbishop of Canterbury. 2)

Baker's last entry in the book is December 31, 1941, when the bombing campaign had yet to reach the savagery of the Hamburg and Dresden raids; but the essence of the policy was already in place.

Churchill was far from the only advocate of mass bombing: the policy unfortunately had wide popular appeal. Baker quotes in this connection some bloodthirsty remarks by the leftist British Hispanist Gerald Brenan: "'Every German woman and child killed is a contribution to the future safety and happiness of Europe,' Brenan wrote" (p. 349). 3

Franklin Roosevelt rivaled his British counterpart in his disregard for the rules of civilized warfare. Long before the Japanese attack on Pearl Harbor on that "date which will live in infamy," December 7, 1941, Roosevelt hoped that the Chinese would bomb the major cities of Japan. Because of the presence of closely packed together wooden buildings, entire cities could readily be set afire. Of course, American bombing raids on Tokyo later showed that Roosevelt was perfectly accurate in his expectations of the dire results of such bombings.

Baker rightly stresses that Roosevelt was anxious for confrontation with the Japanese. Roosevelt's stationing of the Pacific Fleet at Pearl Harbor was intended to provoke them, and the commander-in-chief of the Pacific Fleet, Admiral James O. Richardson, protested against this on several occasions. Roosevelt eventually responded by relieving Richardson of his post. 4

The moral offenses of Churchill and Roosevelt were not confined to violations of the laws of war. From the time of Hitler's onset to power, January 30, 1933, it was clear that the Nazis viewed the Jews as their inveterate enemies. Hitler wished to expel them from Germany, and those willing to emigrate were actively encouraged to do so. Those who remained found their situation increasingly precarious.

Roosevelt did virtually nothing to help. He refused to exert pressure to relax the rigid American immigration quotas in order to permit Jews to find refuge from the Reich. It may be said in his defense that the national origins quota system was at that time very popular, and had Roosevelt sought to change it, he would have risked political suicide. But he did not entertain such obvious alternatives as allowing temporary residence, without the possibility of future American citizenship. Neither did he show much interest in efforts to settle the Jews elsewhere. Churchill, despite his frequently expressed sympathy for Jews and Zionism, was little better.

Matters worsened after the Kristallnacht pogrom of November 1938. Hitler made clear in his January 1939 address to the Reichstag that if a European war broke out, he contemplated drastic action against the Jews.

Given these grim circumstances, was it not a clear moral imperative to avoid the outbreak of war and, if possible, to secure the evacuation of the Jews from parts of Europe likely to fall under German control? Further, once war broke out, was it not imperative to end the war as soon as possible?

Churchill rejected all efforts to reach a settlement. He continued the hunger blockade, a move that could only exacerbate the most extreme Nazi policies. Once more Herbert Hoover protested, pointing out that the blockade placed the children of Warsaw in peril of starvation.

In Warsaw, Hoover said, the death rate among children was ten times the birth rate, and corpses lay in the street… "Is the Allied cause any further advanced today as a consequence of this starvation of children?" Hoover asked. (p. 411)

Churchill of course turned a deaf ear: no humanitarian considerations could divert him from the life-and-death struggle he had determined to wage with the Nazi foe.

Defenders of Churchill such as Lukacs argue that he had no choice. Hitler was intent on the mastery of Europe; and had war not been declared in 1939, or had Hitler's 1940 peace offers been accepted, Britain would soon have had to fight from a weaker position or else accept total German supremacy. Baker does not address the question of Hitler's aims, though he makes clear his own sympathies with such pacifists as Rufus Jones and Jeanette Rankin. As mentioned before, Human Smoke is a chronicle of significant events rather than a historical argument, and readers in search of an analysis of German policy must go elsewhere. 5 One would like to think, though, that in view of the appalling massacres and destruction of the war, some better choices than the ones Churchill and Roosevelt made were possible.