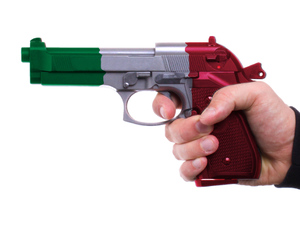 Beyond nice wines, warm beaches, and sultry women, Italy is well-known for something less savory — the mafia. It is interesting to understand how such a powerful “machine” managed to enter society in such a strong and meaningful way, but more importantly to grasp its role alongside the central government of Italy. On the one hand, it is easy to state that the mafia and the corrupt economic system it functions within are wrong and unproductive for the country. On the other hand its presence may be of help to a country’s economy, something that is especially true in the case of Italy.

In order to understand how corruption infiltrated the highest echelons of Italian society, it is essential to understand the progression of Italy throughout the twentieth century, both politically and economically.

The growing strength of crime organizations such as the “Sicilian mafia,” the “Camorra” (located in the Naples region), and the “Ndrangheta” (from the region of Calabria) have been noted for their relations with the construction industry, typically through a direct channel with the Italian government. These “associations” have grown enormously over the past fifty years creating empires that are clearly visible throughout the major sectors of the economy.

The Italian State: A Reliable Partner for the Mafia

This growth was fueled by the political and economic model present in Italy during the second half of the twentieth century following the Second World War. One major political party (Democrazia Cristiana) ruled the country for almost forty years. The reason for this very partisan approach to politics was the opposition to a strong and growing Communist Party (the largest in Western Europe during the 70s and 80s) that was seen as a major threat as most people feared they were going to be taken over by a Soviet-style central government. This feeling was especially endemic during the height of the Cold War. This period of Italian politics was dominated by one ruling political party and fostered engrained political-business connections that fueled the growth of organized crime.

This latter point in particular was less costly as belligerents were assured that the necessary authorities that needed to be “paid off” to look the other way would remain the same for an extended period. Coupled with a desire to supply goods that were either rationed after the war or taxed heavily (such as cigarettes), the mafia was an outgrowth of the desires of consumers coupled with weak governance structures. The resultant corruption restructured Italy’s economy almost completely.

As was the case during the nineteenth century, these corrupt associations were found in the southern regions of Italy. With the strengthening of this direct channel with the central government the mafia´s rapid growth moved north to more industrialized and much more strongly developed areas of Italy. What was once a contained problem has now entered all major industrial sectors by forming an intricate web between business and politics. (Dwight Eisenhower´s Italian counterpart would likely have warned of this “industrial-political” complex.) Organized crime has spread like a form of cancer that has become untreatable and has progressed to the stage where its removal would likely imperil the already shaky economy. In short, even if the surgery were a complete success, the patient would likely die.

The fact that corruption has been deeply rooted within Italy’s political, social and economic structures makes it even more challenging to perform its obligations within the European Union. It will be very challenging for Italy to exit the recession it is facing with such a corrupt and unhealthy system it possesses. Public debt is currently over 130 percent of Italian GDP. One obligation to remain a part of the Eurozone is to keep public debt under 60 percent of GDP, and the annual public deficit under 3 percent of GDP. Italy is nowhere near fulfilling either of these criteria (though, in its defense, few European countries are). One reason for the difficulty in getting public finances in order is the engrained political-economic order. This is a similar problem to America´s own difficulties in making necessary budget cuts to its own warfare-welfare economy. Too many entrenched interests make balancing the budget all but impossible.

In Italy the problem is accentuated because the relevant parties are inside the government itself. In America, public finances are a shambles mostly because voters don´t want to give up entitlements, or hold politicians accountable for boondoggles spiraling out of control (e.g., the War on Terror, the War on Drugs, etc.). In Italy it is the same politicians drafting the budget who directly use these funds to the benefit of themselves and the people who surround them.

Italy’s economic instability is not only destroying its economy from the inside, but also from the outside. Investors coming from abroad (e.g., other Europeans, Americans, Arabs, Chinese, etc.) do not want to cope with or run afoul of such a corrupt system. This creates instability that is quite visible because there is no real possibility of growth within the country due to government mismanagement and a lack of foreign investment. Italy only managed to attract 1.4 percent of its GDP in foreign direct investment last year, far less than the European average of 3.3 percent.

The Lega Nord party recently proposed that the more productive and prosperous northern regions should separate from the poorer and more stagnant southern regions. The southern regions are where the mafias are most heavily concentrated, however, corruption is country wide. Exiting the euro (another popular proposal) would be rather difficult due to the complexity of the problem, though more to the point, it would be damaging to the country even if successful.

The fact of the matter is that Italy needs the help of Europe. One of the only forces keeping further widespread corruption in check is that it is somewhat “regulated” by a larger system: the European Union. The Stability and Growth Pact that should keep government finances better balanced does create pressures on the Italian government to conform. Throughout the 1970s and ´80s, this unwholesome business-political system had managed to turn Italy into the most heavily indebted country in Europe. External pressure from the EU forced Italian public finances on a more sustainable trajectory. (Between the advent of the euro and the dawn of the financial crisis, Italian government debt to GDP had fallen by a fifth; annual inflation which averaged more than 10 percent during the 1970s and ´80s has been below 3 percent since 2000.)

Aiding this process was the birth of the common currency in 2002. Unable to print new lire to satisfy its spendthrift ways, the Italian government (much like the other inflationary periphery countries) was forced to be held accountable by its tax payers. The ECB may not have shown the most restraint over the past six years, but compared to the central banks of Southern Europe it replaced, it has been a veritable enforcer of a gold standard.

Italy is between a rock and a hard place. The mafia-dominated corruption that entangles the country is so deeply rooted that it is all but impossible to reform (or preferably eliminate). Such reform could today only come about by eliminating the central government. The system that exists today was the result of unchecked political power for an extended period of forty years. (Strangely, this outcome was in response to the fear of unchecked political power in the form of communism.) If this undesirable system cannot be changed, Italians will have to change the one thing they can — where they live. Young Italians, especially skilled and ambitious Italians, have been leaving their beloved country in droves, a trend magnified since the recession began. Leaving their homeland may be a small price to pay to ensure that the failing system in place today dies off so that a better Italy can rise from its ashes.