How the Experts Are Wrecking Healthcare 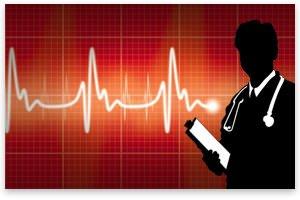 A few weeks ago the main story featured on my hospital's homepage was a university-wide lecture called "A Roadmap to Creating a Real Healthcare System." I had to laugh — central planning and the economics of bureaucracy are always amusing.

Over the years of my medical training I have become accustomed to this sort of hubris displayed by the head of some department or, better yet, a renowned "expert" in the field of health policy. The theme is always the same; America's healthcare system is broken due to market failure that was inevitably the result of waste, fraud, abuse, profit seeking, medical innovation, etc. The solutions are always predictable; government must apply more coercion here, a little price fixing there, subsidize this better, restrict that more, and, well, you get the picture.

It brings to mind the classic quotation from Friedrich Hölderlin: "What has always made the state a hell on earth has been precisely that man has tried to make it his heaven."

There are a multitude of reasons why government planning always fails. These reasons include, but are not limited to, the denial of consumer sovereignty, the ineptitude of central planners and their inability to account for the actions of millions of individuals living in different situations and responding to different incentives, and the willingness of policymakers to sacrifice honesty and prudence for expedience and power.

Hayek's The Road to Serfdom provided my introduction to the Austrian School and I have since tried to immerse myself in his work as much as possible — if only our supposed "experts" would do the same. Not that this is likely to occur; it is not in the best interest of our experts to learn how free markets work and government-planned institutions fail, unless they want to put themselves out of a job.

Drawing from Hayek's analysis and my own personal experience I have determined that the way to become an expert is as follows: don't challenge the prevailing orthodoxy of the institution; learn the history, underlying principles, and the inner workings of the institution; regurgitate the orthodoxy as you've been taught — it's best if you can do this in some sort of thesis paper; and finally, write a book, get yourself on CSPAN, and, if you're lucky, get appointed to a presidential committee.

I would also add that when giving talks to nonexperts, you should recite a healthy amount of snarky quotes. Here are a few good ones I have heard over the years that specifically apply to healthcare: "America's healthcare system is neither healthy, caring, nor a system," said by Walter Cronkite; "In this insanity of economics of healthcare, the patient always loses," said by Peter Van Etten; and here's one final quote that can be passed off as one's own because the author is anonymous, "Our current national healthcare system is simple: don't get sick."

But most importantly I have concluded, when presenting your unbiased, expert opinion, never, ever, in a million years, even remotely entertain the notion that it is the institution and the expert planners that are to blame — unless they are being blamed for not making the institution powerful enough.

The expert never admits defeat; he simply doubles down on government coercion; if central planning hasn't worked it's because not enough has been applied.

In America, the delivery of medical goods and services existed in a relatively free market until the creation of the government insurance programs Medicare and Medicaid in the mid 1960s. Prior to this, several attempts were made to nationalize the healthcare system but were resisted by physician groups, most notably the American Medical Association (AMA), which argued that such attempts were socialistic and would interfere with physician autonomy and the doctor-patient relationship. At this time, voluntary participation in private medical insurance plans was rapidly expanding (see figure 1). 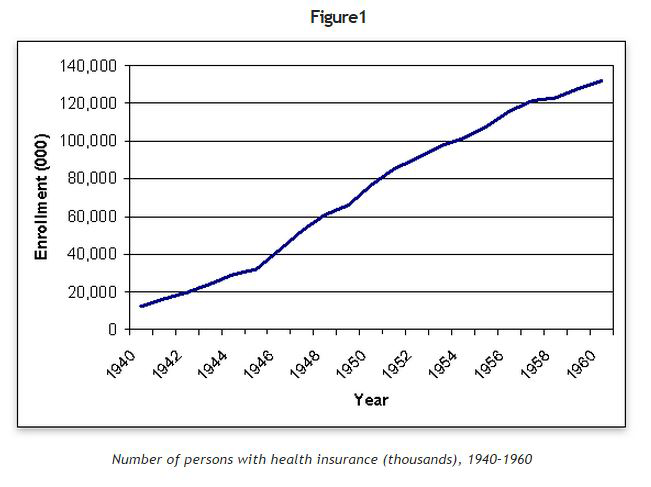 By 1960, nearly 75 percent of Americans had some form of private health-insurance coverage and the numbers were continuing to advance. These plans generally adhered to a rational insurance model that protected participants from the financial risk posed by catastrophic events that could not be reasonably planned for. Otherwise, individuals paid for the majority of medical services out of pocket, and the costs of those services remained affordable.

Then, along came the big two government insurance programs that provided subsidized healthcare services to millions of Americans (see figure 2). As one can appreciate from the figure, government insurance, as it was intended to, effectively minimized the role of the patient as consumer. As government spending increased, out-of-pocket spending by patients fell in a nearly perfect inverse relationship. 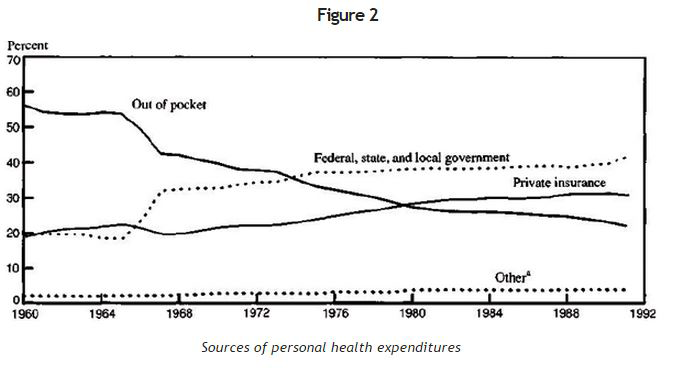 These new forms of government insurance caused severe distortions in the medical marketplace and, consequently, healthcare costs began to spiral out of control (see figure 3). Predictably, this led the experts to advance new regulations and restrictions and to apply new formulas to control costs. But, unfortunately, as our experts refuse to acknowledge, there is no rational way to evaluate cost effectiveness outside of the free market. 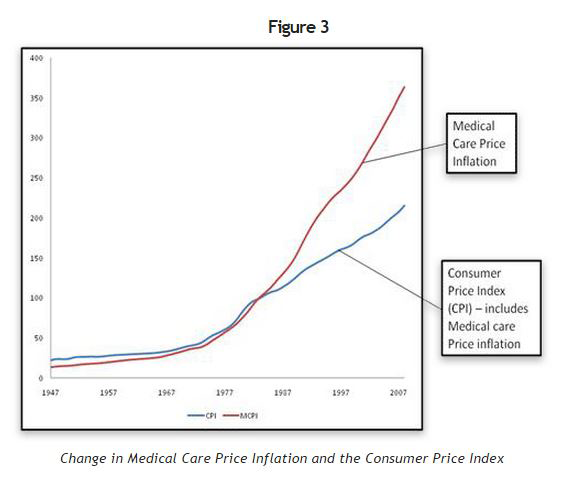 rely on cost reports submitted by providers. This cost data is then pushed through mathematical models and additional data generated by government, such as inflation and regional-labor-cost modifiers, to unilaterally (or in agreement with lobbyists and industry groups) determine what the prices for services should be.

And as anybody who has worked in the healthcare profession for several decades knows, these reimbursement mechanisms have been repeatedly modified in fruitless attempts to resolve their deficiencies.

In regard to health outcomes, what have these expertly designed programs done for us? In a review of the literature, Levy and Meltzer identified three high-quality studies examining the Medicare population and the effect Medicare had on health outcomes. They found that "Medicare increases consumption of medical care and may modestly improve self-reported health but has no effect on mortality."

Finkelstein and McKnight used data from the 1960s to see whether geographic areas with lower insurance coverage rates prior to the enactment of Medicare experienced improvements in mortality following the enactment of Medicare relative to areas with higher pre-1965 coverage rates. They found that while hospital utilization and spending increased significantly, "In its first 10 years, the establishment of universal health insurance for the elderly had no discernible impact on their mortality."

The data regarding the Medicaid population is similarly abysmal. The bottom line regarding these expertly designed programs is that they have done tremendous damage to the medical marketplace, and the minor benefits they bestow on target populations could have probably occurred in their absence given the direction of developments in private medical insurance prior to their passage. But here is the best part: in 1965 the government estimated that in 1990 Medicare expenses would total $12 billion; instead actual spending turned out be $110 billion — a 1,200 percent increase!

It seems clear to me that now, at a time when health-insurance premiums are rising 85 percent faster than workers' salaries, and federal healthcare spending is projected to double over the next decade, we don't need more government programs, restrictions, and subsidies but rather a massive deregulation and privatization of America's healthcare industry. But then again, I'm no expert.

Andrew Foy is cardiology fellow at Penn State-Hershey University Medical Center. The opinions expressed here are his own and are not intended to represent those of his employer.