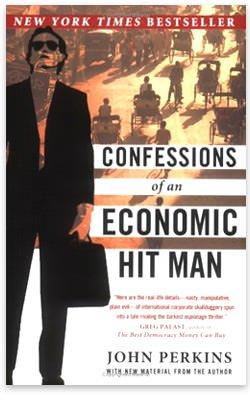 There seems to be two popular paths to wealth in the private sector today. The first is tried and true method: you try to anticipate consumers' needs, and then risk your capital trying to satisfy them. Successful entrepreneurs anticipate and satisfy correctly, while the unsuccessful ones don't.

The second is more nefarious. With this method, you work in an industry that stands to make billions of dollars through contracts for infrastructure development with foreign governments. Since these countries are often quite poor, the key to success is in getting World Bank and IMF loans into the coffers of these foreign governments, who will then spend them on your firm.

This method, shall we say, has its problems because, foreign governments often cannot repay the billions of dollars in debt that they incur to finance the project that your firm provides. Another is that it is fueled by involuntary exchange, either on the part of US taxpayers whose incomes are conscripted in order to fund those World Bank and IMF loans, or on the part of citizens of the foreign governments, who become saddled with debts that they never signed on for.

This second method for amassing wealth is the focus of John Perkins's fascinating, if problematic book, Confessions of an Economic Hit Man. In it, Perkins describes his role as an economic consultant — an econometrician who would visit various developing countries to produce estimates of the economic effects of infrastructure projects that would be used to justify the international development loans that funded them.

Perkins called his job that of an economic hit man — the person who makes the initial case for the infrastructure development with such optimistic (and purposely misleading) biases that they become deals that cannot be refused. So if a US-based firm wants to provide electricity to Indonesia or to extract oil from Ecuador, the "economic hit men" (EHMs) are among the first to arrive and construct the case for the massive loans necessary to fund the projects.

According to Perkins, the EHMs are simply the first level of interaction with the foreign leaders, who often stand to benefit personally and politically if they go along with the deal that the EHMs offer them. But occasionally they don't go along, which often necessitates the intervention of "jackals" to remove non-cooperating leaders. And if this doesn't work, well, how many times have US military forces been deployed to non-threatening countries in the fringes of empire?

What is fascinating about Confessions is the knowledge that there is much truth to the world Perkins describes. Anyone who has observed the off-stage crusades of the rock singer Bono in recent years knows that there are many poor countries that have gotten into serious, burdensome debt — debt that no private financing operation would have allowed but that was found to be a worthy risk for the World Bank. We know of companies that would be shells of their present selves were it not for their hounding of contracts funded by such loans, and that these companies provide lucrative incomes to politicians when they are out of office. (In fact, such companies are an important part of the local economy where I live.)

We also know that bad things can happen to foreign leaders who refuse the deals offered by the EHMs. Perkins volunteers Mossadegh in Iran, Roldós in Ecuador, Torrijos in Panama, and even Chávez in Venezuela as cases in which jackals were sent in to remove the noncompliant. And when the jackals are not successful, the US military often follows, whether in Panama, Bosnia, Afghanistan, or Iraq, for example.

Or at least that is the gist of Perkins's story, and any student of the modern warfare state, or of the causes of the costly blowback against the US government in recent years, must conclude that there is some element of truth to it. This alone makes his book recommendable. However, as I wrote earlier in this essay, Confessions is a problematic book as well. While its basic thesis would appeal to libertarians and small-government conservatives troubled by a growing US empire that reduces freedom at home, Perkins's biases are essentially left-liberal. As a result, he often confuses (what he calls) the "corporatocracy" — the teaming of the feds and select private sector firms to advance political hegemony and economic rent — with capitalism itself.

Perkins's primary problem is in assuming that all global capitalism is sinister in the sense described in his book. Any creation of wealth that depends on coercion can hardly be considered market capitalism. It truly is sinister when a US firm, funded indirectly by taxpayer dollars, forces indigenous people offs their land in South America because geological tests suggest that oil deposits there surpass those of the Middle East. It is sinister because it violates the property rights of both the taxpayers who fund the politically well-connected firms and of the displaced peoples and cultures whose property rights are violated when they are removed from their land (often with much suffering).

But Perkins's anticapitalism really shows when he equates such activity with (say) the opening of a Nike plant a third world country. No one dies, and no cultures are killed off, when a factory opens and workers living near it can voluntarily sell their labor for wages that (economic theory tells us) exceed their next-best opportunity for work.

In developing countries, a new Nike plant is a godsend, not only because it increases capital flows to a region, but because it means that families can become autonomous, or that daughters do not have to resort to prostitution to put food on the table.

In this sense, it is perverse to assume that a Wal-Mart in China or a McDonald's in South Korea is analogous to a Bechtel in India or a Halliburton in Iraq.

Perkins's biases also show when he assumes that the West stays rich because poor countries are kept poor. This zero-sum thinking ignores those factors that cause wealth to become created in the first place. The America of the Founding Fathers — whose anti-imperial instincts Perkins rightly lauds throughout Confessions — didn't depend on international development loans or the expansion of social welfare programs to fuel the industrial revolution, but on the protection of property rights, which then rewarded saving and attracted capital. For that reason, it is no coincidence that poor countries that eschewed such loans and nurtured property rights institutions 20 years ago are those that are quickly joining the wealthy countries of today.

But since not all confessions are perfect, I recommend Confessions of an Economic Hit Man. We live in an age when the federal state is deified, with its own liturgies, shrines, holy days, and leaders who are treated like an anointed class. For someone to write a book that reminds us that it has become little more than a purveyor of global welfare and warfare is more than a little plucky, and deserves attention.