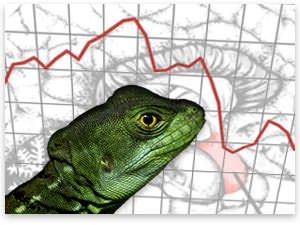 What everyone who pays attention already knows hit the front page the other day: Social Security will exhaust its reserves by 2033. That's 3 years sooner than previously projected, and, most importantly, a scant 21 years away for those hoping to retrieve some of what they put in over the years.

The Social Security Administration is kind enough to send out fliers occasionally letting us know how much of a monthly check we can expect from the program we pay into all of our working lives, depending on what age we decide to hang it up. Of course the folks at Social Security make no promises about how far a dollar will go when the time comes. And the present news would seem to cast some doubt as to whether any checks will be coming at all.

The trustees who oversee Social Security's two trust funds — one for disability benefits, the other for retirees — said reserves for the fund that pays disability benefits would be exhausted by 2016, two years earlier than projected last year. And if the disability fund were combined with the larger fund that pays retiree benefits, all reserves would be exhausted by 2033, three years sooner than projected last year.

This makes it sound like there are actual funds sitting there waiting to be deployed. Funds invested in, well, anything. But of course that's not the case. Back in 1960, more than five workers were paying into social security for every retiree. Now that ratio is down to 2.8. People are living longer, and wages are not increasing at the expected clip. So, the program is paying out more and collecting less than planned.

What this all means is that people had better be stuffing their 401k retirement plans and IRAs with as much savings as possible. And not only that, individuals must make good investment decisions. Mechanics, gardeners, carpenters, and computer jocks must not only be good at their professions, but be money managers as well. However, since the median 401k balance holds all of $13,000, future retirees better be spectacular money managers and flawless speculators.

Not likely. In the words of Terry Burnham, "markets are mean," and people are forced to navigate this foreign world with "lizard brains." Speaking at the Socionomics Summit 2012 in Atlanta, the Harvard economics professor and money manager warned Social Mood conferees that herding is normal in life and especially in financial markets. And while our lives are made better by learning and perfecting tasks, this learning does not work well for investing in financial markets.

The lizard part of our brains pushes aside the cognitive areas when we make investment decisions. Lizard-brain functioning was great when we had to track game or escape physical danger to stay alive. But this part of the brain works against success in the modern world, which as Burnham explained, "requires effort toward abstract goals."

The implication is that "Markets are irrational because of quirks in human nature," Burnham explains in his 2005 book Mean Markets and Lizard Brains.

In this very interesting book Burnham explains that our lizard brains are pattern seeking and backward looking, which again was handy when we lived in caves, but not so great for managing our 401ks.

The fact is, without the constant inflation of fiat money, people would (or have to) spend very little time thinking about their money or savings. Squirreling a little money out of every paycheck would suffice for retirement preparation.

But the modern world of central-bank hyperplanning, hyperbailing, and hyperprinting makes that impossible. In his book The Ethics of Money Production, Guido Hülsmann says it is possible to protect one's savings from the government's inflation, but not entirely, even if a person devotes lots of time to studying the markets. To do so, "requires thorough financial knowledge, the time to constantly supervise one's investments, and a good dose of luck. People who lack one of these ingredients are likely to lose a substantial part of their assets."

Hülsmann goes on to point out that even those who can accomplish all of the above will not evade inflation's impact of stealing time from them that would best be spent doing things other than worrying about money and investments. This diligence to personal financial matters

entails many hours spent on comparing and selecting appropriate issues. And it compels them to be ever watchful and concerned about their money for the rest of their lives. They need to follow the financial news and monitor the price quotations on the financial markets.

For the average Joe, the mere idea of making money fires the dopamine neurons in his brain, and because (crazy) people tend to herd, this leads investors to pile into the same investments at the same time, which happen to be investments that have done well in the past. Or in other words, investors gravitate en masse to investments that are overpriced. Merely watching the green arrows on CNBC stimulates dopamine.

So when the Fed hit the monetary gas in 2001, interest rates plunged and the lumpen investoriate collectively plunged into housing only to be massacred by the end of the decade. Before that, Greenspan's Fed lubricated the financial system thinking all kinds of things would go wrong at Y2K. The money sloshed into Internet stocks and investors piled in just in time to lose their shirts.

Dopamine neurons are stimulated only if the rewards exceed the expectation. If investments work as planned, even if the result is good, there will be no rush at reward. And when results are less than expected, dopamine neurons are depressed — creating immense regret.

As a real-estate developer told me in the early 2000s, "interest rates are so low, I have to do something." His brain was already feeling the dopamine tingle of anticipated profits by hearing of the lower rates. As Pavlov's dogs salivate at a bell that reliably signals food, low interest rates transformed investors into Greenspan's and now Bernanke's dogs.

Bernanke's zero-interest-rate policy has investors lunging for yield, buying junk bonds and junk houses. "The rally in junk bonds extends an advance that began in early 2009 and can be traced largely to the Federal Reserve's policy of keeping benchmark interest rates near zero," writes the Wall Street Journal's Matt Wirz. "A pretty robust cottage industry has developed and is absorbing [single family homes] at an incredibly fast pace," Richard Smith, chief executive of Realogy Corp., tells the WSJ.

To add insult to injury, Burnham points out that people are "systematically overconfident. We are bad at doing the calculations required to analyze investments, and simultaneously we are unaware of our shortcomings." And if this isn't bad enough, Burnham points out that numerous studies show that people "reveal themselves to be proud. They are willing to lose money to retain their self-esteem."

Of course this all flies in the face of the efficient-market hypothesis, which claims all market participants are rational, and therefore all news is priced into particular investments at any one time, and there is no such thing as a speculative bubble.

As he wound up his Atlanta speech, Burnham had some sobering thoughts. "Financial markets are the watering hole of society," he quipped. Like thirsty animals on the African Savannah, humans are attracted to the speculative gains that financial markets promise. But, stopping for a drink is likely hazardous to our financial health.

Natural-resource-investing guru Rick Rule is fond of saying what stands in the way of investing success lies to the right of an investor's left ear and to the left of their right ear. Or as Pogo puts it, "We have met the enemy, and he is us."

Professor Burnham says flatly, "Investors can have dopamine or money, but not both."

The government's control of the printing press and its perpetuation, until recently, of the hoax that social security is their actuarially sound retirement plan, has created a generation of Americans that will be entirely dependent on the federal government in their old age. As mean as markets are, the citizenry will find out the government is much meaner.