Hayek on the Tiger | Mises Institute
Skip to main content

Hayek on the Tiger 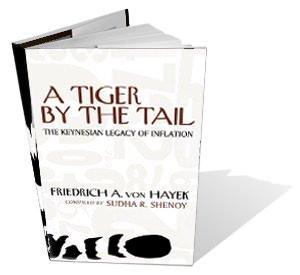 It is generally acknowledged by most economists — from one end of the ideological spectrum to the other — that the government's conduct of recent economic policy has been on almost all counts an abysmal failure.

However, it has yet to be candidly and publicly conceded that all of the activist economic policy of recent decades has been constructed and implemented within the parameters and guidelines laid down in an establishment, neoclassical economic dogma — a comprehensive set of interventionist economic principles almost universally accepted by the same economists who are now railing at the failure of the policy constructed from those very same principles.

Nonetheless, an important crack in the united macroeconomic front has been made with the admission that the policies are wanting and the neo-Keynesian establishment economics does not have a ready answer to explain either the causes or cures of such contemporary economic phenomena as inflationary recession.

There is nothing ideological in the foregoing account of the confusion reigning in the land of contemporary economic theory, for what we are reporting is not that the government has entered into an altogether improper domain, although this is, of course, painfully true from a libertarian point-of-view.

They do not, and under the current methods and theories they cannot, understand the real factors that they are trying so desperately to deal with. The reality of economic law has the Keynesian/neoclassical paradigm on the ropes, waiting for the cumulative political-economic contradictions to swing that last crunching blow, after which the theoretical edifice which has served as the singular source of policy prescription for the past forty years will collapse in the corner whimpering, "In the long run we really do die, don't we?"

Clearly, however, all is not lost. Simply because establishment economic doctrines have failed to achieve a harmonious and productive industrialized socio-economy, it does not follow that it cannot be done, nor does it mean that the managers must be given more time and more power to achieve what they have not yet achieved over four decades of ever-increasing power. There already exists an alternative paradigm ready to replace the current combination of blundering foolishness and vested-interest intrigues.

The Austrian school of economics has a long and honorable tradition, and it has amassed an impressive track record in the explanation of macroeconomic dislocations. Professors F.A. Hayek and Ludwig M. Lachmann must now be considered the co-deans and elder statesmen of this rich and fertile tradition. These two little books by Hayek and Lachmann take the reader immediately to what are, perhaps, the two major problems of current economic theory and policy.

The first is the crucial theoretical mistake: holism. And the second is a policy which, as we shall see, is to a not insignificant degree a result of the holistic error: inflationism.

Both Hayek and Lachmann are strict methodological individualists, i.e., they proceed from the axiom that all economic phenomena can and must be traced back to the preferences, expectations, and plans of individual economic actors. Only individuals make economic decisions, i.e., choose among alternatives, plan, and act.

It is true that economists of other schools of economic thought (e.g., the Chicago school) genuinely consider themselves to be methodological individualists, and indeed they often are, as long as they restrict their area of discussion to the domain of microeconomic analysis. But the further they stray into the world of macroeconomics, the more they leave behind the methodology of focusing on the individual as the unit of economic analysis.

This is the problem that Lachmann calls "Neo-Classical Formalism." By this he means an unhealthy concentration on aggregates or "wholes," treating them not as abstractions or mental tools fashioned to help cope with large numbers or amounts of data, but as real and, therefore, amenable to quantitative manipulation. Hence the Hayekian term "holism," or what Professor von Mises called the process "hypostatization."

We are all familiar with the argument that the whole is greater than the sum of its parts. This seems to be weak logic under any circumstances. When applied to the social sciences, it becomes sheer disaster.

For instance, "society" becomes greater, and by implication more important, than the individuals who constitute it. We all know where such collectivistic attitudes have led in the past. Libertarians have good reason to suspect that those economists who are bound to the methodology of holism are not essentially economists (interpreters and explainers of economic processes) and that they should be regarded as latent political economic manipulators who deserve the most careful and suspicious observance.

But let us now focus our attention on an aggregative whole which is somewhat less cosmic in its dimension than the whole called society, but, nevertheless, a whole which when taken too seriously can and usually does lead to a great deal of economic confusion and, ultimately, to considerable human misery.

With the constant contemporary references to inflation, the wholesale and consumer price indices, price stability, et cetera, it might seem strange to ask the question, "Is there a price level?"

But Austrians unabashedly ask just that question. Austrians, of course, recognize that there exist statistical methods of determing "in general" whether the cost of living is becoming dearer or not, whether the purchasing power of the currency is rising or declining, et cetera, and that these methods can from month to month be applied with something approximating "precision."

But they emphatically deny that there is a precise "price level" which can and ought to serve as an integral element in formulation and evaluation of economic policy. At best, the "price level" is a very rough "ballpark" estimate of relative aggregate change between two necessarily very close points in both time and economic condition. What the Austrians are predominately concerned with is the composition of the aggregate, i.e., the constituent elements which are the reality of the aggregate and the various interrelationships of these elements.

For decades "Neo-Classical Formalism" has entailed an undue concentration on the "general price level," with an eye toward the attainment of an era of "price stability." Beginning mainly with the work of Irving Fisher and continuing at present with that of Milton Friedman, the history of economic thought has witnessed what Murray N. Rothbard has rightly called a "fetish" of price stability.

If price level has any meaning at all, it can have that meaning for only one particular moment in time, i.e., each historical moment is unique and necessarily has its own set of unique price relationships. Each historical price index, if a meaningful one can be compiled at all, is an outgrowth of the whole array of unique exchange relationships in unique demand and supply situations and with a unique supply of money — in relation to which the market participants each, and in the aggregate, will have unique psychological attitudes, i.e., the demand to hold cash will change with changing circumstances. The upshot being that, even if there is an intelligible price index or price level, it will have very little, if any, meaning over time.

The use of the price-level concept in a program to promote "price stability" has proved disastrous in two ways:

Sudha R. Shenoy, the brilliant young economist who is rapidly becoming "Vienna's" own Mrs. Robinson, offers a short but penetrating introduction to the excellent Hayek selections which she has compiled in A Tiger by the Tail.

[The Mises Institute has cooperated with IEA to completely reset the book and publish it anew. This new edition includes an introduction by monetary theorist Joseph T. Salerno.]

She underscores the destructive results of increasing the money supply in order to maintain a "stable price level." She trenchantly observes that, once started, a seemingly innocuous policy of maintaining any given "price level" — either by increasing bank credit or by deficit spending — leads to either a policy of ever accelerating inflation to ward off the day of reckoning, or to a halt to money supply increases with the ensuing politically difficult and socially painful period of price readjustment, i.e., depression. (Hence, Hayek's apt term "a tiger by the tail.")

Deep within the esoteric and "unpractical" world of methodology, there lurks the holistic source of a policy prescription which, when carried to its logical conclusion, leads ineluctably to conditions of economic chaos. These chaotic conditions, in turn, widen the doors to statists and morally wavering "technicians," further enabling them to usher in such antilibertarian policies as comprehensive price controls, tariffs and exchange controls, and universal price indexing.

Professor Lachmann has for too long been a neglected member of the Austrian school (even by many Austrians), but he has generated numerous journal articles and several books, each of which has contained significant additions to and refinements of the Austrian tradition. In Macro-Economic Thinking and the Market Economy

, Lachmann steps center stage into the controversy currently raging in the world of macroeconomic thought.

This controversy is between the MIT, Samuelson-Solow, "NeoClassical Formalists," on the one hand, and the Cambridge, Sraffa-Mrs. Robinson, "Neo-Ricardians," (Lachmann's happy tag for many of the quantitative-objectivistic-holistic trends in economic thought), on the other hand.

The central controversy, which often appears as a veritable arcana of abstract, economistic doubletalk about the nature of profit, the switching of production technique, the reswitching of the same, et cetera, is presented by Lachmann in an eminently clear and succinct manner.

He also points out the deeply disturbing implications of the subject for politico-economic policy. He subjects both sides to a devastating Austrian critique. Here, at the mainspring of current macroeconomic thinking, we find the source of a number of deep problems currently plaguing macroeconomic theory. Lachmann goes into them all: a submergence of the real and individual causative factors of socio-economic phenomena under the guise of "scientistic" abstractions and aggregates, a misunderstanding of the source and nature of both profit and interest, and a total misapplication of such mental constructs as "Market Production Function," "Growth Equilibrium," and others. 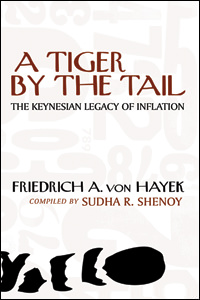 In these works, Hayek and Lachmann present the reader with a convenient introduction, first, to several of the most pressing macroeconomic problems of the day, and, second, to what must be considered a radical but eminently sound and systematic analysis and approach to solving many of today's economic problems.

In both of these books, the reader will quickly see that the Austrian school has a ready alternative for the current macroeconomic miasma. This analysis involves all levels of abstraction, and working one's way through them is often difficult and momentarily perplexing. Nevertheless, as with any worthy intellectual undertaking, the aesthetic returns alone are often sufficiently rewarding.

Walter E. Grinder is the former head of academic affairs for the Institute for Humane Studies.