Gambling to Save New Orleans 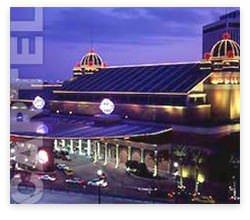 Libertarian writers fight uphill battling regulation after regulation. Any small tariff, restriction, and tax create adverse effects. Often, laws are so mangled together that one cannot make a difference with the removal of only one element.

Sometimes, however, the change of one regulation can make a world of difference. I offer a change with a remote law in New Orleans that can prevent the city's continued decline and fall. The edict that must be removed is the monopoly on gambling held by Harrah's casino.

The current law allows only one land-based casino in New Orleans. This casino, Harrah's of New Orleans, is primly located on Canal Street, conveniently across the street from the French Quarter. A gaming industry entrepreneur could not ask for a better location.

For a very long time, New Orleans has existed as a gambling city at least through back-door card games. Its gambling history vibrates through song specifically in the "House of the Rising Sun" covered by the Animals.

How will New Orleans benefit from the repeal of the casino restriction? There would be perhaps a dozen or more casinos offering low-skilled, high-paying jobs to the residents of New Orleans.

New Orleans, despite statistics of unemployment, has never had a deficit in the job market. Jobs are particularly easy to locate as many restaurants with traditional high turnover rates constantly seek new employees. The real problem of the New Orleans job market is finding a job that pays well and requires low skill at the same time.

The casino industry provides this alternative. Yes, being a casino card dealer requires intense knowledge of proper gaming etiquette. However, anyone can learn this on the job or through proper job training. Casinos pay high wages that make working preferable to leisure time on welfare.

Currently, the Iberville Projects are immaculately located near the French Quarter, the most likely place for an unskilled laborer to find employment. Yet the incentive is still not strong enough for subsidized unemployed laborers to walk two blocks.

Mississippi Gulf Coast, an area also ravaged by Hurricane Katrina, had about a dozen casinos. Why does Mississippi near a polluted beach have a dozen casinos while New Orleans, a capital of world tourism, has only one? The obvious answer is the difference in law.

In Mississippi, casinos are allowed as long as they are built on the water. In New Orleans, only one casino is allowed. If I was a gaming industry entrepreneur and someone asked, "Where would you rather build a casino? New Orleans or the Mississippi Gulf Coast?" Without a moment of hesitation, I would answer New Orleans!

Further evidence points to the fact that New Orleans can support multiple casinos. In the suburb of Kenner, the Treasure Chest casino does well for itself. Being out of the way, the Treasure Chest is not even utilizing the demand of tourists. It mostly runs on the risk-taking desires of locals. Casinos in Pearl River, Mississippi near the Louisiana border also serve New Orleans consumers.

Even the regulations on the Mississippi Gulf Coast pose a major threat to business. The casinos are forced to locate on the water. Can anyone think of a dumber regulation in a hurricane-molested area? The regulation was a direct catalyst for disaster and destruction.

Without the one land-based casino regulation, the dozen casinos on the Gulf Coast would likely be located in New Orleans instead. The jobs brought by the casino industry could create the high-paying jobs that would have solved a large part of New Orleans poverty.

The issue is not as simple as it may appear. Surely, any New Orleans mayor would realize the advantages to gainful employment from casinos. The argument of immorality and crime brought by gaming industries cannot be justified. If anyone knows a city more morally bankrupt than New Orleans … please inform me.

Obviously, the city has granted a fascist-like monopoly within the city limits over the lucrative tourist industry. This appears to be the apparent cause, and it is partially true.

Many feel that the casinos will ruin the feel and "style" of New Orleans. As mentioned earlier, this has always been a gambling town, and its reputation will surely not be smeared by the construction of more places to gamble.

This "style" argument was made against Wal-Mart entering the city one year ago. People worried that the first Wal-Mart in New Orleans would destroy the "style" of the city. The Wal-Mart prevailed and is currently located in the Warehouse District. I do not feel it necessary to describe to the reader the "style" of the Warehouse District. But surely it was not ruined by Wal-Mart.

What "style" are proponents of these restrictions trying to protect? Perhaps the projects and slums? I know nothing feels more historic than seeing houses equivalent to 19th-century slave cabins in most parts of the city. With economic restrictions, this "style" is the end result.

The casino would not destroy the city because of New Orleans's historic advantages. The casino gathers tourists through the significance of historic areas. If the casinos destroyed historic places, they would be also destroying their own profits.

If this is the reasoning for protecting Harrah's, why not have only one grocery store for New Orleans? Or one gas station? Or one fast food restaurant? If this policy was applied on a grand scale, the city would be in utter chaos!

The style of the city is only represented by the dollars consumers are willing to spend. Wal-Mart has been booming. Harrah's casino appears to get more customers than Bourbon Street these days. The truth is revealed in dollars and profits.

The day to allow completely free gambling in New Orleans is far overdue.