GET NEWS AND ARTICLES IN YOUR INBOXPrint
A
A
Home | Mises Library | Friedman and the Fed: Is Liquidity the Answer?

Friedman and the Fed: Is Liquidity the Answer? 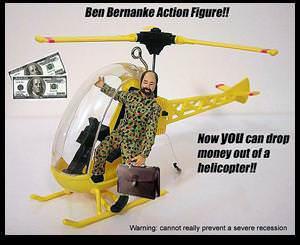 I recently heard a radio interview with a prominent economist who was defending Federal Reserve Chairman Ben Bernanke's moves to shore up the markets on Wall Street. Bernanke, the economist said with emphasis, had spent years studying the "mistakes" of the Fed during the Great Depression and was not going to repeat the "errors" that the Fed directors committed from 1930 to 1933.

The "errors" of which the economist spoke were outlined by the late Milton Friedman both in his 1963 A Monetary History of the United States (written with Anna Schwartz) and his popular Free to Choose (with Rose Friedman), published in 1979. According to Friedman and his coauthors, the economic collapse that occurred in the United States from 1930 to 1933 came about because the Federal Reserve System failed to act in the face of bank failures and banking panics, leading to a massive contraction in the amount of money in circulation, which ultimately led to the calamity.

Friedman made his arguments as a means to counteract the common explanation of the Great Depression — that it was the result of the "internal contradictions" of capitalism. The typical explanation, popularized by John Kenneth Galbraith as well as the gaggle of Keynesians that proliferated in US universities, was that the capitalist system tends toward "underconsumption" or its evil twin, "overproduction."

(Galbraith held that underconsumption occurred because the income "gap" between the wealthy and poor grew during the 1920s — another "natural" outcome of capitalism — while John Maynard Keynes and his followers held that private investment spending was volatile because of the "animal spirits" of investors. The system had a built-in, self-multiplying, downward spiral whenever private investors were unwilling to throw more money into the economy.)

Those who blamed the Great Depression on the "failures" of the free market were all too happy to come up with their own "solutions," including attempts to cartelize the entire US economy or to force up wages via increased minimum-wage legislation or through the endorsement of expanding labor unions. Some, like Galbraith, went further and advocated out-and-out socialism and central economic planning. The free-market system, they have argued, is too inherently unstable to be left to its own devices. (This is the same argument that Paul Krugman makes twice a week from his perch on the New York Times op-ed page.)

This alone is quite interesting, as Friedman was willing to buy into a government-run monetary system — "socialist" money — even as he tended to condemn other things socialist. However, he also was willing to admit that the fractional-reserve banking system (which he heartily endorsed) was subject to all of the instabilities one would expect when there exists a monetary system in which multiple claims are made on a single source.

Nonetheless, I do not wish to dwell on Friedman's inconsistency. Instead, I wish to look specifically at his claim that the Great Depression could have been avoided had the Fed simply provided enough "liquidity" in the system. This is more than an esoteric exercise, as it seems that Bernanke has taken a page — or, perhaps, a number of pages — from Friedman's playbook.

The Fed's latest move — permitting reeling financial institutions to use near-worthless mortgage securities as collateral for about $200 billion in loans — is yet another example of Bernanke's promise to "provide liquidity" at every step, as though the real crisis here is the lack of play money in the nation's financial system. The problem here is that the original Friedman thesis was wrong, and that Bernanke's glorified dropping of money from the Official Fed Helicopter is just as foolish.

Murray Rothbard's America's Great Depression was first published, ironically, in 1963, but it tells a very different story than does Friedman. Rothbard's book points out that the economic collapse from 1930 to 1933 did not happen because the Fed failed to provide "liquidity" to the system, but rather because the government intervened in an economic downturn and managed to turn a recession into an out-and-out calamity.

For example, Friedman notes (accurately) that there were more than 4,000 bank failures during this period and somehow wants us to believe that had the Fed loaned enough money (via the printing press) to enough banks, that we would not have seen so many bank failures. However, he leaves out something that is very important: the passage of the Smoot-Hawley Tariff Act in 1930.

This infamous tariff, passed and signed by President Herbert Hoover despite the pleas of more than 1,000 economists who signed a letter urging him to veto the bill, not only made it nearly impossible to import consumer and capital goods from abroad, but also destroyed the export market for US farmers. Thus, a bill passed to raise production prices in this country ultimately ended up reducing prices for agricultural products.

The fall in farm prices also meant that the assets of rural banks — which held most of their assets in crop and farm-equipment loans, as well as farm mortgages — also tumbled in value. To make matters worse, many states outlawed branch banking, which meant that when a rural bank's asset values fell and the banks became insolvent, there was no Plan B. (During this period, no banks in Canada failed, despite the same economic pressures. Canada permitted branch banking.)

No amount of intervention from the Fed could have saved these banks, which were as much victims of Smoot-Hawley as firms that depended upon imported goods. But that was not the only reason that banks failed, according to Rothbard. During the 1920s, the Federal Reserve System — and especially the New York Fed — aggressively purchased government securities (in so-called open market operations) and expanded the amount of money by expanding bank reserves, which ultimately turned into loans.

The resulting monetary expansion found its way first into the Florida land boom, and then later into the stock market bubble. (In the 1990s and 2000s, the order was reversed: first we had the stock bubble, and then the real-estate boom.) Massive malinvestments also mean that massive corrections must follow, which was what happened in late 1929 and 1930. Likewise, the malinvestments that pumped up stock values, which came to a hard landing in 2001, were simply redirected, this time into the housing market.

(A couple years ago, while appealing a property-tax valuation on my former home in Cumberland, Maryland, I told the board that the current housing boom was going to have a big bust. I might as well have been telling the world's funniest jokes, given the laughter my comments received. People in the markets — who are supposedly more adept at understanding the financial system than some political hacks setting local tax rates — were apparently asleep at the switch, too.)

Here is the problem that Bernanke faces, and it cannot be solved simply by using a bigger helicopter: the Fed and the US government were pushing huge malinvestments upon the economy. The housing market was anything but consistent with the fundamentals of the market, and there is no way that these wrong-headed policies of pumping up this market to levels beyond any kind of recognition can be mitigated with … printing dollars.

The central issue is that the Fed pushed a policy of inflation, with much of the new money going into the mortgage markets; there is no way to avoid the painful and terrible corrections that must follow such fiscal foolishness. (Now we finally see massive commodity-price increases, which have occurred because there is nowhere for the new money to go but directly into commodities and consumer goods.)

Anyone who believes that the Fed can pretend that heavily damaged mortgage securities are worth more than toilet paper and literally build a $200 billion loan portfolio upon them does not understand finance. Just because Ben Bernanke declares something to be "valuable" does not bestow value upon it.

The simple issue is not lack of liquidity. It is the fact that billions — make that trillions — of dollars were malinvested in markets where the increasing values could not be sustained. To pump near-worthless dollars into this mix does not solve anything; it only ensures that the coming day of reckoning will be even more unpleasant than it would have been otherwise.

In the early 1930s, Hoover boasted that government intervention kept the financial crisis from becoming worse than it would have been otherwise. He was delusional, to put it mildly. Instead, the Hoover "New Deal" led to Roosevelt's "New Deal," which led to a decade of double-digit unemployment — unprecedented in this nation's history.

One hopes that Bernanke does not earn Hoover's mantle. However, as long as he tries to follow the Friedman thesis, he runs the risk not only of destroying his own reputation but of destroying the US economy as well.