GET NEWS AND ARTICLES IN YOUR INBOXPrint
A
A
Home | Mises Library | Freedom, Naturally 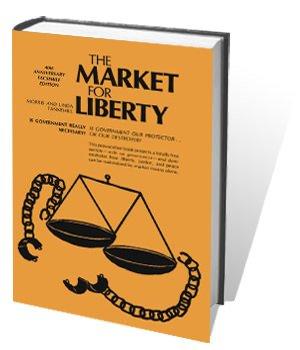 [The Market for Liberty: Is Government Really Necessary? • By Morris and Linda Tannehill • Fox & Wilkes, 1993 • 169 pages. This review is republished with permission from the Daily Reckoning.]

It is at times useful to imagine how a truly laissez-faire society, one entirely emancipated from the shackles of state coercion, might exist and operate. Morris and Linda Tannehill examine this very idea in The Market for Liberty: Is Government Really Necessary?

The Market for Liberty imagines a totally free society — one with no government intrusion whatsoever — in which the free market is left to respond to the demands of individuals without recourse to institutionalized coercion, implied or actual. Is such a stateless existence even possible, much less preferable? Or, as so many contend, is it merely an academically contrived utopia?

Morris and Linda Tannehill address all the usual fears and protestations that a truly nongovernmental — i.e. anarchist — society conjures up.

Whenever there arises in conversation the mere suggestion of a totally free, laissez-faire market — the possibility that human beings might even be able to survive (much less thrive) without the safety net of state control — apologists for "benevolent government" invariably step atop their soapboxes and ask, "Yes, but who will provide education for the masses, if not the public schools?" or "Who will care for the sick and weak, if not the public hospitals?"

Indeed, these are questions that deserve thoughtful, honest answers. But these questions assume realities that are not in evidence.

They suppose that "the public" (i.e., the state) actually has money to "provide" these services, rather than, as is actually the case, first having to expropriate (steal) it from private, productive individuals. Furthermore, the fallacy of benign governmental control relies on the idea that governments can provide essential services more reliably and cost-effectively than the private sector.

is that errors and injustices are self-correcting. Because competition creates a need for excellence on the part of each business, a free-market institution must correct its errors in order to survive. Government, on the other hand, survives not by excellence, but by coercion; so an error or flaw in a governmental institution can (and usually will) perpetuate itself almost indefinitely, with its errors being "corrected" by further errors. Private enterprise must, therefore, always be superior to government in any field.

(It is worth mentioning here that corporations acting in collusion with the state are not private enterprises as the Tannehills define them. They are simply entities that have co-opted the government's "gun-for-hire" to do their dirty work for them. Think Wall Street "bailout" recipients and their army of DC lobbyists. Indeed, think any institution at all that seeks unfair protection or promotion from the state.)

Indeed, the statist continues, how would "the law" itself even come into being, and in what shape would it find application in the absence of the all-knowing, all-powerful state? The Tannehills address these anxieties thoroughly and logically. "Freedom is not only as moral as governmental slavery is immoral," they write, "it is as practical as government is impractical."

Discussions criticizing the state's myriad shortcomings and follies are many. The Tannehills' Market for Liberty takes the extra step in providing viable, concrete solutions to state-sponsored dilemmas. The free market, they argue, can correct the state's tendency toward costly excesses, and can do so peacefully and voluntarily, simply by following price signals from the market itself.

The Market for Liberty is, for all intents and purposes, a very real, practical solution set to those most commonly presented excuses for acquiescing to governmental authority. The government is not merely a "necessary evil," the Tannehills argue. "It is necessarily evil." 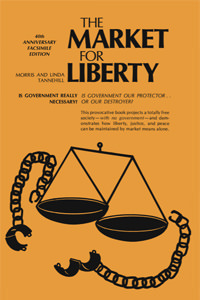 Of course, The Market for Liberty does not project a utopia in which acts of violence simply disappear and where every individual immediately sets off on a long road to perfection. Rather, the authors illustrate how individuals acting in their own self-interest, coming together to engage in mutually beneficial exchanges, are thus incentivized to act with honesty and integrity.

"The history of governments always has been, and always will be, written in blood, fire and tears," the Tannehills assert. In The Market for Liberty, they show how freedom is not only an alternative to the state, but a far superior one worth, at the very least, our immediate and undivided attention.

This review is republished with permission from the Daily Reckoning.

Joel Bowman is managing editor of the Daily Reckoning. After completing his degree in media communications and journalism in his home country of Australia, Joel moved to Baltimore to join the Agora Financial team. His keen interest in travel and macroeconomics first took him to New York where he regularly reported from Wall Street, and he now writes from and lives all over the world.