Freedom and Chaos in Tiananmen Square 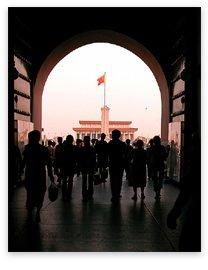 Tiananmen Square never seems to leave the news. People jailed during the uprising are still being released from prison, records previously guarded as state secrets are coming to light, and books on the topic keep coming out.

China's status as one of the world's fastest growing economies, ever transitioning toward a market model, draws our attention to these fateful days of the summer of 1989.

The political dynamic was always more complicated than it appeared on television. It was not merely a case of freedom-loving students protesting a totalitarian state, as it seemed to many people at the time. It is entirely possible that if the protestors demands had been met, China would be less free than it is today.

And yet there are still lessons for those who love liberty in what occurred in those days. The main one is something most people miss: the manner in which the protest movement formed and organized itself demonstrates that liberty does not need political democracy in order to work to the benefit of everyone.

It all started out very simply. Dissatisfied with unemployment, inflation, general living conditions, and the government response to the death of Hu Yaobang, Chinese students made some relatively modest demands of the government. They wanted better food and dorms, official recognition of a relatively liberal leader, Yaobang, and a more daring demand of democratic change.

Others complained that the pace of economic reforms was moving too quickly, and that China was backing away from its commitment to Communist ideology. Still others had some inchoate sense that something had gone wrong and wanted some way out.

This would become the 1989 demonstrations, a period of two months in China from April to June of 1989 in which millions of Chinese citizens with disparate interests and goals protested their oppressive government.

No such demonstration against the People's Republic of China had ever been seen in one of the greatest single prospects for freedom in the last century. But such demonstrations were not poised to bring freedom for the reasons most people believe.

Western observers, and indeed the student protestors themselves, saw democracy as the means to free the poor, the oppressed, unemployed, and political prisoners from Communist leadership.

Interestingly, the state controlled education in China meant that nobody protesting knew what democracy really was. They thought it must have been a good thing, and believed Western nations were freer because of it and wanted it.

When millions were gathered in Tiananmen Square and student leaders considered withdrawing because of the looming threat of martial law being declared, they decided to vote on the matter. As author Jan Wong pointed out, because of their lack of understanding of how western democracy worked, the students didn't withdraw because they thought only a unanimous vote could justify it. And thank goodness they didn't.

As is to be expected when government power is threatened, and American observers such as Henry Kissinger had later justified, the politicians showed a perverse, infantile kind of anger. Any such threat to power surely isn't out of a desire for prosperity, freedom, and peace, the politicians argue. It is always just some radical minority who wishes to cause trouble.

As the official Chinese newspaper, the People's Daily, said of what they claimed was a minority of counterrevolutionaries, "Their goal is to poison people's minds to create turmoil throughout the country."

The Communist Party was split over how to deal with the millions of protestors, with some favoring diplomacy and others favoring a declaration of martial law.

One party leader met with student leaders who were weakened from a hunger strike and wearing pajamas. The party leader planned on lecturing the students in an arrogant display of paternalism as if they were his children. Instead, the students dared to interrupt, and even wagged their finger at the politician, something unheard of in China.

But something even more astonishing happened within the structure of the protest movement itself. As Dean of U.C. Berkeley's School of Journalism, Orville Schell, noted of Tiananmen Square,

"It was like a miniature city. There were places where the contributions were collected by banks. There were food commissary areas. There were sleeping areas. There were hospital areas. Self police. No violence. No theft. The whole city for this amazing period of weeks became a city of tranquility and brotherhood."

Not "like", Professor Schell. It was a city. And a stateless one at that.

No majority vote or democratically elected leader, and certainly not a socialist planner, was necessary to make such order arise out of the apparent chaos of the free market that existed in Tiananmen Square. Apparently, when people are free to act on an unhampered market where titles of ownership are respected and exchanged, the interests of everyone involved are in harmony with one another. This truly was an original revolution for the people.

Curiously enough for the People's Daily, turmoil was not erupting around China. In fact, a great ordering of society was finally taking place. It was only when the government stepped in with its guns on its own people that chaos took hold. The People's Republic of China had only been used to reorganizations (rather, disorganizations) of society as decreed by the state. Order was supposed to come from the top down.

If only the Chinese government could have backed off and let capitalism spread, the students may have realized that they didn't need democracy. They had all they needed at their disposal. They needed no political consultants or economists to tell them what to do.

No one needed to tell them what transactions benefited them more than others, or where they were willing to buy or sell a good at a certain price. If the student leaders calling for democracy realized the logical implications of these free-market actions, then perhaps they would have rejected democracy outright. As it was, they had full fledged anarchy in the square, and they were thriving on it.

While observers such as Professor Schell may look upon the peace and prosperity that arose in anarchy as a peculiar phenomenon, it should be no surprise to anyone who understands how freedom works. Such order would have spread and continued to thrive in the absence of government intervention. This is simply what happens when you let people be free.

As of May 17, 1.2 million people were in the square, and there was still no overpopulation problem.

"Looking down the Avenue of the Eternal Peace in either direction for miles and miles and miles you saw nothing but well over a million people flooding into the square. Banners [were] flying, and every conceivable organization in the city — the air force, the police, the hotels, universities, factories, the post office, all flying these banners and marching into the square…"

Yet, statists and supporters of democracy necessarily overlook the fundamentals of how the order and prosperity that arose in Tiananmen Square entails no principles different from what would arise in the absence of democracy, say, in the United States today.

Many people who would have expressed support for the protestors would be glad to have mired them in majoritarianism and bureaucracy. Imagine the horror that left-liberals such as Molly "Government is Efficient" Ivins would feel in the absence of nanny-state interventions and price controls. Communist China was and is uncomfortably closer to their ideals than anything for which the protestors demonstrated.

And conservatives such as Jonah "Libertarianism is for Kids" Goldberg would be delighted to reinstitute measures the Communists had over the lives of the Chinese to keep kids from being libertines. With good guys in charge, of course.

In short, we can see a heartening example of what capitalism in the absence of the state will yield when, for a brief but glorious time, a free market thrived in China.

Andrew Mitchell is a public-policy student at Marymount University.