GET NEWS AND ARTICLES IN YOUR INBOXPrint
A
A
Home | Mises Library | Free Riders: Austrian v. Public Choice 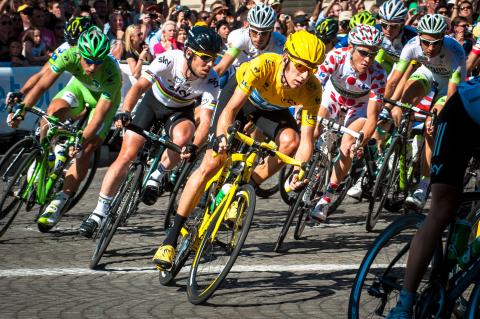 The latest exploits of Lance Armstrong in this year's Tour de France provide a solid backdrop for discussions contrasting the economic ideas of the Austrian School and the adherents of Public Choice.

Public Choice is predicated on the belief that individual preferences can be known and quantified. From this simplistic view of Thymology, the Public Choice school deduces supposed economic laws regarding government interventions in the market. Government is required because acting man cannot negotiate agreements effectively with other self-seeking acting men.

The Austrian School starts from an aprioristic axiom that humans act by using means to obtain ends. Their ends are individualistic and self-centered. The Austrians do not claim to know unrevealed individual preferences nor do they deduce the need for government interventionism in the market. Acting man is able to create working arrangements with other acting men that benefit all involved.

OK. Good and well. But what about the Tour? How can a bicycle race be applied in discussions of economic theory? Simple. Cycling is an excellent reflection of the market. 198 professionals begin each year's Tour with certain unrevealed goals. Sure, some end goals are widely known. For Lance, a seventh win. For Jan Ulrich, a chance to redeem himself. But what about the 196 other riders?

As in all sports, and all human activities for that matter, there are those few who sit at the pinnacle. The rest are simply one of the bunch. Sure they dream of winning the Tour, but more than likely they are concentrating on the wearing the best-in-the-mountains jersey, the best-in-the-sprints-jersey, winning a stage, or just securing a professional contract for next year.

Public Choice assumes that every racer has the same goals and will react like any other racer in all situations. The Austrians will have none of that. It is impossible to look at a rider and know for certain what he wants to achieve during any given day of the Tour. Certainly you may guess what his team has set for him but what really lies in his heart is unseen and unknown, at least until human action reveals his preferences.

In bicycle races, individual riders will typically "attack" the main field of riders in order to gain time over those other riders and a better chance of success. Better to be 1 of 4 in a small “breakaway” group at the finish line than 1 of 198 in the large field.

In order to gain time, riders must work together by taking turns leading and blocking the wind so that the following riders can rest awaiting their turn at the front. So there you have it, 4 riders with widely divergent preferences working together for a common goal. The four have established a de facto contract that is to everyone’s benefit, even though none knows the other's true motives.

One may assume that they all are looking to win the stage. Possible. But it's also likely that one just wants some time in front of the cameras, another wants to pad time on rivals, a third is there just to assist his team’s goals, and the fourth wants the win so bad he can taste it.

But how do the four create this ad hoc contract? A quick glance, a nod, a wink, or a few words exchanged is all that is required for the four riders at hand to build a successful coalition. Public Choice will have none of this reality. They say that negotiation cannot be frictionless and that only through government interventions can people agree to work together.

Think again. Everyone wants to ride in a breakaway group for free. Who wouldn't? Conservation of energy is important when you are racing over 2,000 miles in three weeks. But pressures internal to the coalition typically force the "free rider" to perform. In reality no one really knows if the all racers in the breakaway are giving their fullest effort because no one really knows other's internalized desires and abilities.

There are always “free riders” or “free loaders” in all human activities. That becomes just another datum assumed when choosing amongst alternative choices. Every racer in the Tour understands this quite clearly. Accept it and move on.

Externalities? Come on: every action creates supposed externalities. Should Lance be taxed to offset help he received during the Tour from other riders who were actively pursuing their own selfish interest? Who would create and administer the Pigovian tax structure that would offset all of Lance’s gains and loses? Can even the Cray Supercomputer solve these equations and derive a payout before the 2006 Tour begins?

OK. Individual preferences unrevealed, externalities, “free riders” everywhere, and ad hoc contracts being agreed upon without legal signatures. But what about society? What is best for the collective group of 198 riders? Can this spontaneous order (or disorder, depending on your viewpoint) be best for all? Is this even close to Pareto optimality? It all depends. If you agree that each rider has unrevealed goals, throw that neoclassical equilibrium out the window. The impossible task becomes the creation of an aggregate demand curve.

So, assume that you can create this curve. What would you have? A Tour that functioned much like the Soviet economy. As stated above, all riders want to be “free loaders”, er “riders,” in that they don’t really want to suffer over a hundred miles of mountain roads if their needs were truly going to be met otherwise. Why sweat and pound the asphalt when you can lazily ride and occasionally stop to view the sights?

A couple of problems will arise. First, all riders cannot be designated the Tour champ – the Tour is not a Kindergarten class – so all needs cannot be met. In order to correct for this, the results would have to be created in a manner that approximated the regressed preferences of the aggregate field. Lance would probably remain champ and the other riders would be slotted into their likely finishing positions – all based on creating the efficient solution.

This lead to the second problem, this manner of racing would be slow and boring. Who would watch the riders literally tour France at a leisurely pace? Other than a spouse or two, probably just a few mothers, fathers and girlfriends. The Tour would be no more and 198 riders would be out of a job, all to satisfy some odd belief in equilibrium and utility. This is not a very satisfactory solution.

As you enjoy the Tour on TV remember that riders from many countries, speaking a host of different languages, are able to negotiate productive contracts that are mutually beneficial to both riders and viewers.