GET NEWS AND ARTICLES IN YOUR INBOXPrint
A
A
Home | Mises Library | Francis Hutcheson: Teacher of Adam Smith 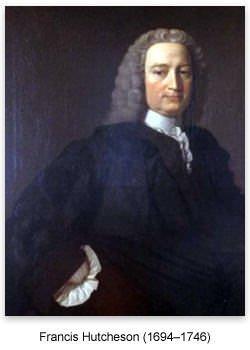 Carmichael's most prominent student and follower was his successor at the chair of moral philosophy at Glasgow, Francis Hutcheson (1694–1746). Hutcheson, too, was the son of a Presbyterian minister of Ulster Scottish (or "Scots–Irish") stock, who was born in Ireland. Educated in Glasgow and then Dublin, Hutcheson succeeded to the moral philosophy chair at Glasgow in 1730, upon the demise of Carmichael, where he taught until his death 16 years later. Hutcheson brought to Scottish philosophy a solid belief in natural rights and in the beneficence of nature. Hence Hutcheson brought to Scottish thought the basic classical-liberal worldview.

Francis Hutcheson was a stimulating and dynamic lecturer, who introduced the style of pacing up and down in front of his class. The "never-to-be-forgotten Dr. Hutcheson," as Adam Smith referred to him in a letter half a century later, was the first Glasgow professor to teach in English instead of Latin, and also the first to become friend, guardian, and even banker to his students. His lectures on philosophy, politics, law, ethics, and political economy drew students from all over Britain, the most famous of whom was Adam Smith, who studied under him from 1737 to 1740. Hutcheson's major work, the System of Moral Philosophy (1755), was published by his son after his death.1

Hutcheson's treatment of value in his System is virtually identical to that of Pufendorf. Again, utility and scarcity are the determinants of value. Beginning with the statement, "when there is no demand, there is no price," Hutcheson also points out that some highly useful things, such as air and water, have little or no value because of the bountiful supply furnished by nature. An increasingly scarce supply will raise the value or price of a good; a more abundant supply will lower them. Furthermore, Hutcheson perceptively defines "use" highly subjectively, not simply as a good which naturally yields pleasure, but as "any tendency to give any satisfaction, by prevailing custom or fancy."

Unfortunately, however, Hutcheson also took the Carmichael confusion about real costs and escalated it. For Hutcheson not only brought in the "difficulty of labour" as a determinant, he also made it even more determining "where the demand for two sorts of goods is equal."

Foreshadowing Adam Smith's famous analysis, Francis Hutcheson stressed the importance of an advancing division of labour in economic growth. Liberty on the market involves reciprocal aid through mutually beneficial exchange, a prime example of the beneficence of nature. The division of labour is a key to the preservation of human life, and Hutcheson shows the enormous advantages of specialization, skill, and exchange over the puny productivity of an isolated Crusoe. Extended division of labour also connotes a more extensive communication of knowledge and permits greater use of machinery in production.

In his analysis of money, Hutcheson set forth an analysis of which commodities are likely to be chosen as money on the market that used to be standard in money and banking texts until governments destroyed the gold standard in the early 1930s. Money, Hutcheson pointed out, is a commodity generally accepted in a particular country, that becomes used as a general medium of exchange, and as a common standard of value and measure for economic calculation. Commodities which are chosen as money on the market are those with the most money-ish qualities: already generally desirable and acceptable in exchange; divisible into small quantities without losing their pro rata share of value; durable for long periods of time; and portable, for which quality they must have a high value per unit weight. Generally, he pointed out, silver and gold have been the two commodities that have been chosen as by far the most suitable as money, with coins becoming the most popular form precisely for being divisible and easily carrying a warrant of purity.

Hutcheson's most impressive achievement was his sharp rebuttal of the satiric Bernard de Mandeville (1670–1733), whose enormously popular Fable of the Bees, or, Private Vices, Public Benefits was published in 1714, and expanded and reprinted in several editions over the next 15 years.2 In a pre-Physiocratic, proto-Keynesian piece of mischief, the Fable maintained that the vice of luxury, no matter how deplorable, performs the important economic function of maintaining the prosperity of the economy. Many historians, especially F.A. von Hayek, have held Mandeville to be a forerunner of Smithian laissez-faire, since Smith held that individual self-interest is harmonized with the interests of all through the operation of competition and the free market. But the intent and the analysis are very different, for Mandeville stressed the alleged paradox of "private vice, public benefits," and the "benefit" was to come through the pre-Keynesian mechanism of consumption spending. Mandeville, furthermore, did not in any sense draw laissez-faire conclusions from this analysis; on the contrary, in a Letter to Dion (1732) published shortly before his death, Mandeville insisted that not the free market but the "wisdom" and "dexterous management of a skilful politician" are needed to transform private vices into public gain.

Mandeville's work, furthermore, was virtually the living embodiment of what the 19th-century French laissez-faire economist Frédéric Bastiat would call the "broken-window fallacy." Mandeville not only defended the importance of luxury but also of fraud, as providing work for lawyers, and theft, for having the virtue of employing locksmiths. And then there was Mandeville's classically imbecilic defence, in his Fable of the Bees, of the Great Fire of London:

The Fire of London was a great Calamity, but if the Carpenters, Bricklayers, Smiths, and all, not only that are employed in Building but likewise those that made and dealt in the same Manufactures and other 3Merchandizes that were Burnt, and other Trades again that got by them when they were in full Employed, were to Vote against those who lost by the Fire; the Rejoicings would equal if not exceed the Complaints.

"Keynesianism" gone mad; or rather, carried to its consistent conclusion.

Mandeville's defence of the "vice" of luxury was enough to outrage both the rational economist and the Presbyterian in Francis Hutcheson. In rebuttal, in a prefigurement of Say's law, he pointed out that "income not spent in one way will be spent in another and if not wasted in luxury will be devoted to useful prudent purposes." Luxurious spending, then, is scarcely necessary for economic prosperity. In fact, he went on, it is the thrifty and the industrious who provide prosperity by supplying goods to the public. Declared Hutcheson: the "good arising to the public is in no way owing to the luxurious, intemperate or proud but to the industrious, who must supply all customers." Ridiculing Mandeville, the ordinarily sober Hutcheson riposted: "Who needs to be surprised that luxury or pride are made necessary to public good, when even theft and robbery are supposed by the same author [Mandeville] to be subservient to it, by employing locksmiths?" The money saved by not spending on luxury (or locks) would be profitably employed elsewhere, unless all other wants had been totally saturated, that is, "unless all men be already so well provided with all sorts of convenient utensils … that nothing can be added."

As a general proposition, Hutcheson called for liberty and the natural right of property. As he put it in his System:

each one has a natural right to exert his powers, according to his own judgment and inclination, for those purposes, in all such industry, labour or amusements as are not harmful to others in their persons or goods, while no more public interest necessarily require his labours …. This right we call natural liberty.

An unexceptionable statement, except for the ominous vagueness in the concept of public interest that "requires a man's labour."

Hutcheson's devotion to laissez-faire, however, was limited and guarded. Thus, in his Introduction to Moral Philosophy, he opines that "the populace often needs also to be taught, and engaged by laws, into the best methods of managing their own affairs and exercising their mechanic arts." In international trade, for example, Hutcheson was mired in old-fashioned mercantilism, advocating state regulation to insure a "favourable balance of trade," and high protective tariffs as well as government subsidies of shipping, to develop industry.

Hutcheson's devotion to natural rights was weakened still further by his being the first to adumbrate the chimerical and disastrous formula of utilitarianism: "the greatest happiness for the greatest number," possibly after having acquired it or its equivalent from Gershom Carmichael.

The specific influences of Hutcheson on Adam Smith will be detailed further below; suffice it to say here that the order of topics of Hutcheson's lectures, as published in the System and as heard by young Smith at the University of Glasgow, is almost the same as the order of chapters in the Wealth of Nations.