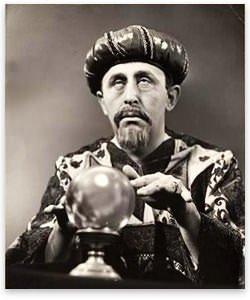 It's that time of the year. Not only are chestnuts roasting over an open fire and Jack Frost nipping at your nose, but whether you ask for it or not, those in the prediction business are rolling out their prognostications for 2010.

For those wanting to know whether the economy will grow and what those phony government GDP numbers will be in the coming year, there are economists lined up to provide you with a guess. Stock-market investors will have no shortage of market mavens telling them what will happen in the markets in the next 12 months. And for those seeking assurances of what the future holds in the longer term, there are plenty of futurologists out there to clue you in.

The New York Times reports that President Obama's top economic advisor, Larry Summers, predicts that more Americans will be working once the flowers bloom and the birds begin to sing in the spring. He based this prediction on the say-so of "most professional forecasters" who say job growth will begin after the spring thaw.

In 2010, economic growth as measured by gross domestic product (GDP) will be 2 percent, according to Ian Shepherdson, the chief economist at High Frequency Economics. "Mr. Shepherdson's 2 percent estimate for gross domestic product growth next year is roughly half what he would normally expect for a solid economic recovery," the Gray Lady reports. "And a crucial reason is the fact that bad assets on personal and institutional balance sheets are the equivalent of a ball and chain strapped to the economy, he says."

Dennis Kneale over at CNBC predicts the Dow Jones Industrial Average (DJIA) will close next year at 11,650 after some volatility. He's thinking GDP will be up 3 percent and job growth will be robust, while inflation will be nonexistent. Obamacare will stall, Citigroup will vanish, and a mid-term-election spanking of Democrats will keep the president from raising taxes.

At What's Next, the predictions for 2010 (made sometime prior to 2006) include the US armed services being fully privatized, ecotourism becoming a major environmental problem, and most phone calls being free. By the way, in 2011, What's Next predicts that a flat tax system will be adopted in the United States, most newspapers will be free and a highly leveraged US hedge fund will collapse. The Rolling Stones will finally quit touring in 2015 and an atomic device will be exploded in a major city in 2017.

What's Next is published by self-proclaimed futurist Richard Watson, who, according to his website, has some big companies like IBM, Coca-Cola, and McDonalds paying him for his view of the future.

Besides the free predictions that float around, some people and companies pay big money for predictions. But is it money well spent? After all, no one can really foretell the future. "This necessity of guessing the course of the relevant conditions and their possible change during the forthcoming action is called the act of entrepreneurship," Murray Rothbard wrote in Man, Economy and State.

There are just too many actors and too many factors for anyone to see the future perfectly. But that doesn't stop people from selling what they see or others from buying those opinions. After all, "The more unpredictable the world is, the more we rely on predictions," according to marketing guru Steve Rivkin. So, "each year the prediction industry showers us with $200 billion in (mostly erroneous) information," writes William A. Sherden in his decade-old book, The Fortune Sellers: The Big Business of Buying and Selling Predictions.

Sherden's book takes a withering look at "the reign of error" that he calls the "second oldest profession." The predictions business has been around for 5,000 years. "Forecasting was widely practiced in the ancient world in the form of divination, the art of telling the future by seeing patterns and clues in everything from animal entrails to celestial patterns."

Everyone wants to know the future because you can profit from it. As Rothbard explained, the profits that entrepreneurs earn come from "estimating other people's future wants, and this is obviously a far more difficult and challenging task than forecasting one's own valuations."

Therefore, much of Fortune Sellers is concerned with faulty predictions in the money areas, such as economics, investments, demographics, organizational planning, and technology assessment. Sherden devotes a chapter to weather prediction, which is not much better than George Carlin's Hippy Dippy Weatherman's "Tonight's forecast: dark. Continued dark tonight, turning to partly light in the morning."

Sherden also dedicates a chapter to futurology, the prediction of societal change, as well as a chapter on science, where he points out that "no one knows when or if global warming will take place and what the consequences will be for human activity around the world."

In his chapter "Corporate Chaos" Sherden casts doubt on the idea that business leaders can plan effectively for the future, and argues that nationalized industries and government agencies "do not stand a chance in competing against world-class rivals." And the more complex an organization becomes, the less controllable it is. Although power can be concentrated at the top, the author quotes Peter Senge, "The perception that someone 'up there' is in control is based upon an illusion — the illusion that anyone could master the dynamic and detailed complexity of an organization from the top."

Stock-market gurus especially get hammered by Sherden. There is lots of money at stake. For those that get the future right, it can mean millions or even billions of dollars. "For most people, however, the odds of getting it right are little better than chance," writes Sherden, explaining that the market is a complex system composed of millions of minds. The author interviewed Vanguard's chairman, John Bogle, who conceded that gambling and investing are a lot alike. "When you cut through it all, it's a fool's game. And never confuse skill with luck, especially during a bull market."

Sherden doesn't consult the Austrian School in his work. Fortune Sellers would have benefited if he had.

Ludwig von Mises pointed out in Economic Freedom and Interventionism that a person who thinks they can have someone tell them when the crash will come and thus sell at the top of the market, "overlooks the fact that this knowledge could be helpful to him only if he alone has it, while all other people are still bullish. But how could this occur if, as popular opinion assumes, economic doctrine enables the economists to predict the day of the crisis?" If economists could make such a prediction, "Nobody would derive any advantage from the economists' forecast; at the very instant this forecast was uttered and accepted as correct, the crisis would already be consummated."

Although economists are highly involved in the prognostication business, their forecasting skill is about as good as guessing. Sherden lists several reasons that complex systems — such as the economy — are unpredictable. There are no natural laws governing their behavior. Complex systems cannot be dissected into their component parts. These systems are highly interconnected. Complex systems exhibit periods of order but also unexpected moments of turmoil. Complex systems adapt to their environments but have no fixed cycles.

Sherden's book has some valuable insights, but when it comes to forecasting and predicting, Mises gets the last word.

"If it were possible to calculate the future structure of the market," Mises wrote in Human Action, "the future would not be uncertain. There would be neither entrepreneurial loss nor profit. What people expect from the economists is beyond the power of any mortal man."